Reorganized from the 106th A.A. Automatic Weapons Bn. and re designated as the 623rd F.A. Battalion. Federally recognized January 29, 1947 with headquarters at Glasgow. Re-entered Federal service January 23, 1951 at Glasgow. The only unit of the Kentucky National Guard to actually serve in Korea during the Korean War. Arriving there in December, 1951 and taking part in the following campaigns: Second Korean Winter - Korea Summer-Fall 1952 - Third Korean Winter - Korea Summer 1953 Awarded the Navy Unit Commendation and the Korean Presidential Unit Citation Through the decades after World War Two, members of the Kentucky National Guard took on many challenging jobs in their home state. They guarded property and helped repair damage after a wave of tornadoes struck Kentucky in April, 1974. They patrolled the campus of the University of Kentucky during protests against the Vietnam War. They controlled riots on the streets of Louisville, tried to keep the peace during strikes. They now also help in the fight to control the illegal production of marijuana in the state. And all the while they train to be ready on short notice in case of a national emergency. 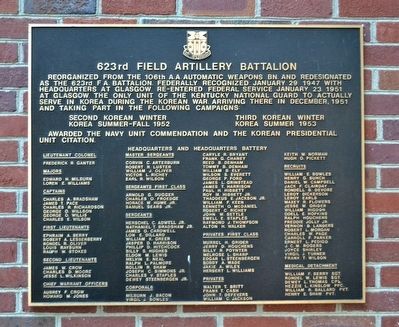 Americans believed that victory in World War One insured a lasting peace. National Guard budgets were small in the 1920s and 1930s. Little could be done to modernize the Guard, although by the late 1930s the Kentucky National Guard did have its own tank company. A new mounted unit, the 123rd Cavalry Regiment, was formed as well. Guardsmen saw frequent duty near their homes. They helped victims of the great flood of 1937, controlled labor strikes in the coal fields, and attended annual summer training camps. Peace, in fact, did not last very long. In 1939 Europe was engulfed in another war, and Japan had invaded China. Mounting tensions between the United States and Germany and Japan made American entry into the war appear inevitable. Early in 1941, the Kentucky National Guard was mobilized.

Kentuckians joined citizen soldiers from other states in training camps and on maneuvers. Many Kentucky units were again assigned to the 38th Infantry Division. Kentucky’s 38th Tank Company went to the Philippine Islands as the Japanese invaders came. After a long defense of the Bataan Peninsula and Corregidor Island, the American and Philippine defenders were overwhelmed. The Japanese force captured survivors to endure the grueling Bataan Death March and years of mistreatment in prisoner of war camps. Of the 67 Kentucky tankers captured, only 37 came home after the war.

Kentucky National Guardsmen returned to the Philippines in 1944. The 38th Division cleared entrenched Japanese troops from the mountainous terrain of Luzon Island. Fighting was especially heavy in the Zig Zag Pass, where an assault by the 149th Infantry, supported by the 138th Field Artillery, finally won a hard nineteen-day battle. The 38th Division earned the title Avengers of Bataan.

Other Kentucky National Guard units fought in the European Theater. The 103rd and 106th Anti-Aircraft Artillery Battalions, formerly a cavalry unit, fought from North Africa, through France and Germany, into Czechoslovakia. After the victory in World War Two, the Kentucky National Guard had to face a new world, one threatened by nuclear weapons and split by a cold war between democratic and communist countries. In 1947 an important addition was made to the Kentucky Guard with the formation of the Kentucky Air National Guard. The Air Guard’s pilots have flown F-51, F-84, and F-86 fighters, RB-57, RF-101 Voodoo and RF-4 Phantom reconnaissance planes, C-130 Hercules transports, and other aircraft on missions all over the world.

The cold war turned hot in 1950 when the army of communist North Korea invaded South Korea. Early in 1951 the Kentucky National Guard’s 623rd Field Artillery Battalion was sent to Korea. From an advanced position in the Mundung-Ni Valley the battalion fired its 155mm howitzers in support of the American Tenth Corps and the First Korean Division. Other cold war crises also required mobilization of Kentucky Guard units. The 123rd Armor and other units were activated during the Berlin crisis of 1961. Air Guard photo-recon planes flew over Korea during the U.S.S. Pueblo seizure incident in 1968.

In 1968 the 2nd Battalion of the 138th Artillery went to Vietnam. From hilltop positions such as Fire Base Bastogne, Tomahawk Hill and Hamburger Hill the Kentucky gunners supported troops of the 101st Airborne Division, a regular army unit normally based at Fort Campbell, Kentucky. The Battalion’s C Battery lost nine men killed and thirty-two wounded when North Vietnamese troops overran Fire Base Tomahawk on June 19, 1969.