One half mile east of this location, a mob attacked a home that was housing some local members of the LDS/Mormon Church as they held worship services with four missionaries assigned to the area. This August 10, 1884 night attack resulted in the deaths of two of the missionaries and two church members alongside a member of the mob believed to have been the leader. This incident is also referred to as "Tennessee's Mormon Massacre". The attack was spurred by unfounded rumors that local members and the missionaries were secretly sending girls to Utah for polygamous marriages. The tensions had occurred for some time before August 10, with mostly fears from other church congregations that the LDS church was growing to fast in the area, yet the issue of polygamy was the tipping point. A roadside marker is located at this address. 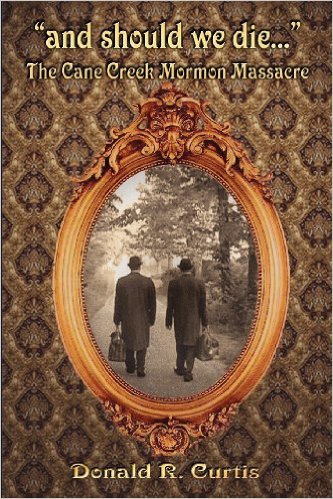 Jim and Malinda Conder shortly after the events of August 10, 1884 with their daughters. A cane can be seen leaning on Malinda 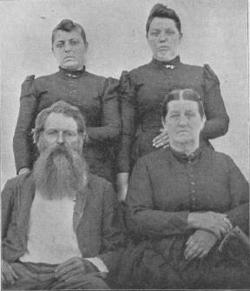 Memorial wreath at funeral the murdered Elders Gibbs and Berry 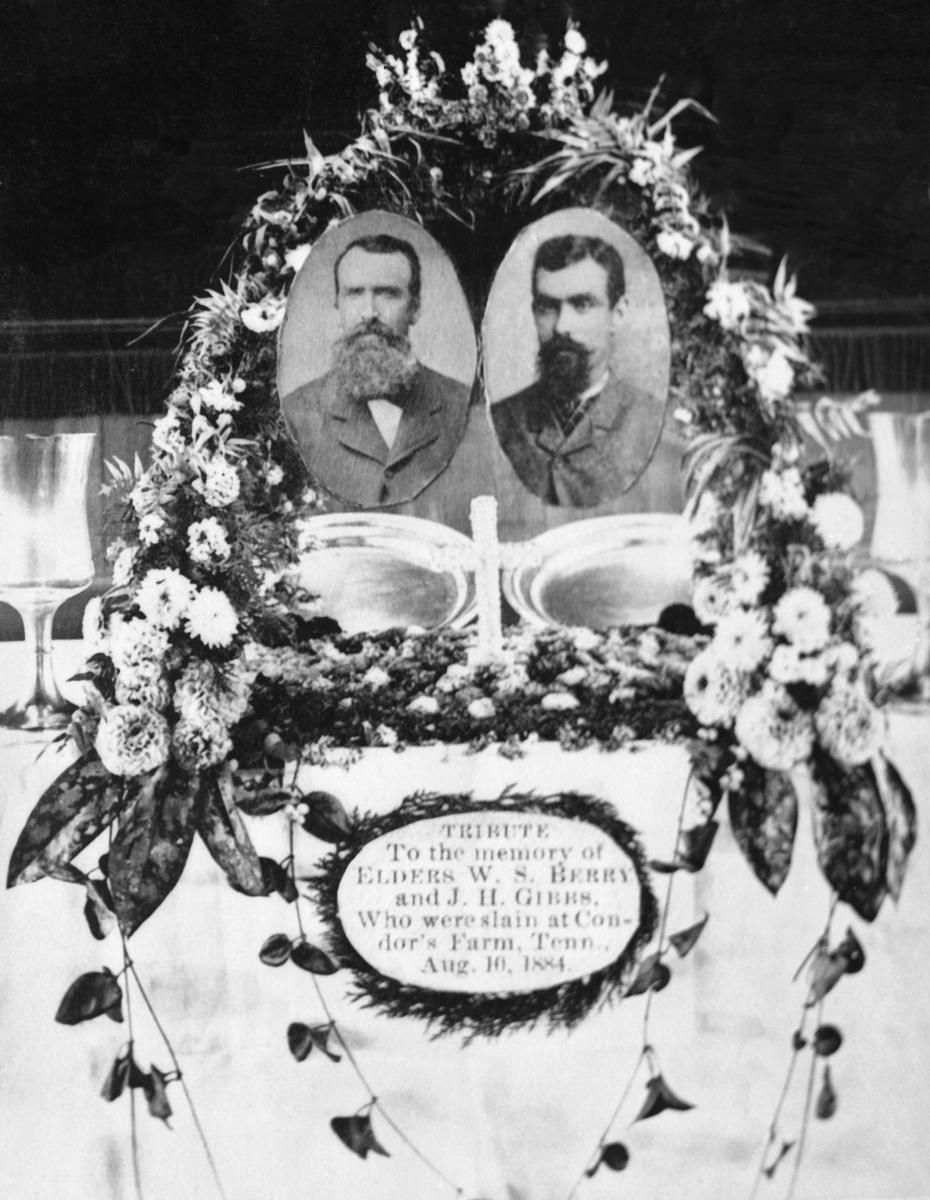 On the spot of the massacre, rests this monument to the Conder sons killed August 10, 1884. John Riley was a stepson 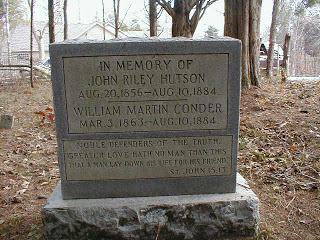 1944 photo of missionaries and local members visiting the Conder monument 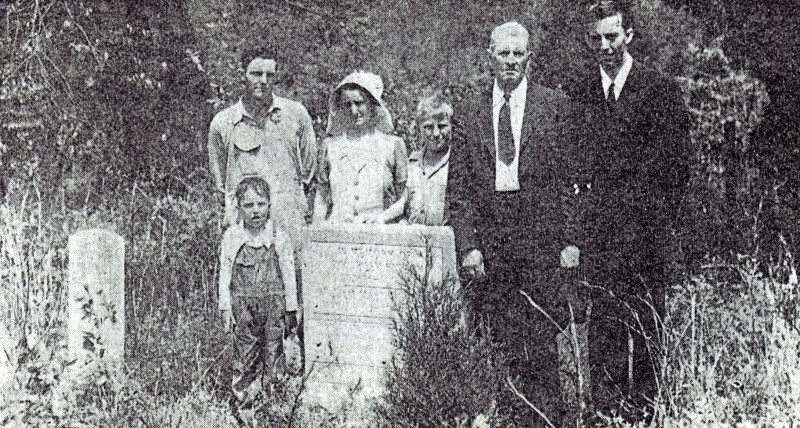 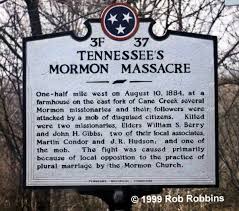 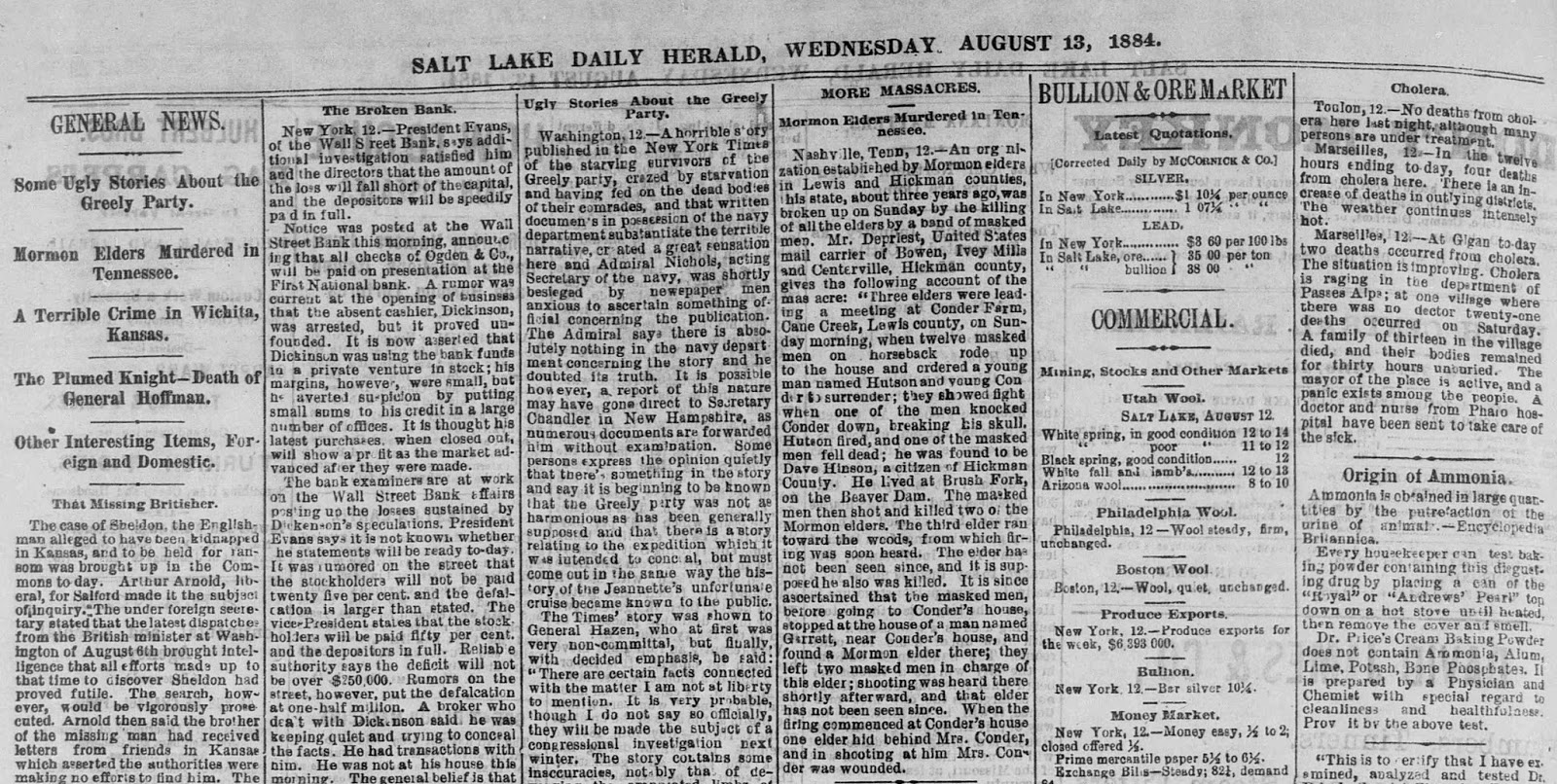 1944 photo of Elder Lindstrom returning home to Salt Lake from his mission in Tennessee. He carries the gun used by John Riley before being killed. The gun was preserved by the Conder sisters and presented to the Church History Museum. 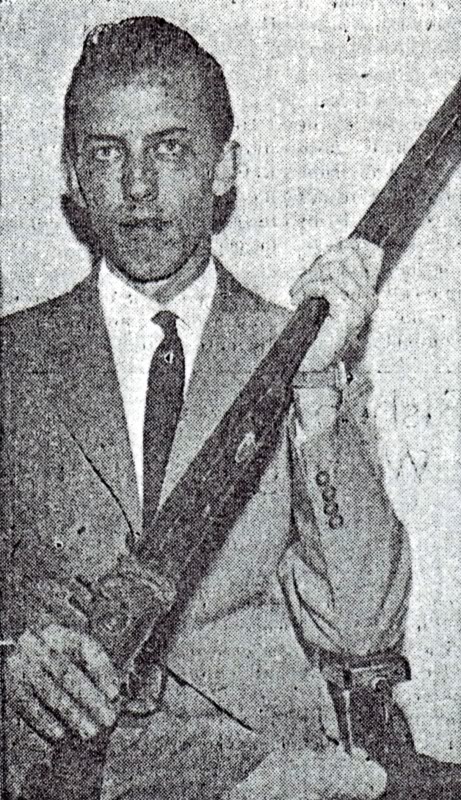 Elders Hawkins and Lindstrom with the Conder sisters, Rachel and Lavicia, in 1944. 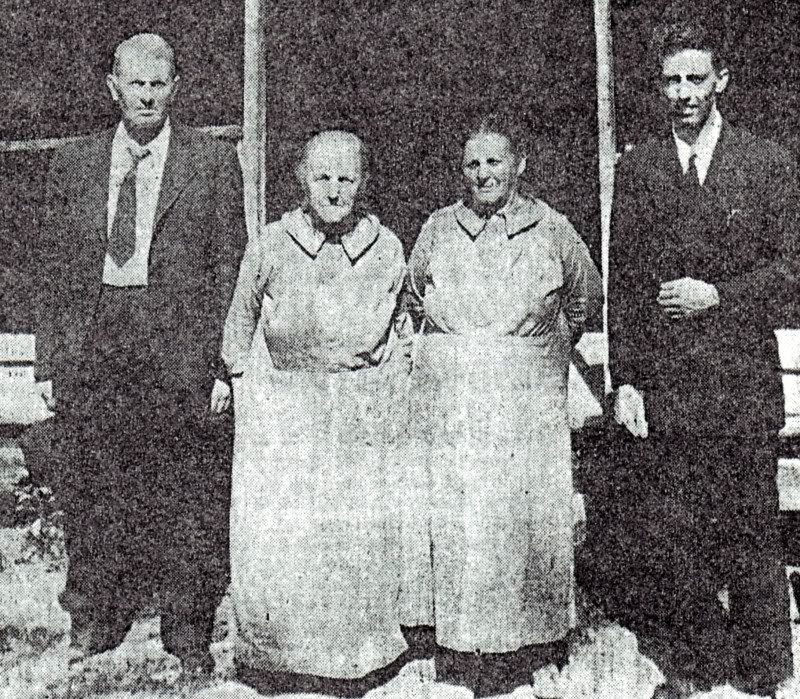 When the first LDS missionaries arrived in Tennessee in 1874, a religious conflict of words and doctrines was begun in Lewis County after the local sheriff allowed the LDS church to proselytize. At the same time the federal government and state and local state and church authorities banded together to denounce the spread of Mormonism because of the practice of polygamy. After the first year, converts to the church occurred and grew and threatened the other faiths.  For over about a decade newspapers published anti-Mormon rhetoric, people investigating the LDS church were threatened, while others were "persuaded" to kick members and missionaries out of their homes and town. Despite the opposition, the presence of the LDS church grew in the county, albeit slowly. By April of 1884, a branch was organized in Cane Creek.

April of 1884 saw the beginning of the conflict turing violent. A family allowed there two daughters to be baptized and agreed to allow them to move to the Utah Territory to join the church. Rumors then spread that the girls were either brainwashed or kidnapped into going to Utah to be forced into a polygamous marriage. These rumors turned simple verbal opposition into heated violence. The first official act of violence occurred in May when the LDS church building was burned down and note was left demanding the removal of missionaries. Not only did the members disregard the note, but convert baptisms increased. As the church building was being rebuilt, church services were held in the home of Jim and Malinda Conder. Anti-Mormon tracts warned neighbors of things even more bizarre compared to a decade ago and demanded the Mormons leave.

On August 8th, one of the four missionaries in the area was shot at, but survived. On August 10th, one of the missionaries, Elder Jones was at a members home printing off some church materials, where he was ambushed upon leaving the home and threatened with death by his disguised captors. These captors however, were seeking Elder Gibbs, for he was more well known and had been in the area longer. Jones was allowed to escape and the mob went to the Conder home. As the congregation in the home began their service and as others toured Conder's orchard, the mob descended upon the house and captured those members outside and with their hostages went into the Conder home. Jim Conrad yelled for his two sons to get their guns, but the leader of the mob shot at one of the sons, only to have the gun misfire so he struck him in the head. Elder Gibbs was then shot and when Elder Thompson was about to be fired on, Elder Berry pushed the gun aside, only to be felled by another shot. In the scuffle, the leader's mask fell off to reveal he was a local farmer. Seeing Gibbs down, the mob left, but then the other Conder son, Riley, ran to the door and shot the leader, David Hinson. Riley was killed as the other mob members fired back. In the crossfire, another church member, Malinda Conder. She would survive but would spend the rest of her life using a cane. The two Conder sons and Elders Gibbs and Berry died, along with David Hinson.

In the aftermath of what came to be knwon as the Cane Creek Massacre, the two surviving missionaries fled to a nearby LDS church building of another branch of LDS members and the news of the shooting was wired to Salt Lake City. Elder B.H. Roberts, in charge of the then called Southern States Mission, went to Tennessee and while disguised, was able to get the bodies of the two dead missionaries back to Utah. The members of the church in the area were then ordered to leave the area by October of the same year or face death if they would not renounce their faith. By October all LDS members and even some nonmembers fled the area and the church in Cane Creek was dissolved. Fourteen years later the branch was reorganized but later dissolved. In Lewis County to there is, as of now, no organized ward or branch to be found. Neighboring counties today have LDS congregations.