In 1771, local settlers protesting against taxation and other colonial regulations organized militias and adopted the name "Regulators." These men clashed with the militia who served the officers of North Carolina Royal Governor William Tryon. The Regulators were easily turned back, but their action helped to unite other colonists-especially in the South-in ways that influenced the American Revolution. Visitors to the Battleground can walk through forty acres of partially wooded land where the Battle of Alamance occurred. The site includes a number of historical signs as well as guides and docents who tell the history of the conflict from growing resentment in the Carolina colony against taxes, dishonest sheriffs, and controversial fees imposed by the representatives of the British Crown in the colony.

This monument stands near the highway and claims that Alamance was the first battle of the War for Independence. However, the Regulators were pushing for reform rather than independence from Britain. 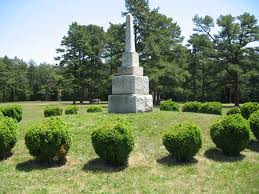 This cabin was built by John Allen around 1780 and stands on the battlefield. It was donated to the state historic site by descendants of the family and is part of the historic park. 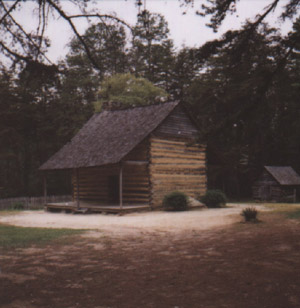 The first use of the term "Regulators" appears in 1768. After years of organization and in response to the perception that Royal Governor William Tyron was ignoring their perspectives and concerns, some of the Regulators began to attack sheriffs and other supporters of the Crown on the frontier. Following one of these assaults, two leaders of the Regulators were arrested. In response, other Regulators issued a threat: release the leaders or they would burn the village of Hillsborough.

Attempts to peacefully negotiate a settlement soon gave way to increased violence throughout the frontier. On May 16th, 1771, Regulators decided to attack the government directly in hopes of spurring a local revolution that would result in a new colonial government that was more friendly to the will of frontier settlers. Visitors to the battleground can see the approximate position of the Governor Tryon's men represented by red flags. The Regulators position are represented by the blue flags. The Battle of Alamance lasted only two hours and resulted in the Regulators being pushed back from the field.

While many accounts suggest that the Regulators were poorly organized and armed, historians emphasize the similarities between the militiamen on both sides in terms of training and leadership. The determining factor, according to historic site manager Bryan Dalton, was that Governor Tyron's forces had artillery that allowed them to push the Regulators to the defensive after the first thirty minutes of battle. As Regulators fell back to the trees to take a defensive position against the heavy fire, a growing number of men found self-preservation to be the better part of valor and abandoned the field.