Angola-Louisiana State Penitentiary, is also known as the "Alcatraz of the South," was built in the 1830s. Like Alcatraz, the prison is surrounded by so many natural barriers that a prison fence was never necessary. The penitentiary includes a small museum that offers interpretive displays about the history of the prison, along with artifacts that were collected from both the inmates and the people in charge of the penitentiary. Many of the museum visitors are family that tour the exhibits after visiting loved ones who are serving time at the Angola-Louisiana State Penitentiary. Others travel to the remote site specifically to learn about the historic prison. The museum's exhibits are always changing, and a guest can expect to see a variety of collections, such as photos, videos, tools, and other things that pertain to the penitentiary's inhabitants- inmates and wardens alike. 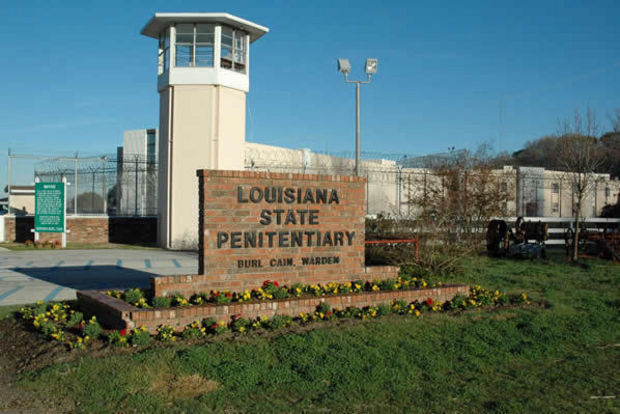 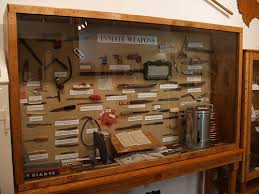 An inmate about to participate in the long-running rodeo 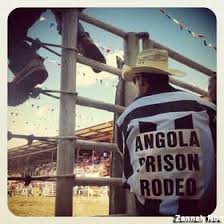 Before becoming known as the Angola-Louisiana State Penitentiary, this prison's  name was Angola Prison and had mostly African Americans residing in it's cells.  It was built and established in 1835 and is spread over twenty-six square miles. This prison is home to those that are serving a sentence of fifty years to life, or even more unfortunately waiting for death row. Convict labor took place here, and as the main way that most of the prisoners were punished and controlled. Prisoners worked without pay, and sometimes were even leased out to people outside of the prison system to work for them.This unpaid labor was a large source of profit for both the prison and the state, but the heavy manual labor took it's toll on the angry prisoners. Many years after the prison had been reformed and renovated, it soon became known as "The Bloodiest Prison of the South" mainly because of the assaults that happened involving the inmates who frequently were involved in fights due to their treatment.
In this prison many of the wardens afflicted pain upon the inmates, for any and every reason they could find. Treatment of the inmates got so bad that thirty-one prisoners sliced their Achiles tendon to bring the attention of poor treatment. In times of hardship and tension, some prisoners decided to take fate into their own hands and make their own weapons to protect themselves from both their fellow prisoners and their wardens who often beat them for no reason. Stabbings were not unusual in this place of unrest.  Eventually the state of Louisiana got the Angola Prison under control, and due to that is still up and running to this day, in fact, it received its accreditation from the American Correctional Association in 1994.
The Angola-Louisiana State Penitentiary still stands today, but prisoners are treated with dignity and care now, and can even participate in recreational activities. One such activity is the Angola Prison Rodeo that takes place at the prison every Sunday in October. This rodeo, started in 1965, is the longest running prison rodeo that there had ever been in the nation. Prisoners get together and ride bulls, and the public is welcome to watch and donate to the prison, as all donations from the event are used to further improve the educational and recreational programs that are offered to inmates. Inside the museum, some interesting commodities that are offered includes photos and stories of past wardens and security guards, as well as inmates. A shelf containing contraband that former inmates created can be seen, as well as the largest and most popular prison magazine in the nation- "The Angolite". Outside of the museum, visitors can explore a small building called "The Red Hat", which was where extraordinarily dangerous slaves were kept behind steel doors without heating, windows, or air conditioning. The museum is free and open to the public, with a gift shop open for all visitors' penitentiary keepsake needs. In fall of 2015, a museum cafe will be opening and visitors can be personally served by an inmate in a halfway program.