The Vanderbilt Mansion, also known as "Hyde Park," is one of the most grandiose mansions in the historic Hudson Valley. Down the road from the home of Franklin D. Roosevelt, the Gilded Age mansion was designed by the famous McKim, Mead & White firm for Frederick W. and Louise Vanderbilt; it took three years to complete. The Beaux-Arts style mansion sits on 200 acres of property which also features hiking trails, formal Italian gardens, gate houses, a coach house, and pristine views of the Hudson Valley. Hyde Park became a National Historic Landmark in 1940 and has been owned and operated by the National Park Service since then.

The Vanderbilt Mansion in Hyde Park 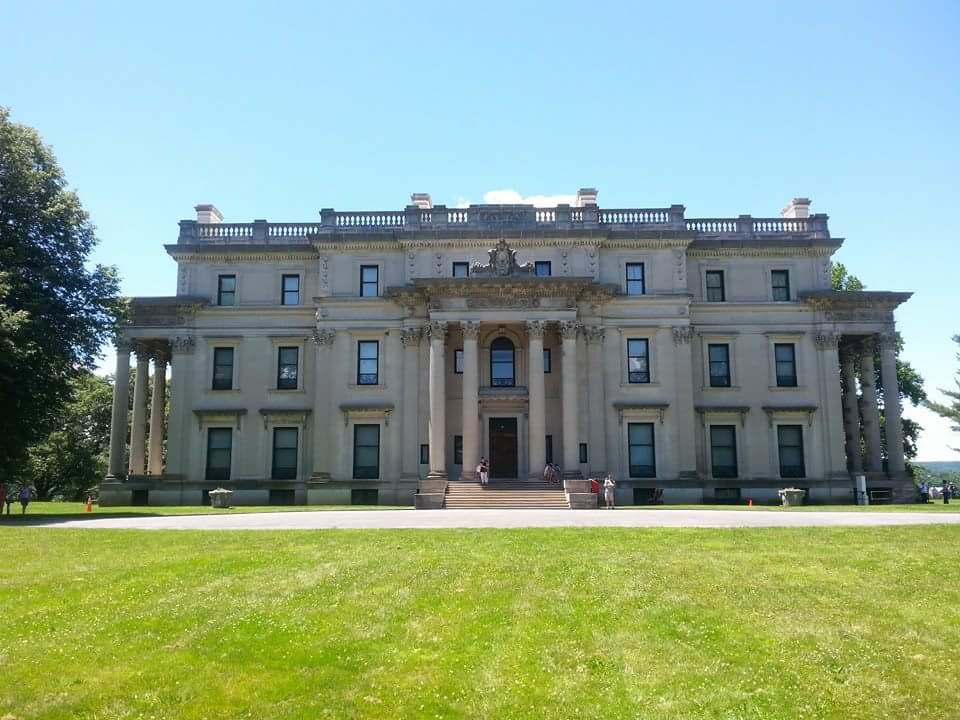 The Vanderbilt Mansion Shortly After Completion in 1900 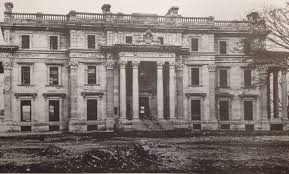 Side View of the Vanderbilt Mansion 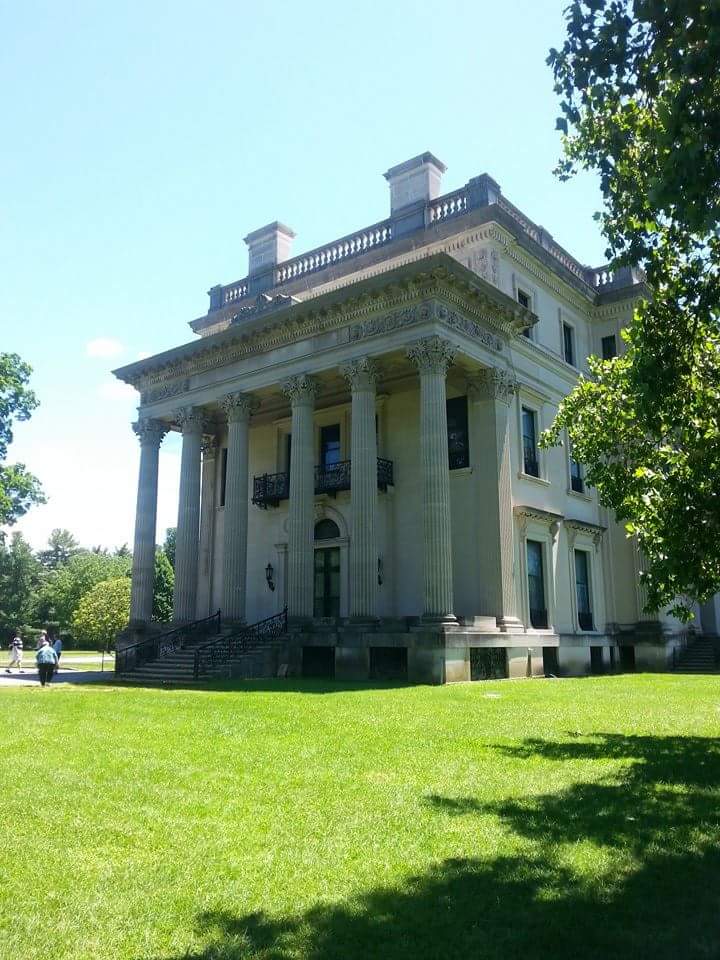 View of the Vanderbilt Mansion from the Air 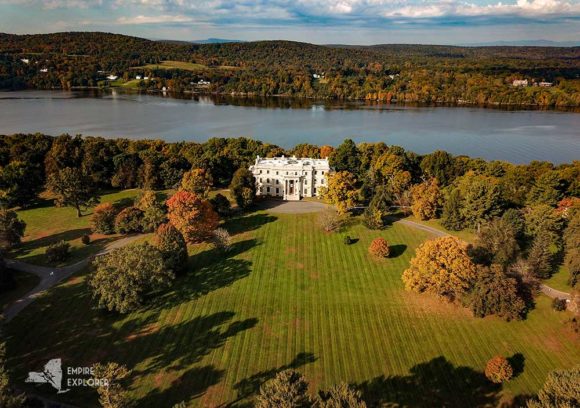 The Vanderbilt Mansion in the Fall 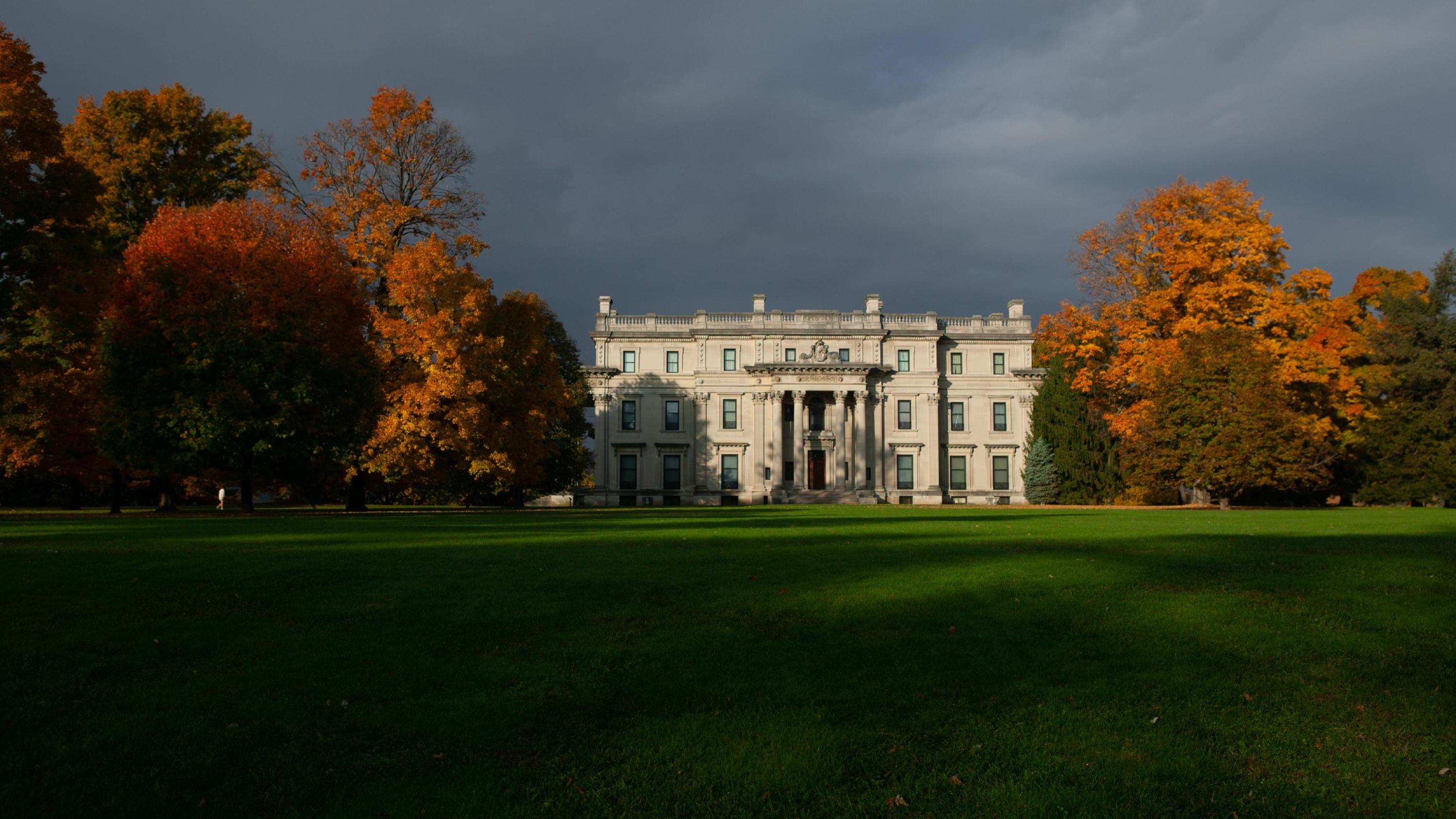 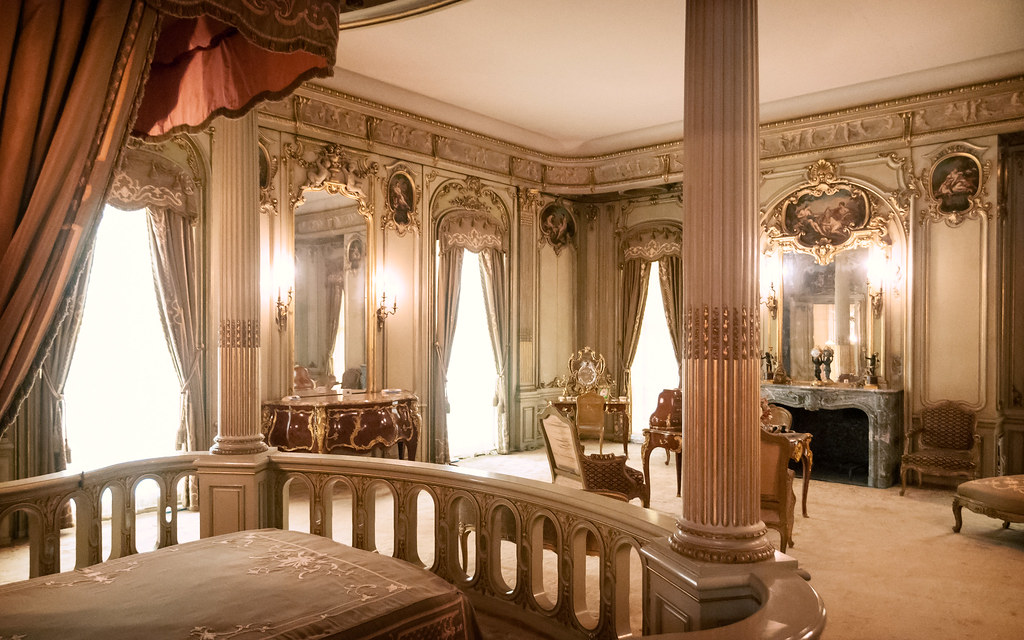 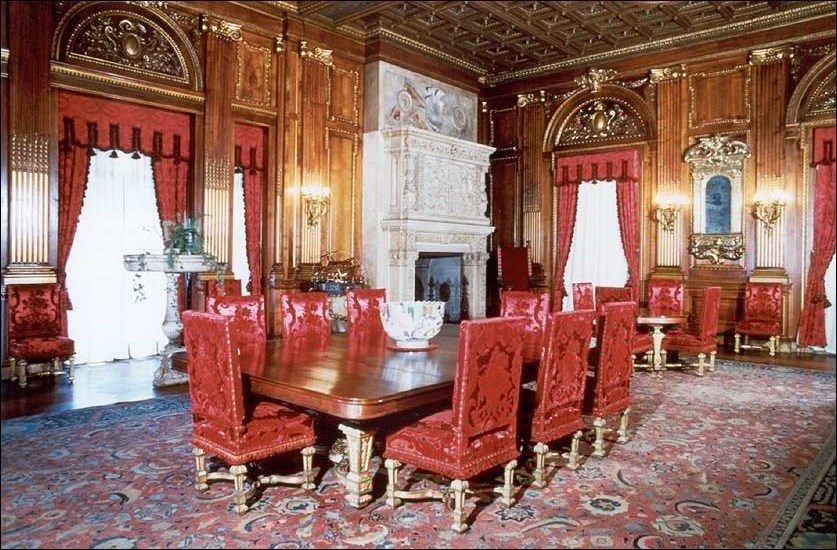 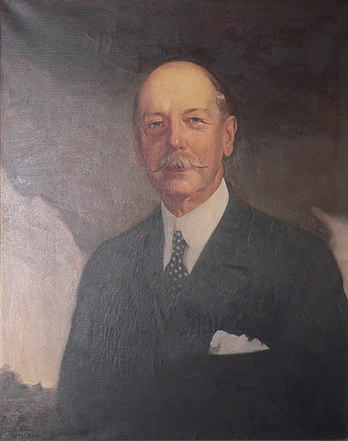 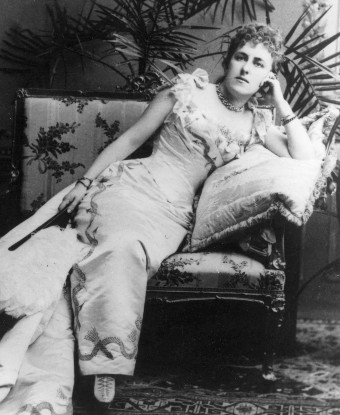 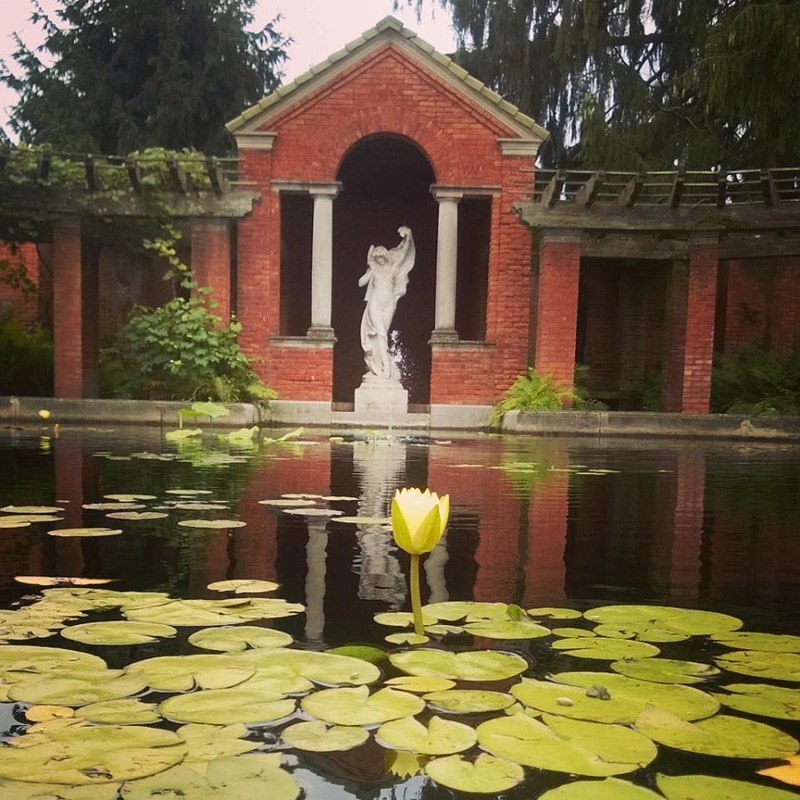 Hyde Park was purchased by Frederick William Vanderbilt, the grandson of Cornelius Vanderbilt, and his wife Louise in 1895. Years before the Vanderbilts became owners, Dr. John Bard, who served as George Washington's physician, called it home. In 1772, Bard built a residence that would be called the "Red House" on the east side of the Albany Post Road, and a cottage across on the other side. Bard acquired a total of 1,500 acres consisting of a farm, a store, and boat landings, one that would come to be known as Bard's Rock. Dr. John Bard left the estate to his son Samuel, who built a mansion that overlooked the Hudson Valley. After Bard, it belonged to a notable horticulturalist named David Hosack, as well as descendants of John Jacob Astor, Dorothea and Walter Langdon.

When Frederick and Louise purchased Hyde Park in 1895, they bought more than 600 acres on both sides of the Albany Post Road. When it became apparent that the Langdon home was structurally unsound, the Vanderbilts chose McKim, Mead & White to serve as architects for their seasonal home that ended up costing around $2.25 million. The selection was unsurprising considering the firm designed countless homes for members of New York's elite society. The new design followed what the Langdons had before, a classical look with pilasters and a semicircular portico. The home evokes both the Italian Renaissance age and the Beaux-Arts style with gate houses, perimeter walls, and other smaller residences throughout the property. Beside the mansion is a stucco building that the Vanderbilts lived in while the mansion was being completed, and then they turned it into a guest house. When the Park Service took over the estate, it served briefly as an inn and restaurant before it turned into offices and a visitors center.

While at Hyde Park, the Vanderbilts' lives revolved around the outdoors, consisting of playing golf and tennis with friends or going on carriage rides. The focus on agrarian life is evident with the existence of the formal Italian gardens, greenhouses, and a carriage house. Frederick was a passionate farmer, even earning a degree in horticulture from Yale. Including the farm operations, the Vanderbilts employed more than 60 employees. Inside the mansion, the ground floor is arranged in a classical design, featuring a large living room and dining room, as well as a den and office for Frederick Vanderbilt. Hyde Park is the smallest of the Vanderbilt mansions, yet it is filled with imported marble, French tapestries, velvet, and expensive wood paneling brought in by at least four interior design firms. Also throughout the mansion are great pieces of furniture and building components that were imported from grand European estates. The formal dining room can host up to 30 guests at the grand table, and the fireplaces and carved wood ceilings were imported from Europe. On the second floor, Louise's grandiose bedroom is modeled after that of a French queen's during the age of Louis XV, with a railing around the bed and silk wall coverings hanging above the bed.

In May of 1899, three years after construction began, Frederick and Louise Vanderbilt hosted their first party at Hyde Park. The Vanderbilts only used Hyde Park as a seasonal home, as they also had residences in New York City, the Adirondack Mountains, Bar Harbor, and Newport. In 1926, Louise Vanderbilt died. Frederick Vanderbilt remained at Hyde Park until his death in 1938. Frederick and Louise had no children, so the estate was left to a niece, Margaret Van Alen. President Franklin D. Roosevelt, a neighbor who described the mansion as "a hideous albatross in the Hudson River Valley," proposed to Van Alen that the home be signed over to the National Park Service. In 1940, Van Alen signed the property and mansion over to the government and it was opened to the public shortly thereafter. The 50,000 sq. ft. mansion and the 200 lush acres it sits on is more than a representation of the wealth and grandeur of the Vanderbilt family, it pays homage to that of the Gilded Age.

The Visitor Center is open from 9:00 AM to 5:00 PM. Tour times vary during the year. Check the National Park Service website for more information.