The dawn of the Civil War on April 12, 1861, following the 1860 election of President Lincoln and the December 1860 secession of South Carolina, had extensive negative consequences across the United States. Many northern states faced serious financial ramifications from the devaluation of southern bonds. In Wisconsin, bonds from southern and border states backed nearly three-fourths of Wisconsin bank notes. At the outset of war in April, 1961, Milwaukee politician Alexander Mitchell and the Bankers’ Association (along with 45 allied country bankers) discredited the banknotes of 37 banks in an attempt to stabilize the financial situation. Newly defaulted bank notes eventually reached circulation, and in late June, 1861, an unusual amount reached Milwaukee’s workingmen. Riots inevitably erupted when the workers could not cash their paychecks, and the Milwaukee Zouaves (5th Wisconsin Infantry Regiment) had to be called to dispel the riots. Wisconsin Governor Alexander Marshall declared martial law in response to the riots. 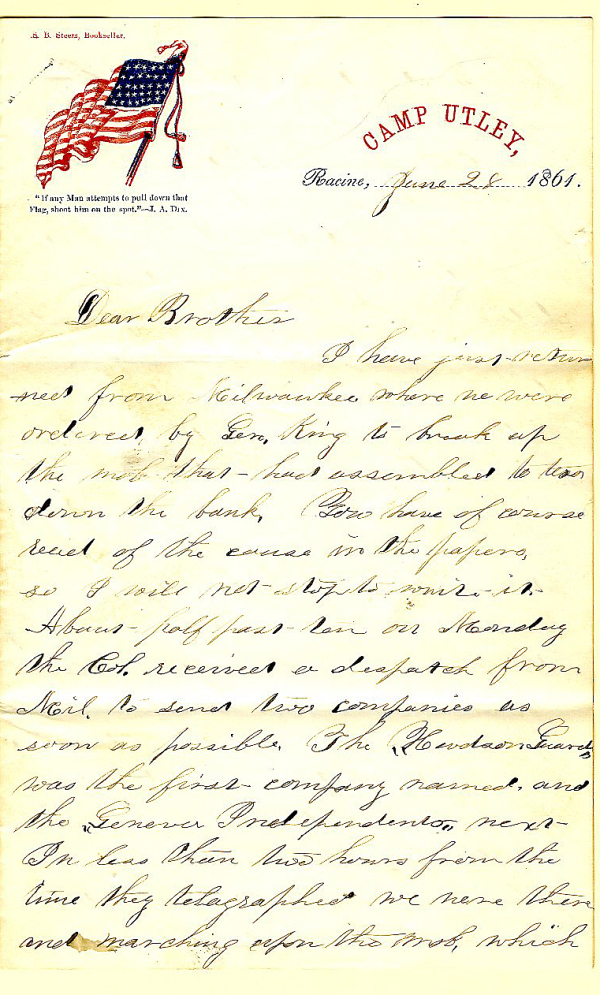 History of the Milwaukee Bank Riots

The Wisconsin banks and the overall economy were on the verge of an attractive recovery in 1860 until the secession of the South challenged the stability of the system as well as confidence in southern . As noted, southern and border state bonds back three-fourths of Wisconsin bank notes, and the devaluation of these bonds led to banks retiring bank notes or adding collateral. In Milwaukee, the actions undertaken by Alexander Mitchell and the Bankers’ Association in April 1861 were later credited as saving an essential part of the banking system. At the time, however, the Bankers’ Association eliminated questionable banknotes from circulation at a large discount from the people unlucky enough to own them.

On the other side, Milwaukee citizens remained suspicious and entirely unsure of which banks were accepting or discrediting various bank notes, as the situation offered widespread confusion. In response, many Milwaukeeans hastily spent questionable bank notes, although many businesses were reluctant to take such notes, effectively stalling the local business environment.

Information was a privilege in this banking fiasco between April and June, 1861, and large groups of German workers in Milwaukee, as well as others, were nothing less than confused about the bank notes. Then, on Friday, June 21st, 1861, Mitchell and other Milwaukee bankers secretly listed 10 more bank notes as unacceptable. Bankers cleansed their vaults, and passed the discredited bank notes to the manufacturing firms picking up their weekly payroll packages. At the end of the next working day at these firms, after the banks were closed, the manufacturers payed their employees with a worthless currency.

The following Monday, Mitchell listed the 10 discredited and unacceptable currencies, and a mob inevitable gathered and attacked several banks in downtown Milwaukee.1

The following is the New York Times coverage of the riots, published on June 26th, 1861:

The feeling against the banks which has been growing for some days, culminated this morning in an attack on them by the mob. was first attacked, and all the furniture destroyed. Mr. MITCHILL, with several clerks, was in the building at the time of the attack, one of whom was taken out insensible.

The mob afterwards attacked the State Bank of Milwaukee, the Bank, and Martin's Broker's office. The damage done to these was very great. The Montgomery Guards, Capt. O'ROURKE, were called out by the Mayor, but after arriving on the ground refused to act. The Zouaves were then called out, and fired on the mob with buckshot. Fears are entertained that there will be sad work this afternoon.

The riot to-day caused a greater loss of property than at first was supposed. The attack is ascertained to have been a regularly organized one throughout. Yesterday, meetings were held in the upper part of the city, and about 10 o'clock this forenoon, the rioters marched from the Sixth and Ninth Wards, through East Water-street, to the Mitchell Bank, attacking it with stones and bricks, soon riddling the windows completely. The clerks barricaded the doors, in order to gain time to secure the valuables, which they did in a great measure. The mob then broke down the doors, and soon stripped the room of everything, throwing the furniture and books into the street. The State Bank, on the opposite corner, and J.B. MARTIN'S office were then attacked, and served in like manner.

The Bank of Milwaukee was also stoned, but suffered little damage. ALLEE & MCGEORGE'S real estate office was completely gutted, and the books, valued at $6,000, destroyed. The Junean Bank was also an object of their wrath, but they were contented with breaking the windows.

The Mayor and Police were promptly on the ground, but were utterly powerless.

The Montgomery Guards, a company of 40 men, were ordered out, but declined to do anything for fear of being overpowered. The Zouaves were then ordered out, and charged on the mob, which immediately broke and run. The streets were soon cleared, and a guard was stationed at the street corners, and a squad at each bank.

About fifty rioters were arrested and confined in jail, under a strong guard of Zouaves and Home Guards.

This evening the mob are in force in the Second and Sixth Wards, where inflammatory speeches are being made. They have one cannon, and threaten to attack the jail to-night, unless their friends are released.

The Governor has declared martial law, and telegraphed to Racine and Madison for State hoops, who will arrive to night.

As far as can be ascertained, the following are injured:

Mayor BROWN, knocked down by a stone; slightly hurt.

One rioter was badly cut in the shoulder, and another had his band cut off. One was wounded in the leg by a thrust with a bayonet.

The riot was caused by the action of the bankers Saturday, in throwing out the circulating notes of a large number of the Banks of the State.

All is quiet in the city to-day, though a constant guard is kept at the jail and in the streets. There is no apprehension of a fresh disturbance to-day.”2