Baker Mansion was built between 1844-1848 for Elias Baker and his family. Today, the mansion is home to the Blair County Historical Society. The Society was established in 1906 and operates several historical sites throughout the county. The mansion is home to a research library and museum, with a variety of rooms dedicated to the Baker family, as well as exhibits related to military history, early industry,women's history, business, and education 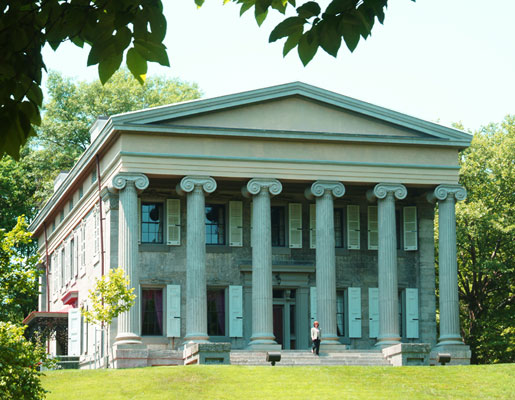 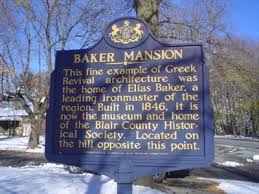 Elias Baker purchased the Alleghany Furnace in 1836 in a partnership with his cousin Roland Diller. This and other investments allowed Elias and Betty Baker to build the mansion, which was located near the Alleghany Furnace.     In 1844 Elias Baker purchased his cousin's share in the business and secured a contact with Baltimore architect Robert Cary Long Jr. to build a new house for his family. Construction began in 1845. After multiple delays, construction was complete in 1849 for a total cost of $15,000. Betty gave birth to their third and fourth child at this home. Unfortunately, their fourth child Margaretta died at the age of two from diphtheria.
Elias Baker passed away in 1864 while Betty remained in the home until her death in 1900. Their son Sylvester Baker and their daughter Anna remained in the mansion until Anna passed away in 1914. After Anna’s death, the mansion remained closed until 1922, when Blair County Historical Society leased the building. The society used the building to operate a museum, and in 1941, the society was able to purchase the building due to donations from a variety of community members . In 2001, major exterior rehabilitation to the building was completed. Tours through the mansion are available by appointment.