The Kernstown Battlefield on the Pritchard-Grim Farm

TheKernstown Battlefield Association operates this site seasonally and offers exhibits, trails and walking tours, and weekly events that preserve the 1854 Pritchard House and interprets the history of the First and Second Battles of Kernstown. The battles occurred in 1862 and 1864. The First Battle of Kernstown was the first in the Shenandoah Valley and the only defeat of Confederate General Thomas "Stonewall" Jackson. In the Second Battle of Kernstown, Confederate forces under General Jubal Early won a decisive victory that proved to be their last in the Valley. Following the Battle, Abraham Lincoln placed General Philip Sheridan in charge of Union forces in the region and his 1864 campaign saw Union victories at Cedar Creek and the Third Battle of WInchester and ended with the Union in firm control of the Shenandoah Valley.

Pritchard-Grim Farm has only been farmed by four families since 1735. 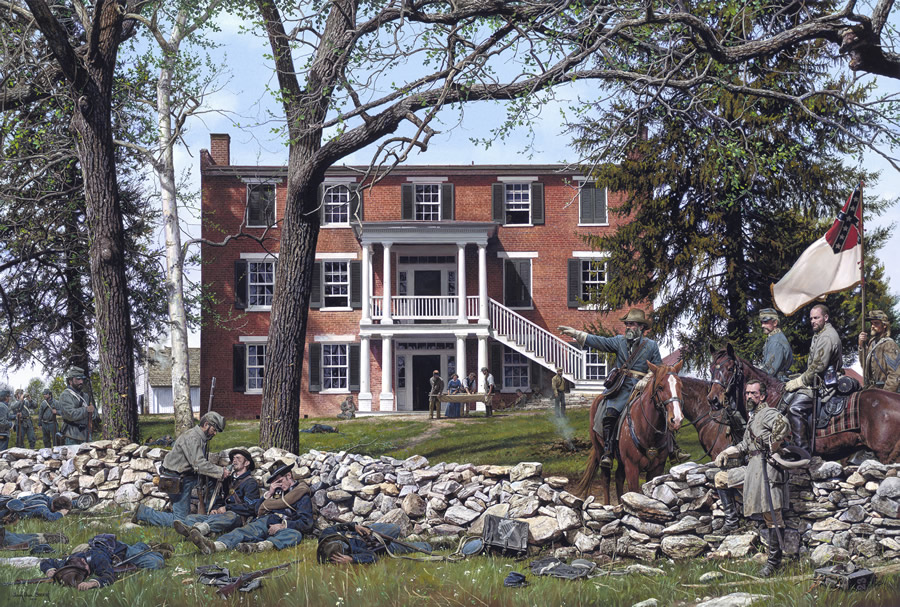 historical site marker for the battlefield. 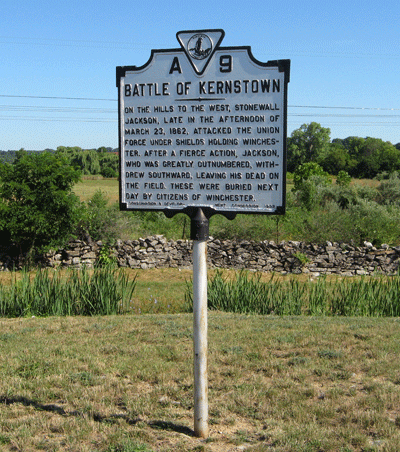 The first battle of Kernstown took place on March 23, 1862. General James Shields Union army of approximately 8,500 men who were under the command of Colonel Nathan Kimbell. General Thomas “ Stonewall” Jackson commanded 3,800 men and advanced south of Kernstown to Barton Woods.

Over the course of Jackson`s campaign in the Shenandoah valley then Colonel Turner Ashby`s scouting efforts led to many successes for Jackson. However, Ashby did occasionally fail this task. One of these failures came during the first battle of Kernstown. After performing his reconnaissance Ashby reported to Jackson that a retreating Union columnn was roughly four regiments of infantry. In reality, the union force was more than double the strength of Jackson`s. Not knowing the true strength of the Union army Jackson attacked and the first battle of Kernstown began.

The battle began with the strategic placement over the Valley Pike of the Union army. The Unions had 16 artillery pieces on Pritchard Hill. At this time, Jackson ordered Colonel Fulkerson and General Garnett to attack Pritchard Hill. Stonewall Jackson’s Confederate army suffered heavy losses as a result of this attack. After encountering heavy fire, they were able to move westward to safety. Kimball then ordered his infantry to Sandy Ridge with the goal of protecting the stone walls lining the ridge. Jackson’s Confederate army was able to inflict heavy gunfire on the approaching Union troops. Later in the afternoon, the Confederates became outnumbered and also began running out of essential supplies such as ammunition. Jackson became famous for his saying here “ I do not recollect of ever having heard such a roar of musketry.” This would become the first battle ever fought in the Shenandoah Valley and Stonewall Jackson’s only tactical loss.
The second battle of Kernstown took place on July 24, 1864. At this point in the war, the main focus was not in the Shenandoah Valley but more so to the Richmond area where the Union forces had increasing hopes of ending the war. As a result of this, there really wasn’t much attention paid to the valley. In fact, there was only one Union presence here under General George Crook. His army had less than 12,000 soldiers. General Jackson was killed prior to this in Chancellorsville, Virginia in 1863 by friendly fire. The Confederate army was now under the command of Lt. General Jubal A. Early. His army now had approximately 17,000 soldiers in it. They began by pushing north from Strasburg towards Winchester with the intent of forcing Crook out of the city of Winchester. General Crook was unaware of how large the Confederate army was and he still believed that he only faced a small army. Opequon Church would be the furthest point that Crook and his regimen made before being forced to retreat back after encountering fierce fighting.
Union Colonel James Mulligan attempted to rally his troops but his force was quickly outflanked and Mulligan was mortally wounded while standing behind the wall. While attempting to pull Mulligan to safety, he reportedly exclaimed: “lay me down and save the flag.” Mulligan was then carried to the Pritchard house, but despite the care of the family, his wounds were too severe and he perished three days later.

At the end of the battle, Jubal A. Early had inflicted 1,185 causalities on the Union army. Early and his troops moved towards Maryland and Pennsylvania. General Philip Sheridan assumed control of Union forces in the Valley.