This factory has been in operation since 1957 and has changed ownership several times but remains one of the largest cold rolling mills in the world with 62 acres of production facilities. The factory produces metal products used in many industries and is the largest employer in Jackson County. The 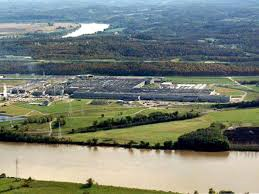 Constellium was originally built by Kaiser Aluminum and Chemical Company in 1957, but by 1989 it was sold to the Ravenswood Aluminum Corporation. Ravenswood Aluminum Corporation changed its name in 1997 to Century Aluminum of West Virginia after buying most of the land and plant from Kaiser. Century Aluminum was later acquired by Pechiney Rolled Products which was later sold to Alcan Rolled Products in 2003. The company was acquired by its current owner, Constellium Rolled Products, in 2011. In recent decades, plant ownership has been embroiled in legal cases with former employees related to pay and benefits as well as numerous cases involving state and federal environmental issues.