On May 13, 1857, in nearby Van Buren, Arkansas, LDS Apostle Parley P. Pratt was gunned down from behind by the ex-husband of a lady that had become one of Pratt's plural wives. Hector Mclean was outraged by the acquittal by a judge that deemed a lack of evidence of children clothe's kidnapping (only law he could use) and interference of marriage (and the judge found McLean's drinking and proven wife-beating factors as well), McLean found Pratt and shot him from the behind. Pratt at the time was serving as a missionary in the then called Eastern States Mission. He died two hours later and buried in a the local Wynn Family Cemetery, by request of the Wynn family. 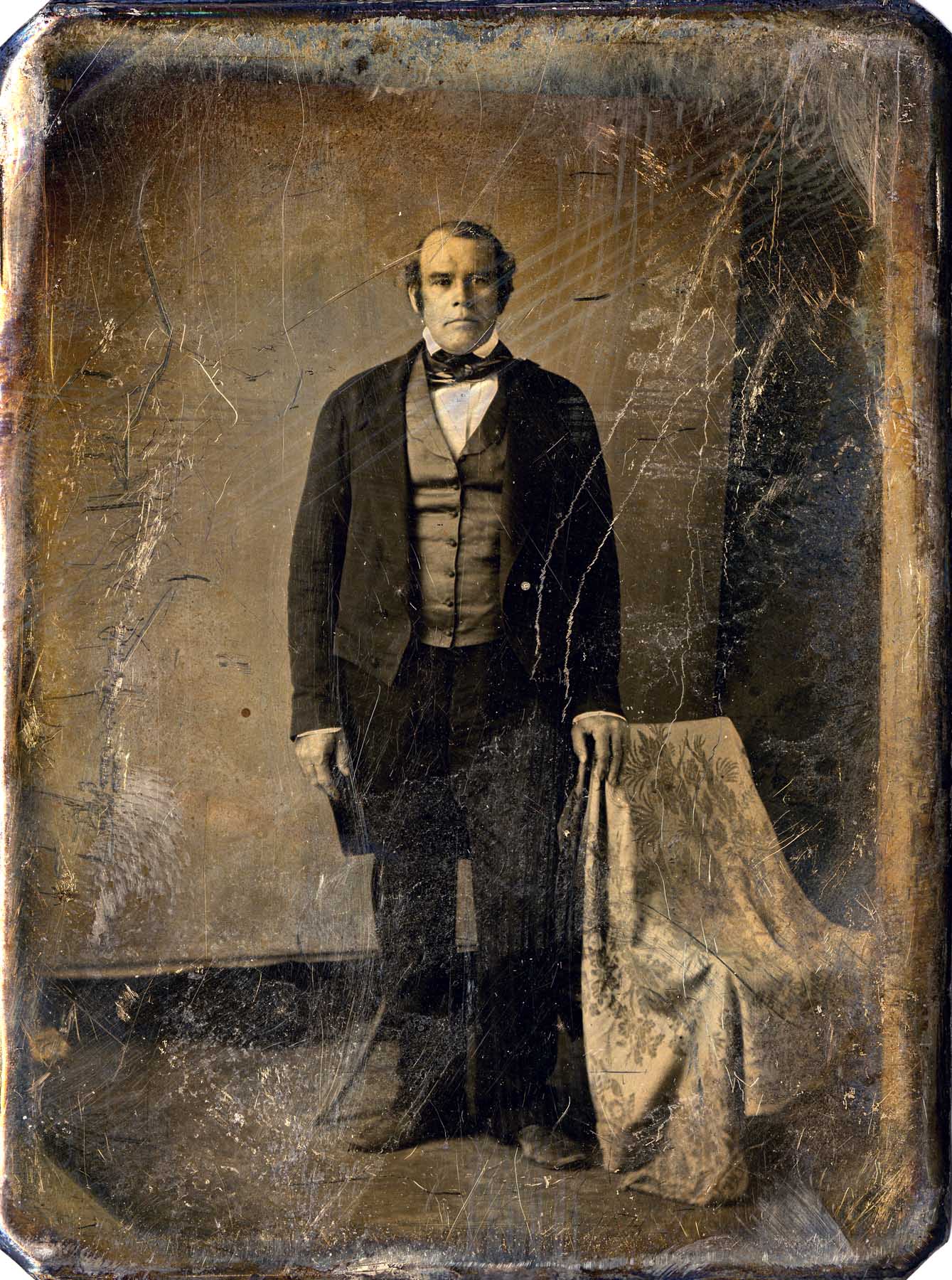 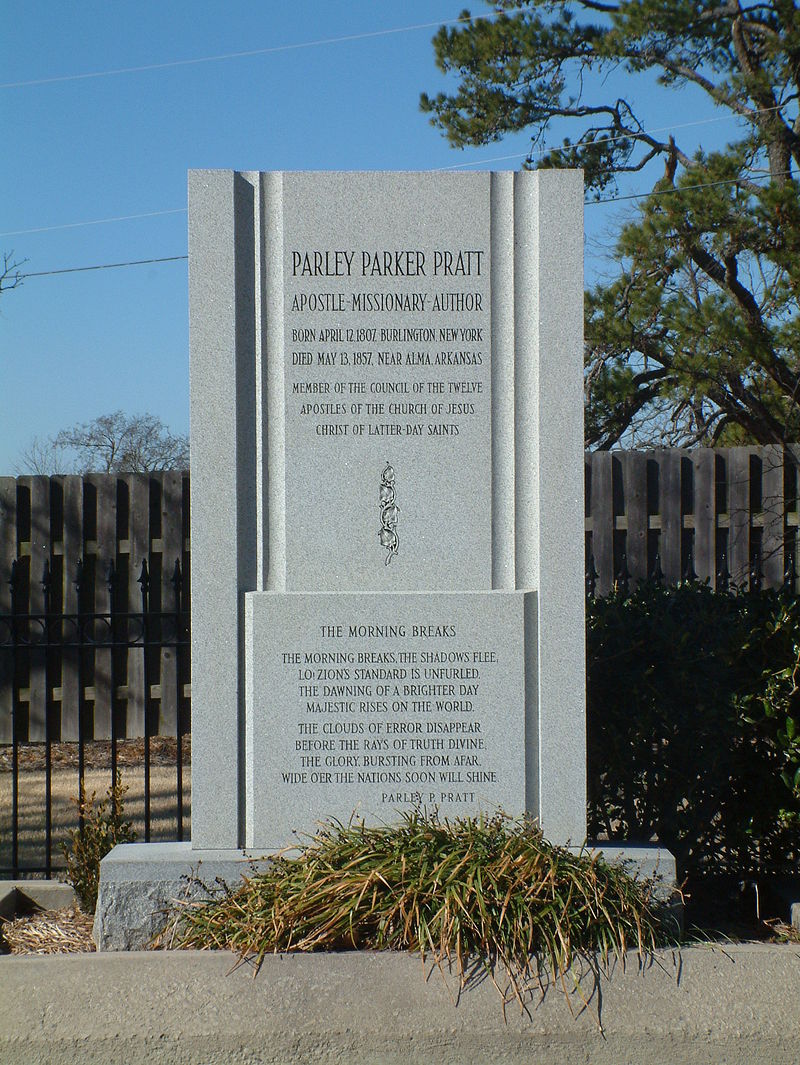 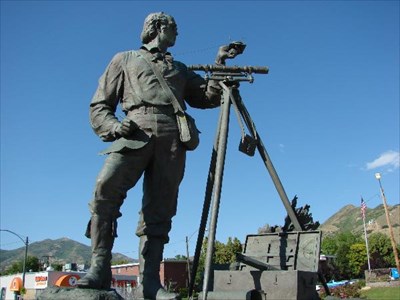 Parley P. Pratt was born in Burlington, New York on April 12, 1807. IN 1827 he married Thankful Halsey and they settled near Cleveland, Ohio and joined the Reformed Baptist Society, under the tutelage of Sidney Rigdon (future counselor in the First Presidency of the LDS Church). In 1830, while both visiting family and proselytizing in western New York, Pratt came across a copy of the Book of Mormon in the home of a local Baptist deacon. Convinced of the veracity of the book, he sought out Joseph Smith Jr. and his family in Palmyra, New York and baptized September 1, 1830.

From 1830-1835, he helped settle the church in both Kirtland, Ohio and parts of Missouri while serving missions in New York and Illinois. After anti-Mormon violence drove Pratt and some others out of Missouri, he joined the church's efforts to redeem the Saints in Missouri, an effort called Zion's Camp. Not wholly successful, it helped temper the violence and Pratt returned to his family Missouri. They then settled to New Portage, Ohio (now Barberton) and was soon thereafter ordained an Apostle of the church, one of the first to be called. At this time he was also editor of the church's newspaper The Millennial Star. Following the murders of Joseph Smith Jr. and his brother Hyrum, June 27, 1844, Pratt stayed with the church, then under Brigham Young and the other Twelve apostles and trekked to the Salt Lake Valley.

From 1835-1852, Pratt served in missions all over the world: Upper Canada, again to New York, the British Isles, Chile, some Pacific Islands and California. At the same time he penned many poems, hymns, including "The Morning Breaks" and a handful of works such as The Key to Science and Theology and A Voice of Warning. He was also falsely imprisoned in 1838 in Missouri, but managed to escape.

While in the Salt Lake Valley, he was chosen to be one of the few members to participate in polygamy. Over all he had 12 wives. He met his last one Eleanor McLean (she had left her husband Hector, but no chance to divorce him) while serving as a Mission President in California, living in San Francisco in 1854. Eleanor had joined the church in California and followed Pratt back to Utah and then to Arkansas. Before leaving to the Arkansas/Indian Territory (now Oklahoma) area, he was one of the legislators for the Utah Territory.

Upon arriving to the Arkansas/Indian Territory area, he had been followed by Hector McLean. McLean accused Pratt of stealing his wife Eleanor and their kids and had Pratt arrested in the Indian Territory. What had happened was while the McLean kids were in New Orleans with family, Eleanor found them and took them to Utah while Pratt was serving in New Jersey, Pennsylvania and Ohio before heading to Arkansas. Eleanor then met Pratt after she left Texas in the territory. Hector followed as well and accused Pratt of stealing the clothes of his children (kidnapping of kids by a parent was not a crime at the time) and for stealing Eleanor, thus ruining his life. The case was hear in Van Buren, Arkansas and the judge found no evidence of the charges, but was sympathetic to Eleanor for it was proved that she had left Hector due to his drinking and wife--beatings. Soon after Pratt was released, McLean found him and shot and stabbed him in the back. Two hours later Pratt died from blood loss. Before dying he asked why this had happened, said he was accused of stealing children and ruining a marriage, which he denied and stated he had only saved an oppressed woman from abuse and then left his testimony of the gospel and requested to be buried in the Salt Lake Valley. However, a local family, the Wynn's, took care of his body and buried him in their family plot.

In 2008, the descendants of the Pratt went to have his body disinterred and retuned to Utah, yet no body was found. It was soon discovered that the area had been ravaged by the armies during the Civil War and the family cemetery had been partially desecrated by soldiers (which side is not known in full) and most likely his body was taken elsewhere. A monument was dedicated at his gravesite and a monument of Pratt was erected in Salt Lake City.