The Story of the Yankee Air Museum begins in 1941, when Willow Run Airport was built by Ford Motor Company to serve as an airfield for their nearby B-24 bomber factory. This factory was the first aircraft manufacturing complex to use Ford’s automotive mass production technique, an innovation deemed necessary by the impending crisis in Europe. Using these techniques and with the financial support of the military, who paid top dollar for military aircraft, Ford Motor Company built 8,685 B-24 Liberators from 1942 until the end of World War II. At its peak, the Willow Run facility employed over 42,000 people. When the war was over, the airport became the hub for passenger flights and air freight in the Detroit Metropolitan area. In 2004, nearly everything the museum owned was destroyed in a fire, but volunteers and community members have donated money and time to rebuild the museum. The Museum at Willow Run airport in Van Buren Township, Michigan maintains a legacy in the United States dating back over a half century. In charge of preserving and showcasing aircraft from a multitude of different backgrounds, it is a door into the past in multiple respects. It is a must see exhibit for military history buffs, but is also a great one-of-a kind stop for any family traveling through the area.

The first plane was acquired in 1982, a Douglas C-47D Skytrain. The “Yankee Doodle Dandy” is a two engine transport which was built in 1945. 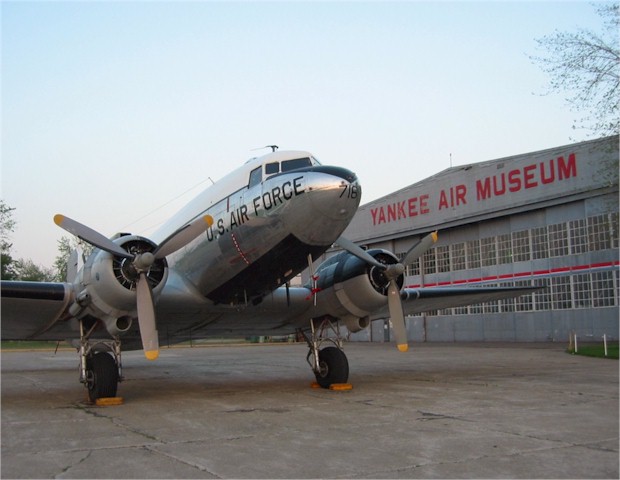 This fire on October 9, 2004, destroyed the historic hangar housing the Museum. Volunteers at the museum saved three of the historic planes from the fire and have worked to rebuild the museum in the past decade.

Since 1981, the Yankee Air Museum has acquired and returned several World War II aircraft to flying status. The first plane was acquired in 1982, a Douglas C-47D Skytrain. The “Yankee Doodle Dandy” is a two engine transport which was built in 1945. Rides on the C-47 are scheduled for the summer months. The B-17G Flying Fortress, a four engine heavy bomber which was used in the movies “Tora!Tora!Tora!” and “Closing The Ring”, was purchased in 1986. The “Yankee Lady” underwent extensive restoration and was returned to flying status in 1995. The B-25D Mitchell, a two engine medium bomber similar to the type used in Jimmy Doolittle’s raid on Tokyo, was acquired in 1987. The “Yankee Warrior” saw combat in World War II and is one of only two B-25Ds still flying today.

“Willow Run Airport was built by the Ford Motor Company in 1941 to serve as an airfield for their B-24 Bomber Plant. This was the first aircraft manufacturing plant to use Ford's automotive mass production techniques, a leading technological innovation of the time. Ford Motor Company built 8,685 B-24s from 1942 until the end of World War II” (Yankee).

A new campaign has been launched to raise the funds to build the actual Museum and its exhibits within the Bomber Plant. The Bomber Plant was most recently the General Motors Powertrain Plant and is on the northwest side of Willow Run Airport. The additional space will allow the Museum to integrate STEM (Science, Technology, Engineering and Mathematics) into its exhibits and programs to inspire young people to pursue education and career opportunities in those fields. The Bomber Plant location re-creates the original excitement of the Yankee Air Museum by bringing the flyable aircraft, exhibits, restoration and educational programs back to a single site. Various pieces of the Museum will move into the Bomber Plant as it is renovated and it is estimated the new Museum will be fully opened by 2017.

Today the Yankee Air Museum events and educational programs are available for the public to experience and enjoy. The flyable aircraft are available for rides so people can re-live an important part of American and Michigan history. The THUNDER OVER MICHIGAN™ Air Show at Willow Run Airport is one of the premier annual aviation events in the country. A new Vietnam War exhibit features a restored F-4 Phantom and UH-1 “Huey” helicopter. The Yankee Air Museum continues in its mission of “Honoring aviation history and its participants through a living, flying museum.”

Once the United States and the other Allied nations prevailed in the war, the manufacturing plant became a good place for air freight and cargo. Then, in 1981, local hard-working citizens of the area opted to transform the space into The Yankee Air Museum that is known today in the area. Initially, the goal was to acquire an original U.S. Army Air Forces hangar and restore it to its original image. But since its founding, Yankee has obtained and returned to flying status five World War II aircraft. The first– a Douglas C-47 transport built in 1945– gained much attention in 1981 when they landed it. Another plane from the Second World War, the B25 Mitchell Bomber, is a part of the museum’s catalog and was used for an unbelievably ceremonious occasion in October of 2021.

On October 4, 2021, at the Charles B. Wheeler Downtown Airport in Kansas City, Missouri, Emma Newland and Freda Renick approached a seasoned American B-25 Mitchell bomber by the name of “Rosie.” Both women, each now 97 years old, were once workers at the WWII-era North American Aviation plant outside Kansas City. They have deep ties to one of the aircraft preserved at Yankee Air Museum. Emma and Freda served their country by working as “Rosies” that helped manufacture the B-25s. And on this day, they were presented with an unexpected treat: seeing in person one of the very aircraft that they helped construct.

Chris Ochsner from The Kansas City Star detailed the return of the “Rosie’s Reply” B-25 Mitchell bomber, along with the noble women that helped build it all them years ago.

“Some of those at the airport to welcome the bomber home were a few of the women who helped build it more than 70 years ago. The iconic image of "Rosie the riveter" came to symbolize all of the women who contributed by working in manufacturing plants to build airplanes and other weapons” (Ochsner).

The Yankee Air Museum, some 1,000 miles away from Kansas City, helped make this happen. It became a Smithsonian Affiliate in July 2011, expanding its mark on our history. It is worth noting, with 2021 close to a finish, World War II ended over 75 years ago. This puts our country at an interesting crossroads, as new generations have a much different memory of The Great War-- if any at all. Taking a trip through the Yankee Air Museum in Southeastern Michigan can help make the events of that time stick much closer to our everyday lives.

“We were both really thrilled to learn that she had worked on this actual plane, it made us both cry,” said Beverly Cowling, daughter of “Rosie” Emma Newland (Ochsner). The B25 Mitchell homecoming in Kansas City, MO is just one event that the Yankee Air Museum can be thanked for. There are still everyday reminders to witness that forcefully testify to the rest of us of what all happened. Tours are offered, along with educational programming and a museum store.