The Oklahoma City National Memorial and Museum commemorates the 168 Americans who died from the worst domestic act of terrorism in American history. Timothy McVeigh detonated a fertilizer bomb at the Alfred P. Murrah Federal Building on April 19, 1995. Following this tragedy, Americans united to honor these victims by erecting a chain link fence, which served as a temporary memorial until the official memorial was completed. President Bill Clinton dedicated The Oklahoma City National Memorial and Museum five years after the bombing.

The Oklahoma City National Memorial at night. The memorial serves as a beacon of hope for survivors and those affected by the bombing. (Courtesy of adventureroad.com) 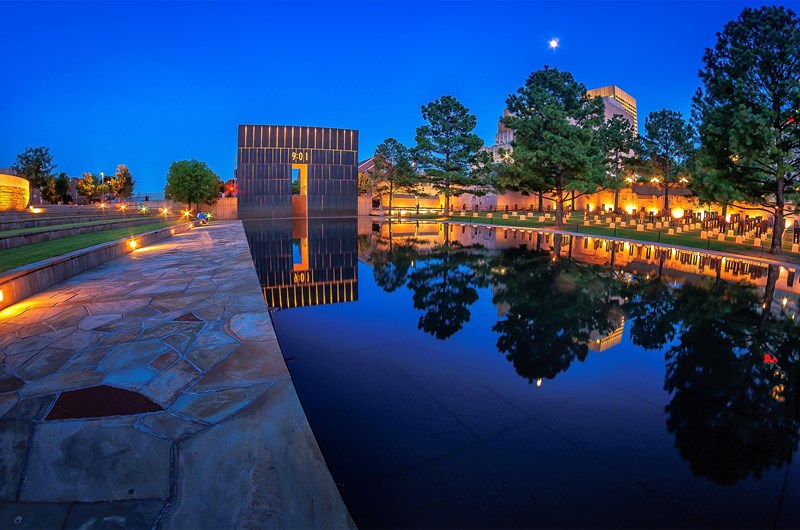 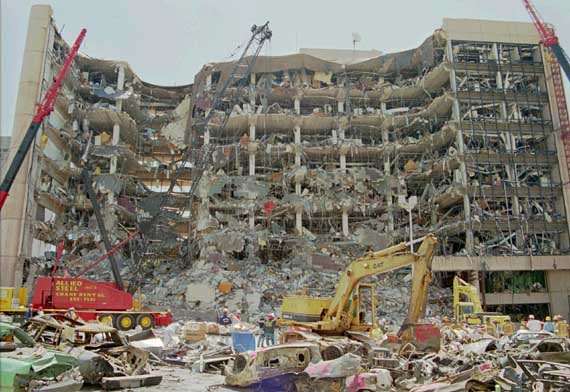 At 9:02 a.m., a Ryder rental truck exploded outside of Oklahoma City's Alfred P. Murrah Federal Building. In the blink of an eye, 149 adults and nineteen children lost their lives, and over 680 people sustained serious injuries. Timothy McVeigh, a Persian Gulf War veteran, orchestrated this attack because he wanted to punish the federal government for its flawed response to the Waco Siege and the Rudy Ridge incident.

In response to this tragedy, Americans rallied together to remember those who lost their lives. In the days following the attack, Oklahoma City residents erected a chain link fence that served as a temporary memorial. People from across the country descended upon Oklahoma City to remember the victims by leaving personal messages, stuffed animals, flowers, and various mementos along the fence. In fact, elementary students from several states sent over five thousand painted tiles to honor the victims. This senseless tragedy elicited an overwhelming response from numerous Americans.

Even though the chain link fence was a powerful memorial, Oklahoma City residents and national leaders decided to construct a professional memorial. The memorial’s advisory board conducted an international design contest, and Hans and Torrey Butzer's design was the best of the 624 submissions. Their creative design resulted in a memorial that consists of seven main sections: the survivor tree, the field of empty chairs, the reflecting pool, the gates of time, the survivors’ wall, the chain link fence, and the children's area. Each of these sections has an important symbolic meaning.

First, the survivor tree is an American Elm that survived the bombing. Even though this tree lost its leaves and suffered severe damage from the bombing, it has managed to thrive over the years. Since 1995, this tree has continued to represent the resilience of Oklahoma City and America because it shows that life continues even after an unthinkable tragedy. Also, the field of chairs includes a chair for each person who died. From a distance, all of the chairs appear to look the same. However, no two chairs are identical. For example, nineteen of the 168 chairs are smaller because they honor the children who perished. These diverse chairs emphasize that 168 unique individuals died. Torrey Butzer explains that the empty chairs not only "speak of the absence" of the victims, but they also "embody their presence."

Furthermore, in the center of the memorial, there is a reflecting pool. This pool appears to have great depth, but it is only one inch deep. The reason for this optical illusion is to show how sorrow can seem much greater than it actually is. Besides its symbolic meaning, the reflecting pool also creates a serene environment for the memorial. Additionally, there is a gate of time at each end of the reflecting pool. The gate directed towards the east has "9:01" engraved on it. This is the minute before the bombing when life was normal. Engraved on the opposite wall is "9:03". This is the minute after the bombing when the healing process began for America.

While the memorial honors those who died in this attack, it also has a survivors' wall to encourage those who lived through this nightmare. This wall consists of the only two walls of the Federal Building that remained standing after the explosion. In addition, the chain link fence that served as the original memorial remains an integral part of the modern memorial. Unlike most memorials, the Oklahoma City National Memorial includes a specific section designated for children to leave messages and drawings. The purpose of the children's area is to show that this bombing has not stolen innocence and hope from people, especially children.