Designed by the US Army Corps of Engineers and completed in 1943, the Pentagon is a symbol of the United States’ military power and strength. The Pentagon has been the site of military planing, anti-war protests, ceremonies honoring soldiers and officers, and foreign terrorist attacks. This unique building houses the US Department of Defense and is the hub of activity during war time. It faced the threat of nuclear attacks during the Cold War and was the site of a terrorist attack on September 11, 2001.

Image of the Pentagon following the attack on 9/11. 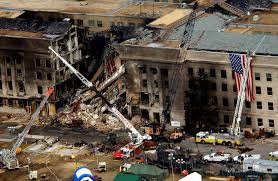 The Pentagon houses the U.S. Department of Defense. Construction of the building began on September 11 of 1941 and was completed in January 1943. 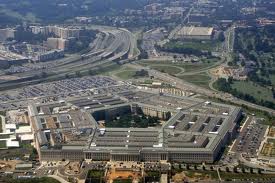 During World War II, President Roosevelt was under pressure to provide a larger, more accommodating location for what was then known as the Department of War, what is now known as the Department of Defense. The original site chosen for the building was known as Arlington Farm and was located just to the east of Arlington Cemetery; this area’s roadways required that the building be designed in the shape of a Pentagon to maximize space. Congress was forced to change locations when protesters said that the proximity of such a building to Arlington Cemetery was inappropriate. The new site was in a place called Hell’s Bottom, and to save time the pentagon shape of the original design was still used although it was unnecessary.

This new building would be designed to accommodate up to 40,000 government employees. With a total floor area of about 6.6 million square feet, the Pentagon building has twice the office space of the Empire State Building. When the building was constructed, bathrooms throughout the US were still segregated so the complex has twice the necessary number of restrooms. Today, the building holds about 25,000 civilian and military employees, at its height during the Korean War the staff reached 33,000 people.

The first major threat to the building was during the Cold War. As the Russians developed nuclear technology, the Pentagon was viewed as a likely target for a nuclear missile. Security measures were heightened and nerves were high as employees in Department of Defense prepared for possible nuclear attack. During the Korean War, the Pentagon was at its height and became the center of all military activity in the US. After the war, because of its prominence, the Pentagon became a major tourist attraction.

The massive office building takes up 29 acres and has more than 17 miles of corridors. Because of its unique design, it takes only 7 minutes to walk to any two points in the building. At its peak, it housed 33,000 workers. The building is most noted because of its five-sided shape. A total of 680,000 tons of sand and gravel were used to make the concrete for the building.Because it was built during war years, the building contains no marble or much of the other ornamentation found in other Federal buildings.

In October of 1967, 35,000 Vietnam War protesters faced off 2,000 federal troops armed with tear gas at the Pentagon. The protesters had rallied and marched across Memorial Bridge in the direction of the Pentagon and shouted down the war. To the protesters, the Pentagon represented the totalitarian nature of the US government and military during the war. Skirmishes arose throughout the night, but no shots were fired by either side. The arrests made and tensions arose that night only worsened the relationship between the government and the protesters.

A massive billion dollar renovation project began in the early 1990s. Then on September 11, 2001, an American Airlines flight was hijacked and crashed into the west side of the building as part of that day’s terrorist attacks on the United States. Everyone on the plane was killed as were 100 people in the building. That section was rebuilt while renovations were ongoing. It has been noted that because of the renovations at the time, several offices that were destroyed during that terrorist act were unoccupied and therefore many lives were spared.

On September 11, 2001, the same group of terrorists who attack the World Trade Center flew a plane into the Pentagon. 189 people were killed in the crash and resulting fires, including the hijackers of the plane, workers in the Pentagon, and passengers; because of ongoing construction to modernize the building, far fewer people were in that area of the building than normal, this coincidence saved countless lives. The fire caused by the crash burned for 36 hours total, extending the damage to the building. It took only one year to complete the renovations to the building and repair the damage caused by the attack, but the effect it had will linger forever. There is now a memorial at the Pentagon honoring those who lost their lives at the hands of the terrorists on that fateful day.

Touring Hours Monday- Friday: 9 am to 3 pm Closed on weekends and federal holidays