The Nitro Explosives Plant was constructed in 1917 in what is now the commercial district of Nitro, West Virginia, a city located in both the Kanawha and Putnam counties. The plant was a large producer of munitions during World War I. It was so large, in fact, that it required approximately 2000 people to operate. At its height, the it produced 350 tons of gunpowder daily. The plant gave birth to the town of Nitro, which derives its name from the chemical produced there, nitrocellulose. 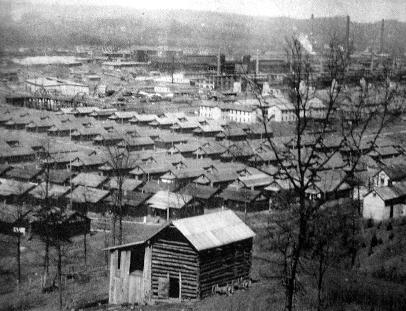 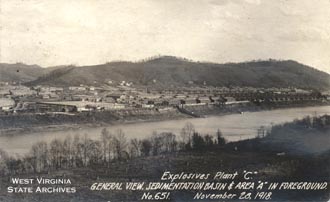 The creation of the explosives plant in Nitro was a  direct result of the United States entering the first World War in 1917. It quickly became apparent that the United States lacked a sustainable amount of gunpowder for the war effort. Congress in response passed the Deficiency Appropriations Act of 1917. This piece of legislation allowed the government to rapidly build facilitates to fulfill the demand for gunpowder. The site in Nitro was chosen because it offered easy access by railroad and the Kanawha River. It was also in close proximity to West Virginia's natural resources, and far enough away from the coast to avoid the risk of being attacked.

Construction began on this massive project just a few months after the Deficiency Appropriations Act was passed. Trains soon began shipping in thousands of people and materials that would be needed to build and operate the facility, as well as homes and businesses to service the people. The original plans estimated that approximately 30,000 people would be placed in and around the explosives plant. The plans called for Nitro to be a self-sufficient town, complete with stores, a hospital, and the massive nitrocellulose plant as the centerpiece. The Nitro explosives plant was constructed in about eleven months, using a work force of 19,000.

The war ended less than a year after the plant opened, and its purpose diminished. At its prime, the plant produced 350 tons of gunpowder a day and required a whopping 2,000 people to operate. When the war ended, the plant ceased production of gunpowder and was prepared to be sold. In a matter of weeks, the town’s population dropped from about 23,000 to approximately 12,000. The plant, which had been controlled by the Ordinance Department, was soon sold to the Charleston Industrial Corporation for $8.5 million.

The former Nitro explosives plant has been sold to numerous entities over the years; at least seventeen businesses have operated at the site. Probably the most notable was the Viscose Company. It produced a new rayon fiber unit in 1937 which allowed Viscose to become the largest rayon staple plant in the world by 1945.