The Battle of Honey Springs was one of the largest Civil War battles fought in the territory reserved for Native tribes in the 19th century, land that would become the state of Oklahoma in 1907. African and Native American troops fought in large numbers on both sides of the battle. In 2013, the battlefield was named a National Historic Landmark by the National Park Service.

Honey Springs Battlefield was designated a National Historic Landmark in 2013 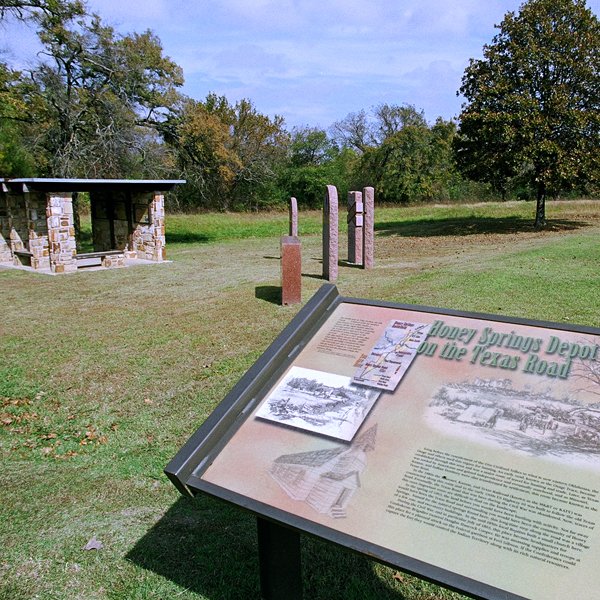 Prior to the Civil War, Honey Springs depot was a waystation on the road to Texas and the location of several natural springs that provided water for travelers and their horses. In 1863, nearly 6,000 Confederates soldiers were sent to occupy the springs. A supplier to the area avoid capture and informed the Union when he reached Fort Gibson at the same time as General Blunt arrived, accompanied by soldiers and artillery on July 11, 1863.

The Confederates planned to attack Union forces at Fort Gibson with the aid of Native American soldiers and 3,000 Confederate troops from the area of Fort Smith, Arkansas, Confederate troops were expected to reach Honey Springs by July 17. Capitalizing on the intel Blunt had secured, he planned on attacking before the rest of the Confederates arrived. Blunt’s forces consisted of three federal Indian Home Guard Regiments recruited from all the Five Nations and the 1st Kansas Colored Infantry, with two cavalry battalions, one infantry battalion, and two artillery batteries.

Blunt's attack began on July 17, 1863, with his main assault beginning in the middle of the afternoon. The weather was cloudy and rainy which caused some ammunition problems for the Confederates. As artillery shells flew back and forth, Blunt saw an opportunity to rush his opponent. He then ordered the 1st Kansas Colored Infantry to charge the enemy position. During the attack, the 2nd Indian Home Guards, fighting alongside the Union, accidentally went out into the open part of the battle also known as no man’s land. The Union commanders ordered their troops back. When this happened, the Confederates thought that the Union was retreating and ordered charge. However, the Union was not retreating and the Confederates charged into the Union's intact lines and were swiftly repelled.

Cooper pulled back towards the ammo depot, but the Union troops pressed hard on his heels. The heaviest fighting occurred when Cooper pulled his troops back to the bridge near Elk Creek. Union forces were overwhelming Cooper’s troops and Cooper once again attempted to turn and fight during his second retreat. Confederate troops made a stand against the advancing Union soldiers a half a mile south of the Honey Springs Depot as their main force withdrew from battle.

The Union victory allowed the United States to maintain possession of the Honey Springs Depot. It was an important victory for Blunt’s soldiers and the death toll for the Union was minimal compared to the Confederates. Blunt had lost around seventy-nine men whereas Cooper had lost six hundred and thirty-seven. The battle also demonstrated the valor of the First Kansas Colored, the first regiment of African American troops to see battle when they defeated Missouri bushwhackers and regular troops along the Kansas-Missouri border in 1862.