Introduction to the Frederick Hotel by Sheila Redling.

The front entrance of the Frederick Building today. 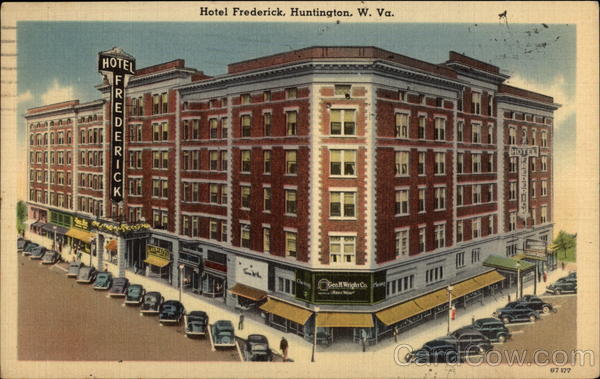 The former Elephant Walk Club is now a the restaurant 21 at the Frederick. 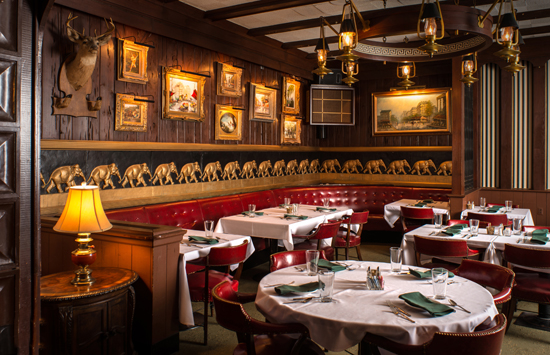 The exterior of the Frederick remains mostly in its original condition, but the large Hotel Frederick sign has since been removed. Image courtesy of the Library of Congress. 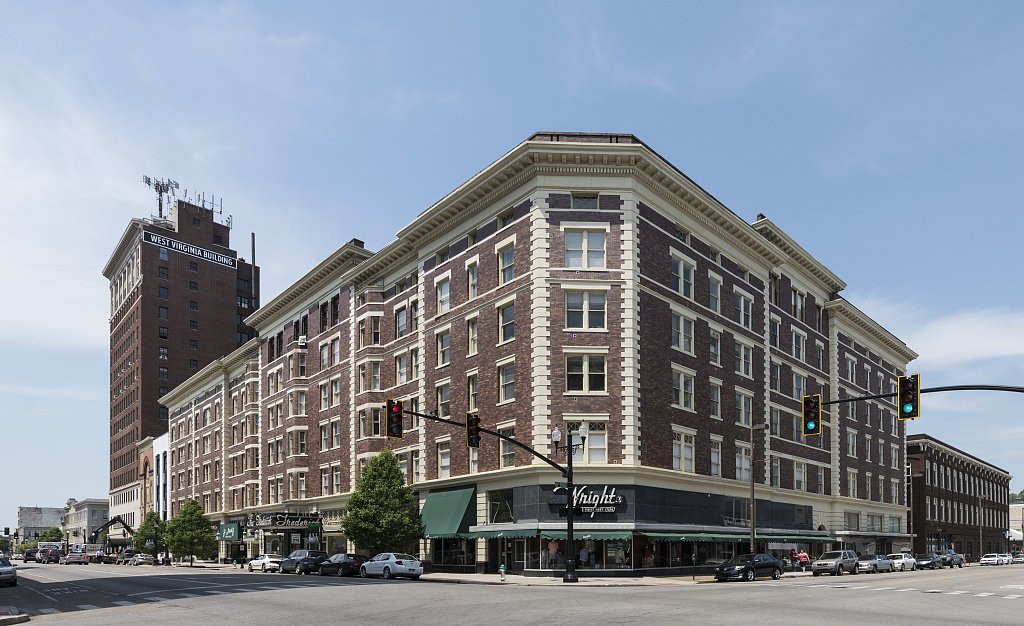 The Frederick Hotel was built by the Central Realty Company of Huntington at a cost of $400,000, with an additional $100,000 for furnishings bought in Chicago. It was designed by noted local architects Edwin N. Alger and James B. Stewart in the Edwardian Renaissance style. Considered one of the most elegant hotels of the time, it was built using 3.7 million bricks, five railroad cars of glass, 300 tons of iron, 200 telephones, and 4,000 electric lights. The hotel was built on an imposing scale, covering almost the length of a football field. A newspaper article published at the time of its opening labeled it “the greatest building project ever begun in Huntington.” The hotel was named after George Frederick Miller, the primary financer of the project.

The Frederick was said to be the most prominent hotel between Pittsburgh and Cincinnati. It contained 150 guest rooms (45 of which had private bathrooms), 65 offices, a bar, billiard room, two dining rooms, a ballroom, pharmacy, cigar stand, shoe shine stand, barbershop, and a Turkish bath. Various retail shops were housed on the first floor. The building also boasted its own emergency power generators and a stained glass skylight. At the time of its opening, it was one of the most expensive hotels in the area; it cost anywhere from $2.50 to $4.00 per room for one night. Many noteworthy figures stayed at the Frederick Hotel over the years, including Richard Nixon, Bob Hope, and Liberace, along with many others who came to perform at the Keith-Albee Theatre across the street. Rumors persist that a secret underground tunnel existed connecting the Frederick to the Keith-Albee, but no evidence has been found to support the claim.

The hotel also housed two luxury restaurants, the Elephant Walk Club and the Colonade Restaurant. The Elephant Walk Club, created by Huntington businessman Bill Ritter and designer John Jenkins, opened in 1964. It was a private club, open only to members and their guests. Bill Ritter was the president of Central Realty, the company that owned the Frederick Hotel, and decided to open a club in the lobby to attract business to the hotel. He and Jenkins looked for a theme and name for the club for quite some time, until Ritter reportedly woke up in the night and saw a book titled Elephant Walk on his nightstand. Once deciding to use this as the name of the club, they ordered all types of gold elephant sculptures and wallpaper to decorate the lobby. The two men were so committed to this theme that they booked a live circus elephant named Shirley, who entered the club doors on her knees much to the amazement of the club guests. Today, one of the elephant head sculptures still hangs in the hotel behind the lobby desk.

Matewan police chief Sid Hatfield and his new bride Jesse Testerman were arrested by Baldwin-Felts agents at the Frederick during their honeymoon in June of 1920. Two weeks after the Battle of Matewan on May 19, Sid Hatfield boarded a train for Huntington with Jessie Testerman; she was the widow of Matewan’s mayor, Cabell Testerman, who had been killed during the incident. Hatfield and Testerman married, but the honeymoon was cut short when the Felts Brothers arrived and arrested Hatfield. Two guns that belonged to Mayor Testerman were found in the newlyweds’ hotel room. Hatfield was accused of murdering the mayor and marrying his widow to take control of the deceased’s estate. Hatfield stood trial but was acquitted for the Matewan shootings. However, a year later Hatfield was murdered on the steps of the court house in Welch by Baldwin-Felts agents.

A decline in occupancy rates forced the Frederick Hotel to close on July 30, 1973. The building remains in good condition, thanks in part its use of special repressed brick in its construction. After closing, the Frederick was converted into a mixed-use facility, and today houses a combination of apartments, offices, restaurants, and retail space. The first floor lobby has been preserved and retains much of its original ornamentation. It also displays many artifacts from the early twentieth century including newspapers, pharmaceutical products, and other common items from that era.