Midway Park opened in 1898, making it one of the oldest continually operating amusement parks in the United States. The Jamestown and Lake Erie Railway built the park as a means of attracting more customers to use its trolleys for transportation. The park featured tennis courts, playing fields, and a dance hall. A large pavilion was added by new owners in 1915. The park changed hands a few times between the 1920s and the 1950s and underwent expansions and updates each time. The Walsh family took over Midway in the 1950s and operated it until the mid-2000s when they sold it to the State of New York. Today, guests can enjoy old and new rides, an arcade, and a museum and gift shop at Midway State Park. 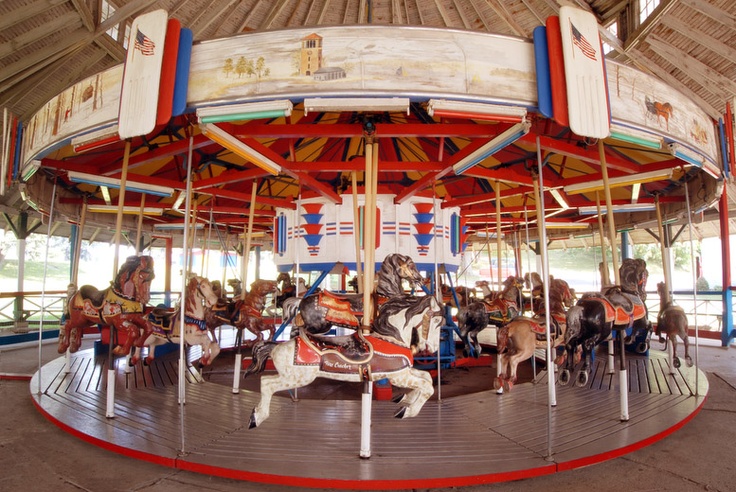 Inside the arcade building. 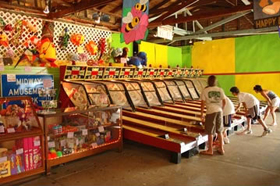 When the Jamestown and Lake Erie Railway decided to invest in an amusement park, they chose a seventeen-acre plot of land known as “Midway,” so-called because it featured a dock midway between two of a local steamship company’s stops. The park held its grand opening on July 12, 1898. The railway soon acquired the Chautauqua Steamship Company and expanded the dock to allow more visitors to arrive at the park via steamship. Two years later, the Chautauqua Lake Navigation Company took over the Jamestown and Erie Railway and with it, Midway Park. The new owner built a 40,000-foot pavilion with space for a dance hall, roller-skating rink, kitchen, bathhouse, and games. The company also commissioned the construction of the Jack Rabbit wooden roller coaster and later a carousel in 1928.

In 1934, the hard times of the Great Depression led the Chautauqua Lake Navigation Company to lease the park to Thomas Carr, who began renovations. Carr had to deal with an ice flow on the lake that destroyed the big dock as well as the deterioration of the Jack Rabbit ride. Despite early setbacks, he purchased the park in 1939. Carr died in the late 1940s, and his family sold the property to brothers Martin and Frank Walsh. The Walshes added many rides to the park in the 1950s, including those aimed at kids, such as handcars, a kiddie coaster, mini-train, and Roto-Whip.

Expansion continued into the 1960s, with the replacement of the Ferris wheel by a larger one and the additions of a Tilto-Whirl and Scrambler. But, like many other amusement parks in the latter part of the twentieth century, Midway Park had to deal with declining attendance. In the 1980s, Martin Walsh’s son and daughter-in-law Michael and Janis became the managers. They helped Midway keep afloat by expanding further. Midway became one of the first parks in the country to install a Dragon coaster, a compact coaster with self-propelled trains, in 1985. Updates were done on the bumper cars in 1995, the arcade in 1997, and other rides in 1998. To celebrate the new century, the Tidal Wave ride was built in 2000. Since then, the Walshes have retired, but they secured Midway’s future by selling it to the state of New York in the mid-2000s.

The park is open from Memorial Day to Labor Day weekend. Hours vary so please check website of call.