Located in the “Upper Quad,” Buchanan Hall (Quad 2) is one of ten residence halls that originally made up the College’s Fraternity Quadrangle. First occupied in September 1964, the hall is named for James Buchanan, Class of 1809, whose lifelong political career culminated in his becoming the fifteenth President of the United States. The building was first used as the home of the Theta Chi fraternity, and later served as a general residence hall. Designed by Howell Lewis Shay and Associates, the building cost approximately $200,000. 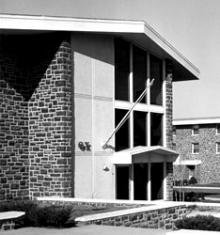