Biddle House was the former home of College alumnus and trustee Edward M. Biddle, Jr., and was purchased by the College on December 14, 1946 at a cost of $25,000. The house was used primarily as living space for men or women, as needed, in different years; it would later be occupied by fraternities and other student groups. The basement provided space for organizations such as the Alumni Office and the Faculty Club. Shortly after Sigma Alpha Epsilon moved out in 1990, Biddle House became the Arts House residence and then the home of campus offices and departments such as Religious Affairs and the Counseling Center. The basement housed the Department of Theater and Dance until 2002, and from 1994 to 2004 the Clarke Center for Interdisciplinary Study of Contemporary Issues occupied the first floor. From 2004 onwards the building has been occupied by the Registrar's Office, the Career Center, and Academic Advising. 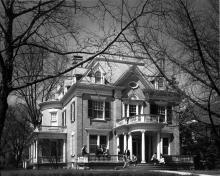