Originally known as West College, Old West's foundation was laid August 8, 1803, and after a little more than two years, classes commenced in the new building on November 4, 1805. Though the plans included space for student housing, there were no rooms ready for student occupancy until 1810. The building was not fully completed until 1821, at an estimated final cost of $20,000. On February 23, 1954 the Durbin Oratory was dedicated in honor of President Durbin, the first to lead the college under Methodist auspices. The famous College Mermaid, which sat atop West College from its earliest days, was replaced with a replica in 1970, the original moving to the Boyd Lee Spahr Library. 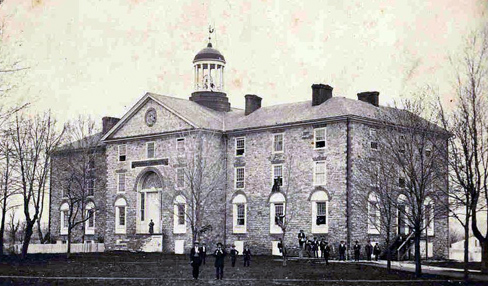 Tragedy struck Dickinson College in Carlisle, Pennsylvania when on February 3, 1803, “New College,” which was more than three years under construction and had only recently begun to be used for school purposes, was completely destroyed by fire. The trustees immediately decided to rebuild, heartened by the support of the local community. Some gentlemen journeyed to the big cities to solicit funds for the project; numerous political leaders of note appear on the list of subscribers from Washington, D.C., including President Thomas Jefferson and several members of his cabinet. While funds were being raised, a committee was charged to secure a plan for the new building. Hugh Henry Brackenridge took it upon himself to travel to Philadelphia to ask Benjamin Latrobe, recently employed as architect for the construction of the National Capitol Building, to provide such a plan. Within a very short time, Latrobe obliged by offering his drawings and suggestions for the new college building, free of charge.

The name West College would not be applied to Dickinson's oldest standing structure until after the construction of East College in 1836. A small fire inadvertently started by two students threatened the building in May 1823, but disaster on this occasion was averted. Twenty years later, another potential disaster occurred. On November 26, 1844, a fire started in the eastern end of West College, but a bucket brigade of students and citizens, led by Professor Thomas Emory Sudler, was able to extinguish the blaze.

In its first hundred years of use, West College underwent many changes. A window on the eastern end of the main floor was refitted as a doorway under President John Durbin. The western end of the building had served as a faculty residence for decades, with grounds west of the building serving as a garden, but this accommodation ended in 1890. With the building of Bosler Hall, which included a chapel, the upper gallery was removed from the main hall in West College. As fraternity housing absorbed many of the students in the early part of the twentieth century, Old West began to be used more exclusively for classes and office space. Under President George Reed, the buckling Old Stone Steps were reset, and with the reconstruction of Denny Hall in 1905, the college bell was moved from the cupola of Old West to Allison Tower.