On June 5, 1862 the Battle of Tranter's Creek, in Pitt County, North Carolina, was fought as part of Union Maj. Gen. Ambrose E. Burnside's North Carolina expedition during the American Civil War. The 24th Massachusetts, under Lt. Col. F.A. Osborne advanced from Washington, to the bridge over Tranter’s Creek, where it encountered the 44th North Carolina, under Col. George Singletary. This Union victory was a continuation of Gen. Winfield Scott's "Anaconda Plan." There were 40 casualties as well as the death of Colonel George Badger Singletary in this battle. 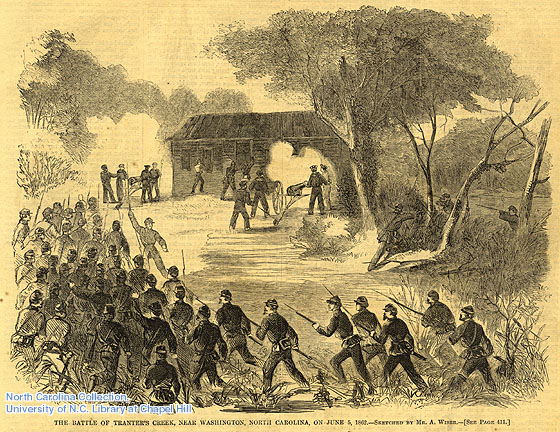 The gravesite of Lt. William B. Avery (September 10, 1840 - July 19, 1894). Lieutenant Avery was awarded the Medal of Honor for his valor at the Battle of Tranter's Creek 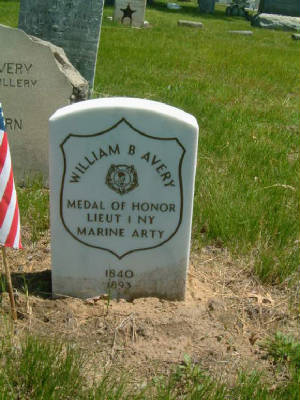 Tranter's Creek marker is located in Beaufort County, North Carolina and was installed in December 2007. It is located on the south side of U.S. Highway 264, about eight miles west of Washington and about one mile south of the battle site. 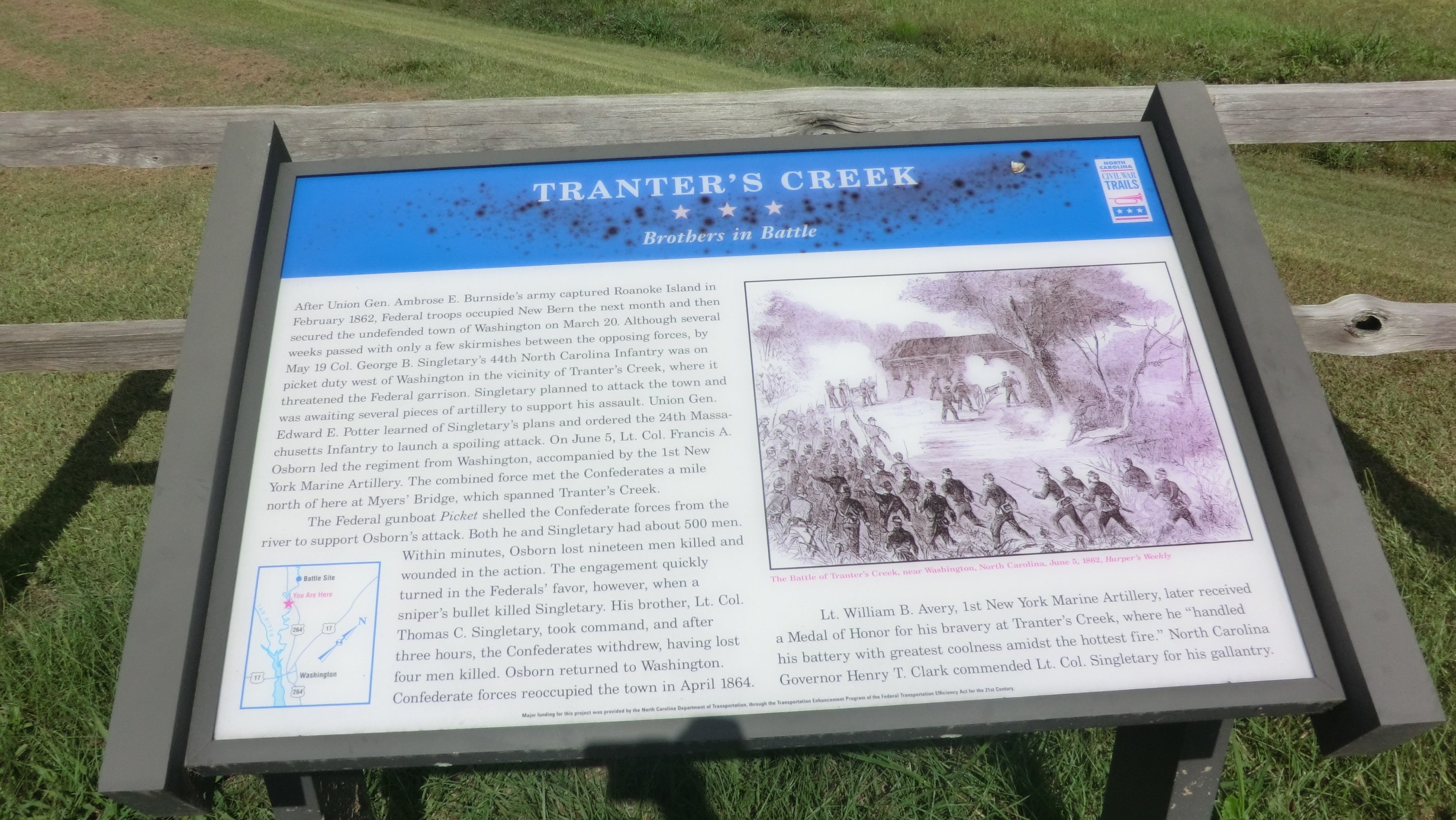 In May of 1862, Col. George B. Singletary's 44th North Carolina Infantry was settled west of the town of Washington, NC, near Tranter's Creek. They were awaiting the delivery of additional artillery to aid in an assault  on the town of Washington. When Union Col.Edward Potter learned of this plan he ordered Lt. Col. Francis A. Osborn  to attack the Confederates in order to protect this town. On June 5th, Osborn and his regiment met up with the 1st New York Marine Artillery who were stationed with their boats on the river. These two forces met Singletary's troops at Myers' Bridge which crossed Tranter's Creek. Unable to cross the bridge due to the opposition, Osborn turned his attack on the mill buildings in which the Confederates were barricaded. This attack was supported by the gunboat Pickett as it shelled the Confederates from the river. Within a few short minutes, nineteen of Osborn's men had been injured or killed. However, a sniper's bullet killed Col. Singletary which turned the advantage towards the Union. Singletary's brother, Lt. Col. Thomas C. Singletary  took command but after three hours and more casualties, the Confederates withdrew. Osborn and his troops returned to Washington and the Union declared victory in this battle. The included audio link summarizes the battle.

Lt. William B. Avery of the 1st New York Marine Artillery, received a Medal of Honor for his bravery at Tranter's Creek. It was said that he he “handled his battery with greatest coolness amidst the hottest fire.”

Other battles of Burnside's North Carolina Expedition include:

The following appeared in the Harper's Weekly newspaper on June 28, 1862

"The enemy it seems had been gathering in some force in the neighborhood of Washington, North Carolina, and after awaiting an attack for some time, our officers determined to assume the offensive. The Herald correspondent thus tells the story:

On Thursday morning, June 5, a reconnoissance in force started from here (Washington) under command of Lieutenant-Colonel Osborn, commanding the Twenty-fourth Massachusetts regiment, accompanied by Colonel Potter of the First North Carolina Union Volunteers, and Lieutenants Strong and Pendleton, the two latter officers acting as aids. The expedition consisted of the Twenty-fourth Massachusetts regiment, Company I of the Third New York cavalry, under command of Captain Jocknick and Lieutenant Allis, and a detachment from Colonel Howard's Marine Artillery, under command of Lieutenant Avery.

The infantry and artillery, having taken up the line of march, formed a junction with the cavalry on the outskirts of the town, when all advanced along the Greenville road, while the gun-boat Picket, Captain Nichols, proceeded up Tar River and shelled the woods ahead.

After marching some distance, a sight of the enemy was at length obtained. The same correspondent writes:

Its order to understand the progress of the fight, it may be well to here give a brief description of the vicinity. The road, near where it crosses the bridge, descends through a ravine or gorge, and, turning suddenly to the left, skims along by the edge of the creek, which at this point is more properly a wide pond or swamp, filled with stumps of trees. On the bridge are a saw-mill and cotton gin, whose power is derived from the flowing of the water. The rebels had taken up the boards of the bridge between the two buildings, and with them constructed it breast-work, if it might be so called, near the cotton gin.

The columnn at length got in motion again from the widow's house, and the skirmishers, having descended the ravine, cautiously moved toward the bridge. The advance-guard was from Company A, and under command of Lieutenant Jarvis. Coming from under cover of the trees, they moved up the inclined plane at the foot of the bridge, and suddenly discovered a row of heads behind the breast-work of boards, and the guns all leveled toward them. Sergeant Shepard and a companion fired, and a heavy volley came in return. Lieutenant Jarvis fell at the first fire. The rest of the advance returned the volley, and then fell back on the main body. Colonel Osborn immediately ordered forward the artillery, and in less time than it takes to narrate it the gallant marines, under Lieutenant Avery, came dashing down the hill with their guns, which they stationed, one bearing on the enemy's front through the arch of the saw-mill, the other to the left of the bridge, and raking the enemy on their right flank. The main body of the infantry also came forward on the double-quick, while Captain Jocknick formed his cavalry on the brow of the hill, ready to charge the enemy at the decisive moment, though, as it afterward happened, no opportunity was afforded to his men to strike a blow, owing to the nature of the affair. On account of the narrowness of the road, only three companies of the infantry could be brought into action at once, and the rest were disposed of in the rear, where they were ordered to lie down. With one company in the road, and one on either side, the engagement regularly opened on our side. Lieutenant Avery discharged several rounds of shell and canister at the enemy's position; for they were so concealed in the bridge and behind the trees as to be completely out of sight. The infantry poured a terrific fire across and on either side of the bridge, the riddled beams and posts of which soon gave token of the showers of balls which were passing and re-passing. A number of rebels had secreted themselves in the left of the cotton gin, and were firing very briskly when driven out by a shell which Lieutenant Avery lodged in the building. Others again were discovered ensconced in the tree-tops on the opposite side of the creek. Lieutenant Avery elevated his pieces, and fired a couple of rounds of canister through the branches, whereupon several bodies were seen to fall to the ground, at sight of which our boys burst into a prolonged cheer or yell. The steady firing of the artillery and the volleys from the Twenty-fourth at length drove the rebels from the bridge, and, falling back, they kept up a desultory fire from the trees and the edge of the creek. At length the word was given to charge. The artillery fired a round to clear the way, and, under cover of the smoke and the effects of the canister, our boys with fixed bayonets dashed upon the bridge, and, headed by Colonel Potter, advanced on a run to the point where the boards had been taken up. Replacing them as best they could, they passed over, and found themselves undisputed occupants of the field; for the rebels had fled down the creek and through the woods, leaving behind them three of their dead and a large quantity of muskets, shot-guns, swords, sabres, and other weapons. Their rout was thorough and complete. The ground was covered with pools of blood, showing that their loss was pretty heavy, though it is impossible to ascertain the exact figures, as they carried off all their dead and wounded except the three bodies above referred to, which they could not rescue owing to the heavy fire of our artillery on the spot where they were lying. At the opposite side of the bridge the rebels had thrown up a temporary breast-work of cotton bales in an angular shape, with the corner nearest the approach from the bridge; but it failed to serve them as a means of defense.

Our loss on the battle-field was four killed and twelve wounded; but three of the latter died soon after the fight, so that our loss now stands seven killed and nine wounded."1