This historic marker commemorates the victims of a storm that caused the sinking of the S.S. Inchulva on September 11, 1903. Nineteen crew members were able to reach the shore by using parts f the wrecked ship as a makeshift raft. The remaining nine seamen lost their lives.

Historic Palm Beach County Preservation Board created and erected this historic marker in 1980. 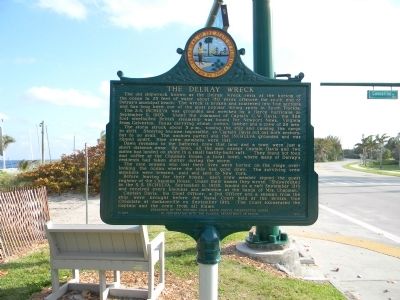 The old shipwreck known as the Delray Wreck rests at the bottom of the ocean in 25 feet of water about 150 yards offshore the south end of Delray’s municipal beach. The wreck is broken and scattered into five sections and has long been one of the most popular diving spots in South Florida.

The S.S. INCHULVA was grounded and wrecked by a fierce hurricane on September 11, 1903. Under the command of Captain G.W. Davis, the 386 foot steel hulled British steamship was bound for Newport News, Virginia from Galveston, Texas carrying wheat, cotton, lumber and a crew of 28 men.

The storm struck about 5 p.m., tossing the ship and causing the cargo to shift. Steering became impossible, so Captain Davis put out both anchors, but to no avail. The anchors parted and the INCHULVA grounded and was ripped apart. Nine crew members were lost.

Dawn revealed to the battered crew that land and a town were just a short distance away. By noon, all the men except Captain Davis and two mates had landed on shore in a small hastily-built raft. They found hot food and coffee at the Chapman House, a local hotel, where many of Delray’s residents had taken shelter during the storm.

The nine seamen who lost their lives were buried on the ridge overlooking the ocean where the ship had gone down. The surviving crew members were treated, paid and sent

Before leaving for their homes, each crew member signed the guest register of the Chapman House. Under their names they wrote, “Shipwrecked in the S.S. INCHULVA, September 11, 1903, landed on a raft September 12th and received every kindness and attention at the hands of Mrs. Chapman.”

Captain Davis, his Chief Officer, a 2nd Officer and a seaman from the ship were brought before the Naval Court held at the British Vice Consulate at Jacksonville on September 19th. The Court exonerated the Captain and the crew from all blame.