Nestled in the Great Smoky Mountains of Tennessee lies the little town of Gatlinburg, and even in this densely secluded area in the mountains the effects of the Civil War would be felt. During the Civil War, the Gatlinburg area was occupied with Confederate forces who were under the command of Major William Thomas. His forces were made up of Indians and white men who called themselves the Thomas Legion. This area was vital for the mining of the natural resource saltpeter, which was needed to make gunpowder as well as other goods, and it would be here in Gatlinburg that men from both the North and South would meet. The call was made for the Union troops to get the Confederates out of the town so that Union troops could maintain constant control of the saltpeter mines. In December of 1863, Union Colonial's William Palmer and C.D. Lamborn's troops converged in Gatlinburg and ultimately forced the Confederates to flee after a short battle on Burg Hill (present day Gatlinburg). This battle would claim no lives, something that is ironic when it comes to fighting a war. 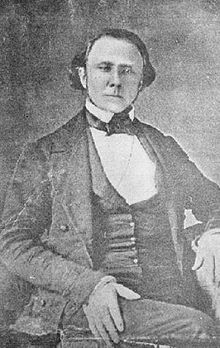 Battle of the Burg reenactment 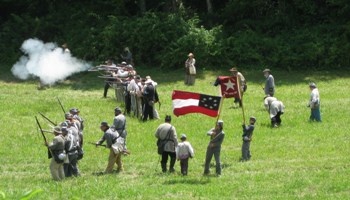 The Battle of the Burg as it was called was a small battle during the Civil War between Union and Confederate forces in Gatlinburg, Tennessee. Most citizens that lived within this area wished to remain neutral, but as the fates would have it this area would not be able to stay out of the conflict indefinitely. The battleground is in present day Gatlinburg, Tennessee, and every year a reenactment of this battle is performed for the public. During the Civil War, this area was occupied by Confederate forces and it was an area that was rich in saltpeter and the mining of this resource was of high importance to all. What made saltpeter so important was that this natural resource was used to make gunpowder and Epsom salts, which was vital to both the Union and Confederate forces. Both sides could gain if they controlled this mining area. The people who lived in the town were providing the food and other goods for the troops of Major William Thomas. His regiment included Indians, guerrillas, and, of course, white men and they had been promised by Thomas that they would not actually fight in a battle but would instead be helping to build a road to access the mines and be involved in the mining of the precious saltpeter that they depended on for their cause. Alum Cave was the location where the saltpeter was mined and it was here that Colonel William Thomas and his troops were settled in order to protect its invaluable resources. During the battle itself, the Union troops intended on gaining access to the cave for its resources and hoped that it would weaken resistance.

The total time the Confederate forces occupied Gatlinburg was about two years. The promise that was made to the local men about serving in battle had now changed and Thomas told them that they were required to fight if the need arose. Of course, this angered the men and many deserted. In December of 1863 two companies were issued with the task of getting the Confederate troops out of Gatlinburg, and this is where the battle of the Burg begins.

Union Colonial William Palmer of the 15th Pennsylvania Cavalry led 150 men from Wear’s Valley, Tennessee and Colonel C.D. Lamborn led 50 men from Sevierville, Tennessee and these two forces met in Gatlinburg where they would begin their task of ridding the city of the Confederate forces. December 20, 1863 was the morning that the Union and Confederate forces would come face to face at the block house that was built by major William Thomas on Burg Hill. After a small fight the Confederate forces realized they were outnumbered and fled across the Smoky Mountains. No casualties were reported during this battle, although a few were wounded and one Union soldier was taken captive during the altercation.