Garnet, Montana: Once a booming town full of miners and their families, now an uninhabited plot of land with a couple dozen empty cabins and stores.Garnet is named after the Garnet Mountains that provided the miners who lived there with plenty of gold ore to sell and use to provide for their families in their mining town. Garnet was at one point a very prosperous town between 1895-1911, but began to plummet as gold production went down and also after a large fire swept through the town, destroying many homes and markets. By 1950, not a soul was left living in the desolate town. It wasn't until 1970 that the Bureau of Land Management decided to restore the town to its former condition so that tourists could take a look into the past and see what the mining-based town of Garnet was like before it became a ghost town. 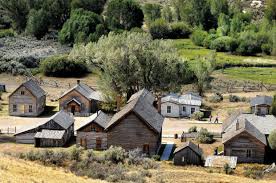 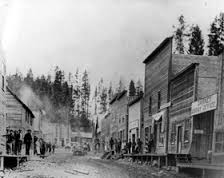 Inside of a home in Garnet Ghost Town 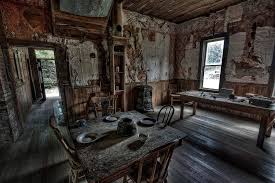 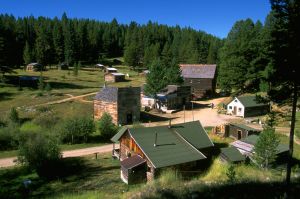 Mining was and still is to this day a very important way to get natural resources. While there are still many mines throughout North America that are still in use, during the 19th and 20th centuries mining was at its peak. It wasn't until the late 1860s that prospectors began to realize that there were rich supplies of gold ore that could be mined out of the Garnet Range, but the terrain was so steep and uneasy to travel by that many of the miners decided against excavation. In 1873 a man by the name of Samuel Ritchie decided to begin mining part of the range by himself, often sending the gold ore he dug up back town the mountain on his mule to sort and sell. Other miners began to catch on, and soon a small camp formed near the mine, and Ritchie became the "founder" of the town that had began to form.
When the Sherman Act of 1893 was repealed, silver values plummeted, and miners had to turn to something new and profitable: gold.  The Garnet Range held vast quantities of gold and now that people had began to mine there, even more miners started to show up and stake claims. The small mining camp began to grow in a matter of days as miners and their families moved to the area. In 1894, a doctor named Armistead Mitchell decided to build a mill so the ores dug up didn't have to be sent so far off to be sorted, and by that time a town had formed. The town first called itself Mitchell, after the doctor who gave them the mill that helped the miners out immensely, but later was renamed Garnet, after the mountain range that provided miners with ore. By 1989, the town had a post office, a school, multiple markets, a hotel, saloons, and over 1000 people living in it. Sadly, by the the begging of the 1900s, mines started to close as production diminished. To make matters worse, a large fire nearly wiped out the town in 1912. Population slowly diminished until the town was finally deserted completely in 1950.
Garnet continued to deteriorate until the BLM (Bureau of Land Management) got together with the members of the Montana Historical Society and began to make plans to save the historical ghost town. Since many of the buildings in Garnet were built quite quickly to keep up with all of the people flowing into the town, their foundations were not very stable, so the BLM set out to secure the buildings and fix any of them that were falling apart. To this day, the BLM still watches over Garnet, while the Garnet Preservation Society operates the volunteer guide services in the town. There are about 24 buildings that remain in Garnet, and all of them can be explored by tourists either with help from a guide or by themselves. The fee to enter the village is $3, and free for children under 16, and if you have furry children, they are allowed too as long as they are on leashes. The town is easy to drive to between May and November, but during winter months the town can only be accessed by skiing there or by snowmobiling there along the trails, and since the winter trip is a bit difficult, anyone that makes it there during those months doesn't have to pay the fee. Garnet is truly a town worth visiting, and visitors can expect to gain new-found knowledge of how early mining towns worked and came to be.

Garnet is open year-round, however access is limited in the winter. Wheeled vehicles are allowed on the road from May 1 through January 1, depending on snow conditions. In winter, Garnet is only accessible by snowmobile and cross-country ski trip.