The monument prior to the addition of a security screening area. 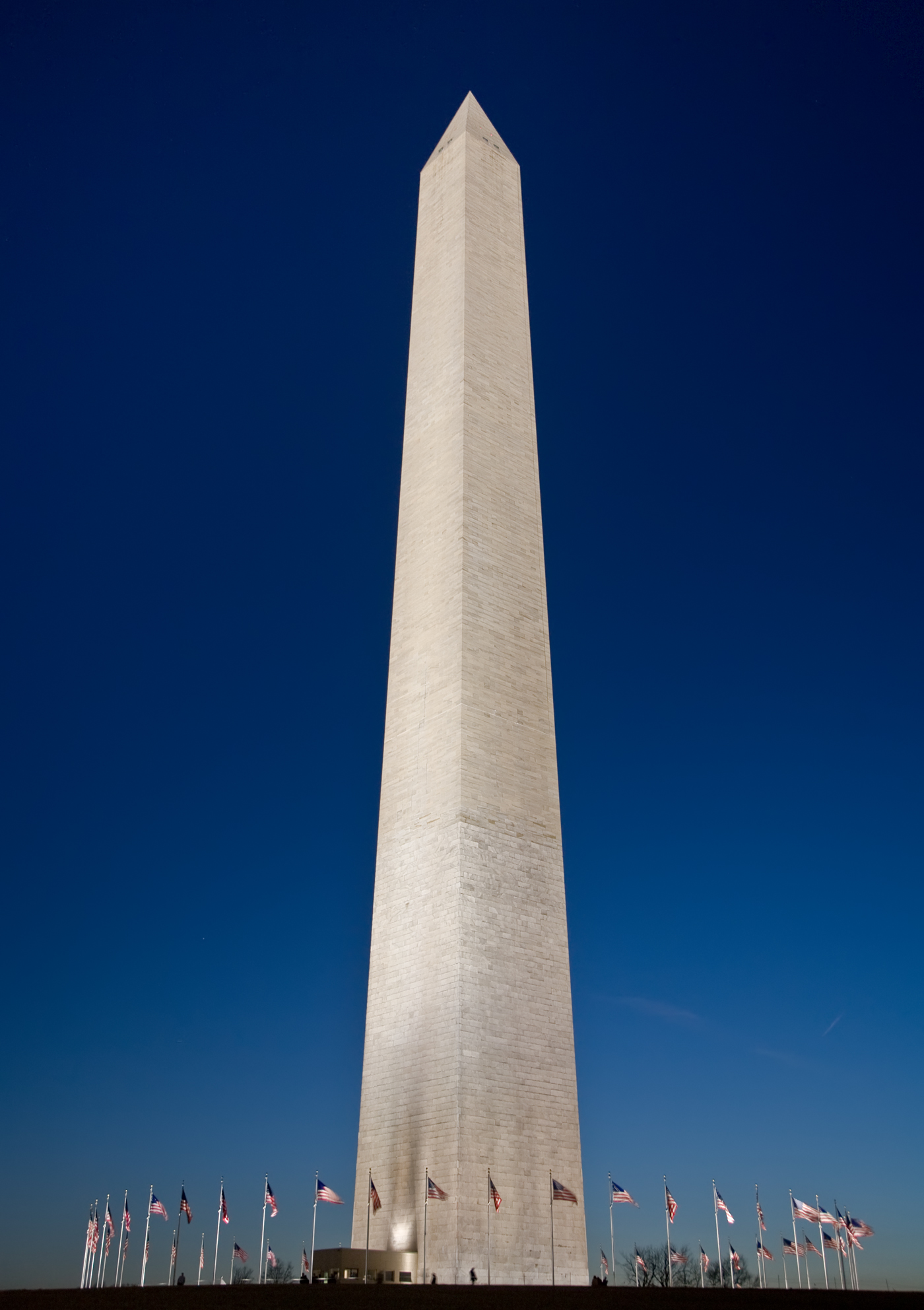 The unfinished Washington Monument in 1860. Photo taken by Mathew Brady. 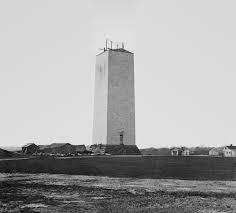 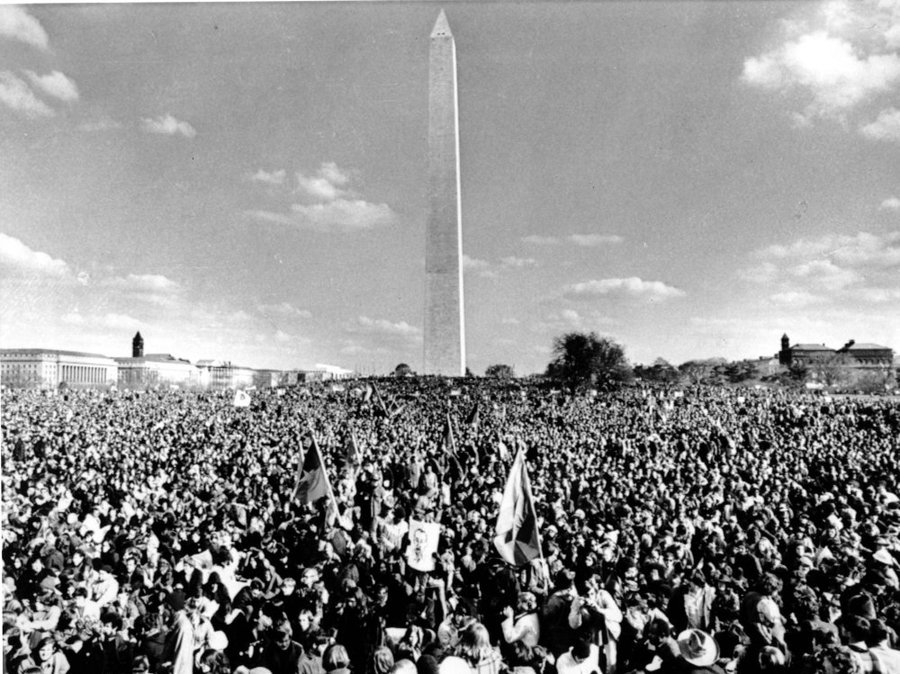 Ron Chernow, Washington: A Life-Click the link below to learn more about this Pulitzer-prize wining biography 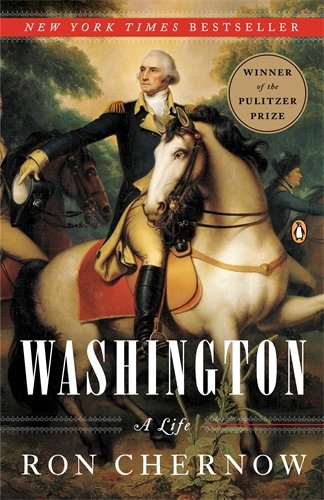 Visitors examine the City of Washington's memorial stone in the Washington Monument. Photo circa 1922, courtesy of the Library of Congress. 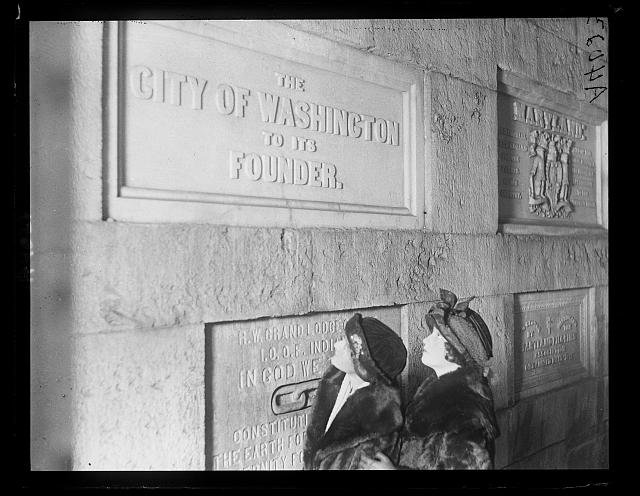 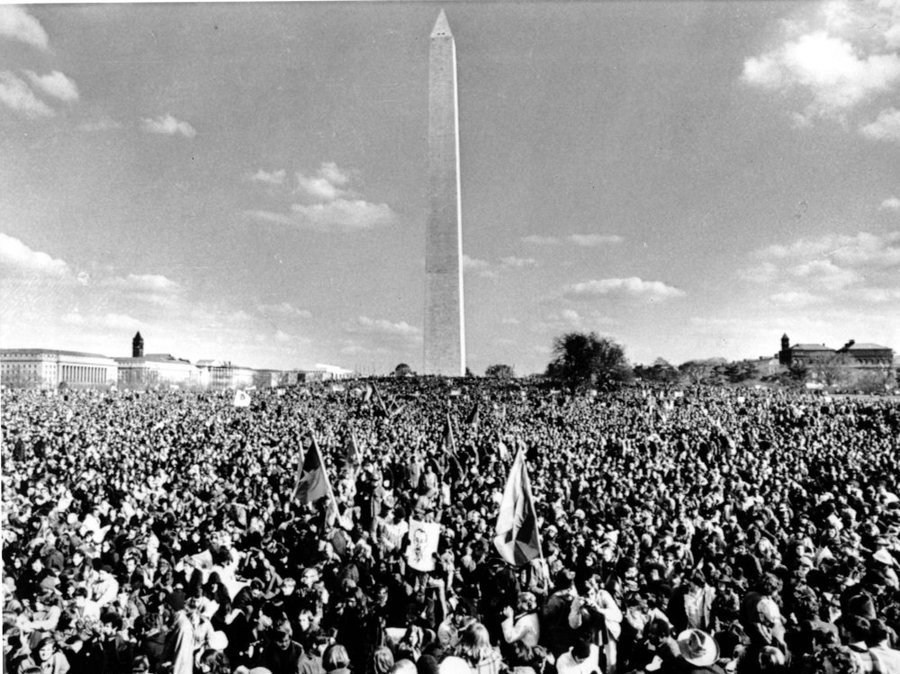 The Washington Monument undergoing restorations in the 1930s. Photo courtesy of the National Park Service. 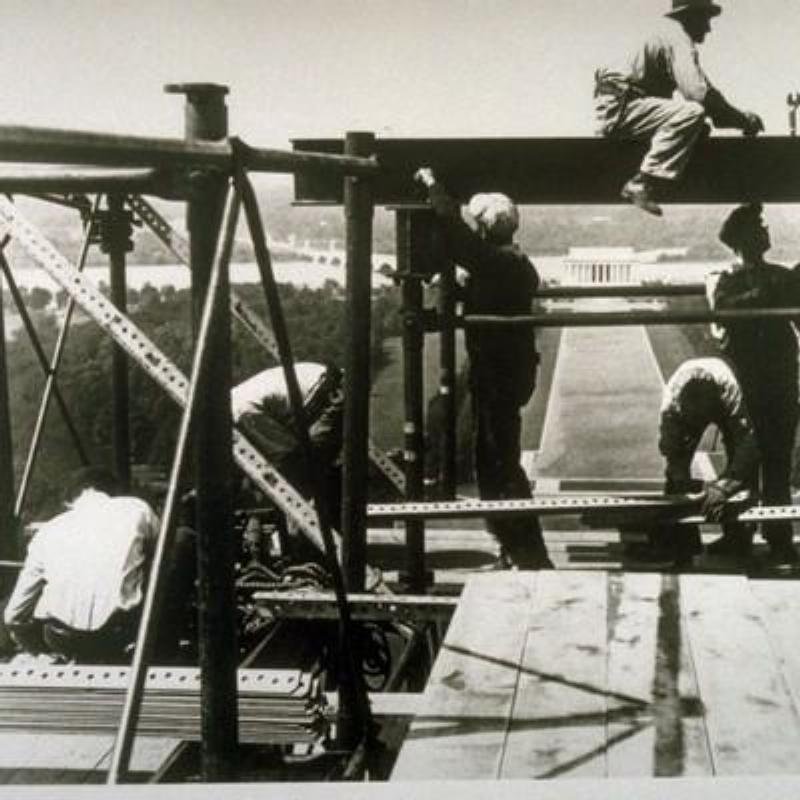 Contractors assess damage to the Washington Monument after the August 23, 2011 earthquake. Photo courtesy of the National Park Service. 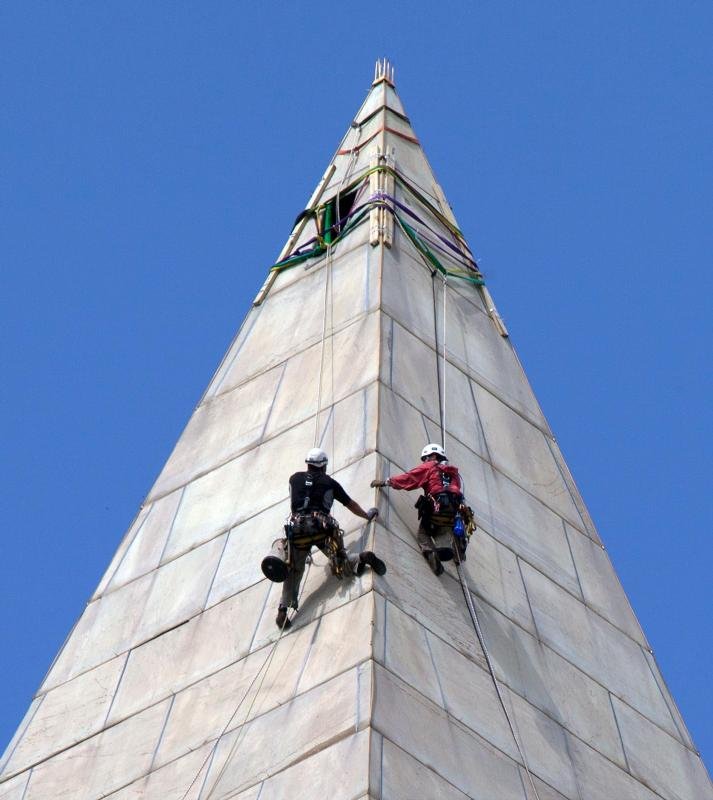 Ron Chernow, Washington: A Life. Click the link below to learn more about this Pulitzer Prize winning biography 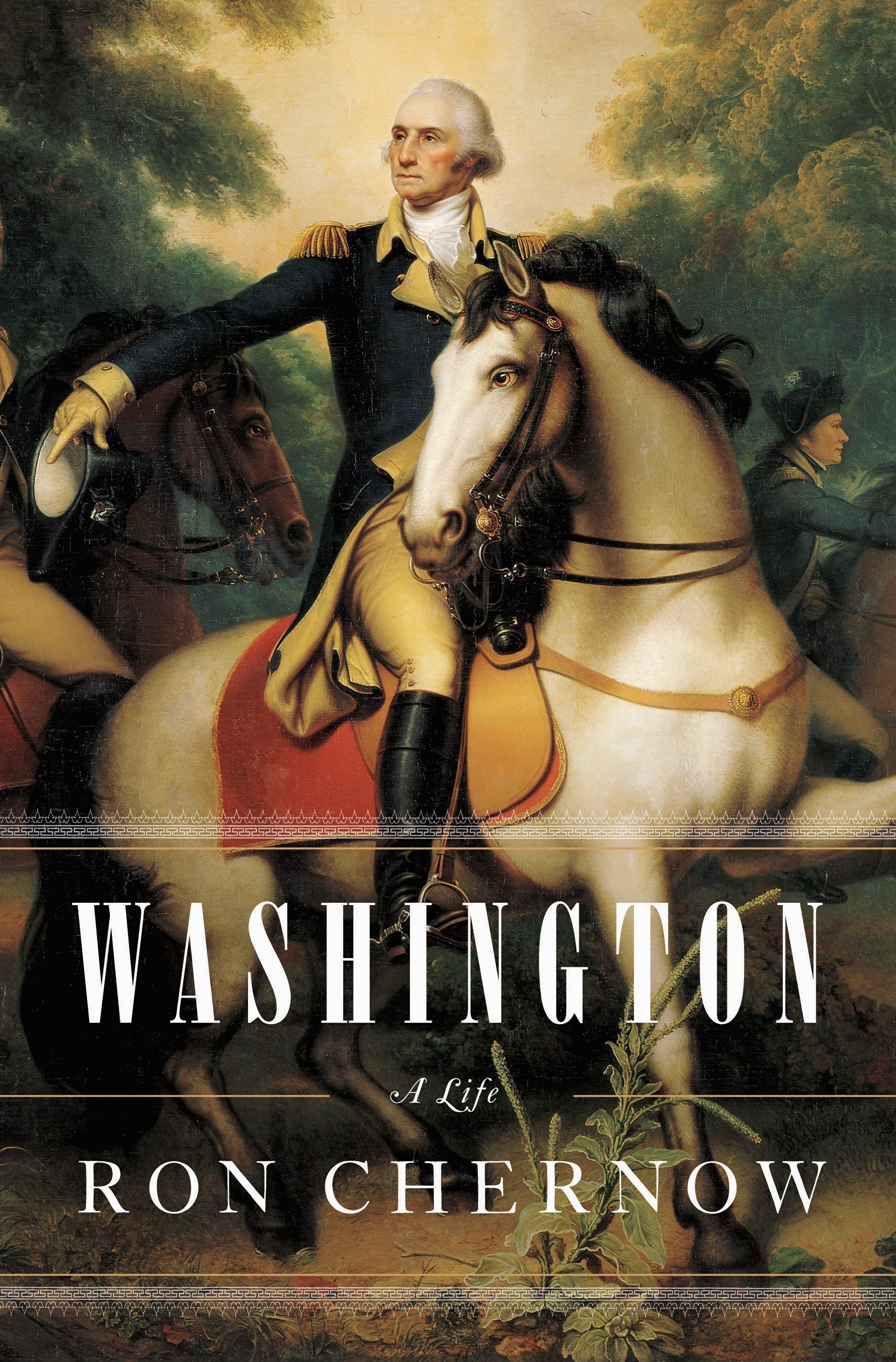 Following his leadership as the commander of the nation's military forces in the Revolutionary War, and his leadership of the Constitutional Convention, Washington received the unanimous support of the first Electoral College and became the first American President. In this role, Washington shaped the Presidency and established many of the expectations for future presidents.

The Washington National Monument Society (WNMS), who proposed the idea, wanted this monument to be unlike any other in the world; so, after sifting through several designs, it was decided that Robert Mills’ would be appropriate for the monument. Mills’ plan was to build a 600-foot Egyptian obelisk flanked by thirty 100 foot columnns. The memorial would stand at the intersection south from the White House and west of the Capitol.

The cornerstone for the project was laid on July 4th, 1848 and many notable guests were in attendance, including President Polk and the wives of James Madison and Alexander Hamilton. Workers toiled over the foundation of the monument, an 80 foot square-step pyramid structure. Once this task was completed, the builders turned their attention to building the above ground marble structure. They used a system of pulleys, a block and tackle system, and a mounted derrick to push stones up, enabling them to push the monument skyward. The WNMS also invited states, cities, and organizations to design memorial stones to help build the monument. They received 193, some of which are now visible through the elevator windows. By 1854, the monument towered at 156 feet above the ground.

A new group within the Know-Nothing Party took control of the WNMS, which proved to be of great detriment to the monument’s progress. This new alignment alienated potential donors and the already struggling Society was force to file for bankruptcy, putting the construction of the monument on hold. Congress tried to offer financial aid, but the nation was struggling because of the outbreak of the Civil War. Only after, would the nation again be able to focus on constructing this national monument. Congress took control of building the monument through a joint resolution on July 5, 1876.

The US Army Corps of Engineers, headed by Lt. Col. Thomas Lincoln Casey, was tasked with completing the massive project. The new leadership decided the base was too brittle, so the first job was to strengthen it by adding more stone, this process lasted four years. Attaining stone to continue building the monument was another issue. The quarry in Baltimore used previously was now unavailable, so the men looked elsewhere in Massachusetts. However, there were constant problems with deliveries and the color of the stone. The builders used many sections of this stone, but again turned to a different quarry in Baltimore that had better quality stone. They used this stone for the rest of the monument. The stones do not match and so the difference in the color of monument is noticeable to the naked eye. The three types of stone used are marble, granite, and blue gneiss. The color changes at about two-thirds up the monument.

Some other plans for the monument were scrapped by the new management. For example, the ornamentation that was supposed to adorn the obelisk was forgotten in favor of a cleaner look. The monument stands at 555 feet instead of 600 feet so that it could be 10 times the width of the base. The walls we made nine inches instead of thirteen.

The memorial was completed and dedicated on February 21, 1885. An iron staircase was added later, and the monument opened to the public in 1886. An electric elevator was added in 1901 to shorten the trip to the top of the obelisk. On the aluminum cap which covers the capstone, there are names and dates of the monument’s construction inscribed as well as the Latin phrase “Laus Deo” meaning “Praise be to God." Beginning in the 1920s, American flags appeared around the monument for celebrations and special occasions. In 1958, flagpoles were permanently installed. Fifty flags, representing each state, have flown continuously since 1971.

The Washington Monument has since become a major tourist attraction and an iconic symbol for the country. It is part of the National Mall and Memorial Parks. Visitors to Washington, D.C. flock to the monument which offers astounding views of the Lincoln Memorial, Reflection Pool, Jefferson Memorial, and the Capitol Building. It has also been the site of many protests and events since its opening. For example, protesters during the Vietnam War and Korean War came to the monument to demonstrate against US involvement in those conflicts.

The Washington Monument has undergone numerous restorations to clean, repair, and stabilize this important historic icon. Most of these repairs have been general upkeep. On August 23, 2011, A 5.8 magnitude earthquake struck 90 miles southwest of Washington, D.C., causing damage to the Washington Monument walls and stability. The National Park Service gathered teams of engineers and architects to repair the structure using a blend of high-tech science and centuries-old masonry techniques. It is currently closed until 2019 to renovate the elevator.