Old Baldy, built in 1817 is North Carolina’s oldest standing lighthouse. It has marked the mouth of the Cape Fear River for almost 200 years. Over the years, different people patched the stucco that had begun to fall off of the lighthouse. Today, Old Baldy resembles a patch work quilt, with its different colors of stucco. A 1850s replica of the lighthouse keeper’s cottage houses the Smith Island Museum of History.

Old Badly was built in 1817 to to mark the entrance of the Cape Fear River for maritime sailors. 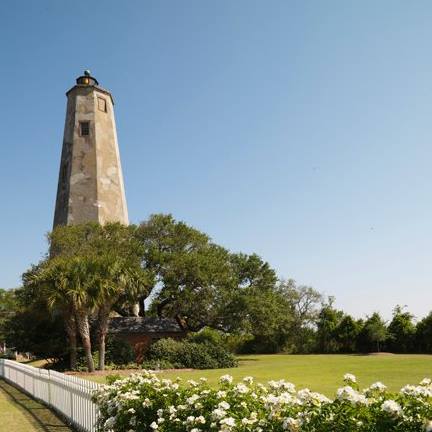 For over 187 years, Old Baldy has maintained its original form and location making it the oldest standing lighthouse in the state of North Carolina.  Built in 1817, Old Baldy was constructed to mark the entrance for maritime sailors at the Cape Fear River.  It was built with soft red bricks that were covered with stucco. After Old Baldy was finished, every two years the lighthouse keeper would whitewash it. This helped to protect the stucco. When the lighthouse was no longer whitewashed, pieces of the stucco began to fall off.  From time to time, someone passing by would stop and patch the missing pieces with new stucco.  Old Baldy went from all white in 1817, to looking like a patch work of different stucco colored today.

Since its beginning, the light in Old Baldy has changed.  At the beginning, had an original fixed light that was powered by 15 lamps. A new lighting device was installed in 1834 which flashed red with a 30-second delay. The light was temporarily darkened during the Civil War and was not relit until 1879. The once red flashing light was changed to white in 1893 and new lamps were installed. When the Cape Fear Lighthouse Station became activated, Old Baldy because the fourth order fixed light in 1903.  The government allowed Old Baldy to operate as an active light station until 1935.  They also used the lighthouse as a radio beacon during World War II.  Although it no longer serves as an official navigational aid, the historic light was relit in 1988.

Be sure to visit the Keeper’s Cottage (the Smith Island Museum of History). Here in this authentic recreation of an 1850’s house visitors can learn about lighthouse keepers, pirates and surf men. Visitors can also take some time to learn about maritime history on the island, see how a Lyle gun was used and read the lighthouse keeper’s journal. Once visitors have climb the 108 steps, 5 landings and a ship ladder into the lanthorn room, they will have the best view of the island.  The oil house may also be visited. It was built to house the kerosene oiled used to fuel the beacon light on the top of Old Baldy.  It was converted into a radio station for the U.S. Coast Guard during World War II.