On this site, July 21, 1879, two LDS (Mormon) missionaries, Joseph Standing and Rudger Clawson, were ambushed while on their way to Rome, Georgia, by an anti-Mormon mob and taken to the woods. After being accosted for some time, they were about to be taken by the mob to an undisclosed location. Joseph Standing picked up a pistol left on the ground by a mob member and was then shot in the head. Threatened with death, Clawson was able to persuade the mob to allow him to take Standing's body home in Utah. Today on the site of Standing's murder is a memorial park with a monument to Standing. The park is run by The Church of Jesus Christ of Latter-day Saints.

Joseph Standing before heading to the Southern States Mission 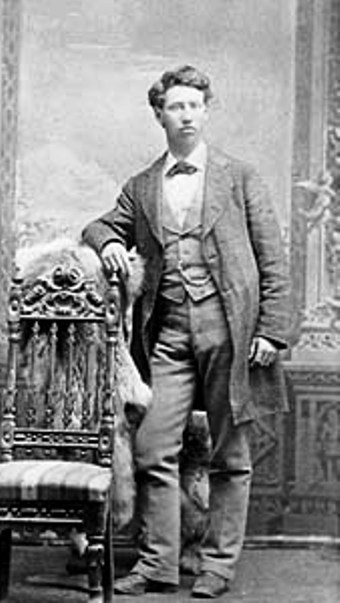 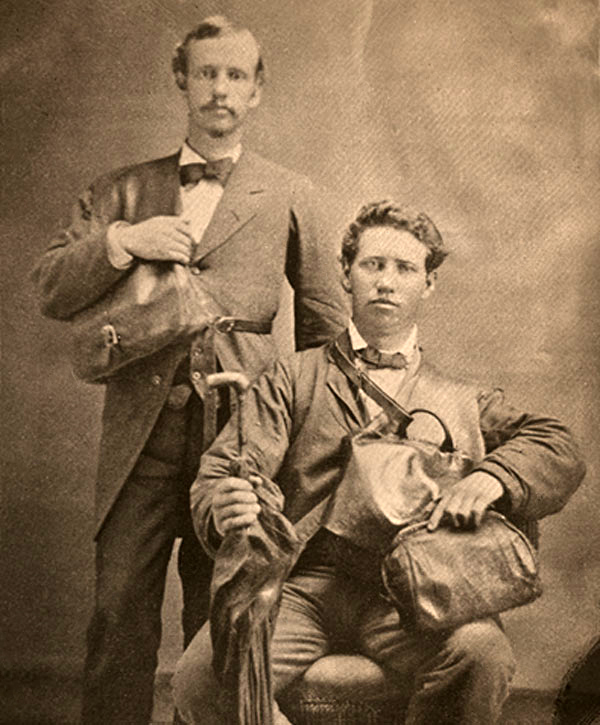 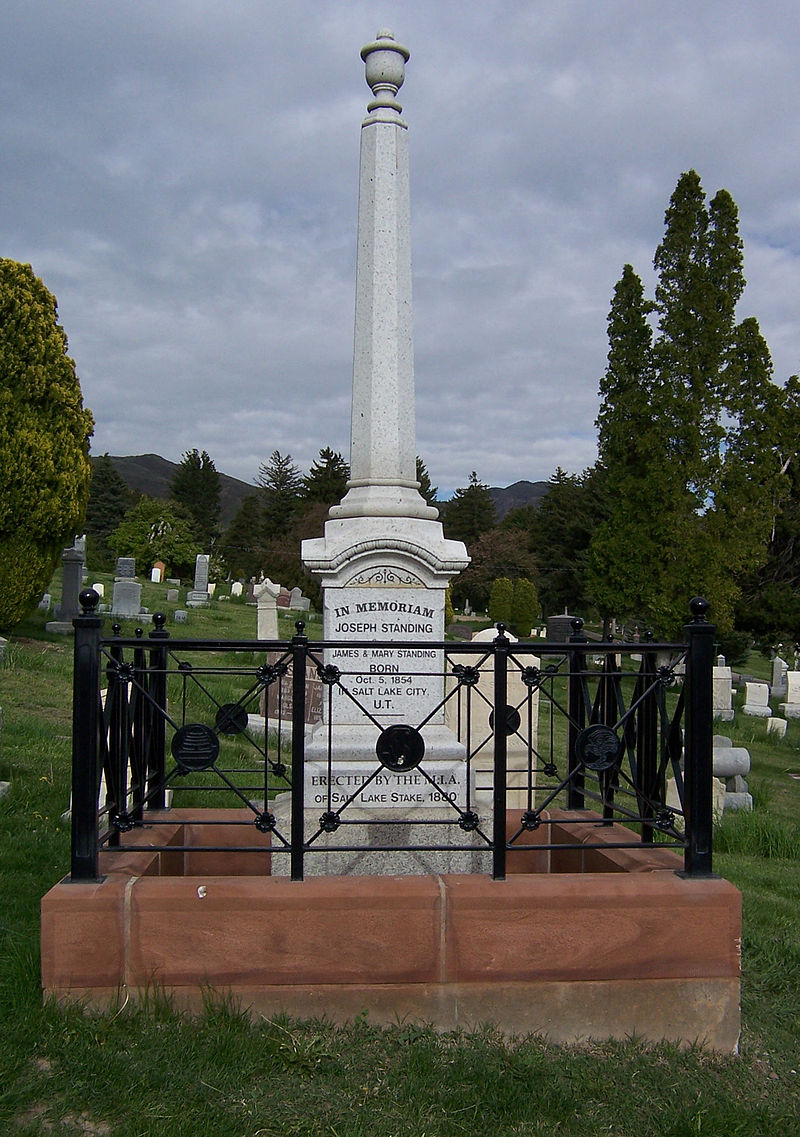 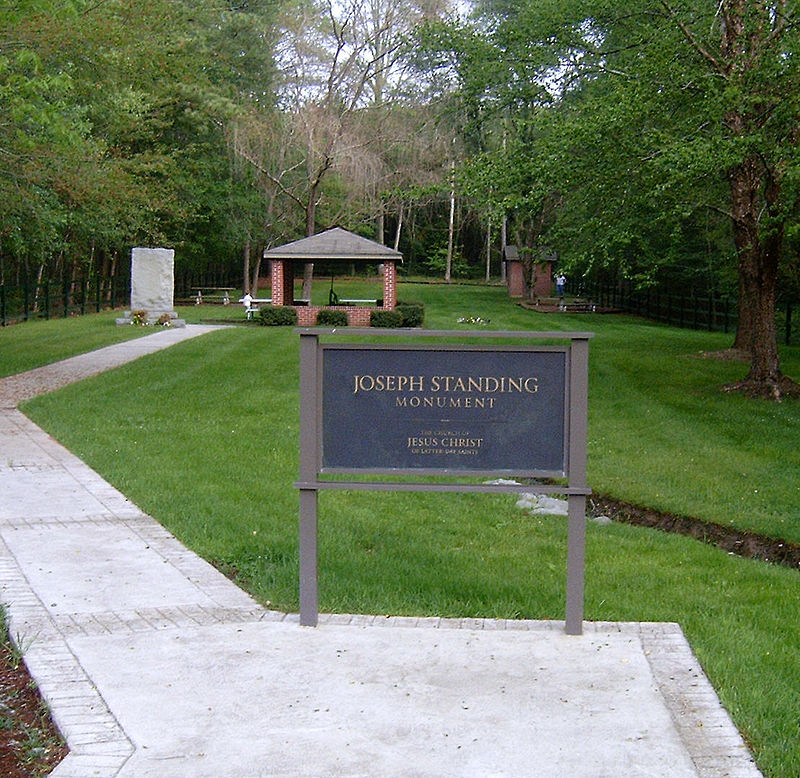 Monument where Standing was murdered 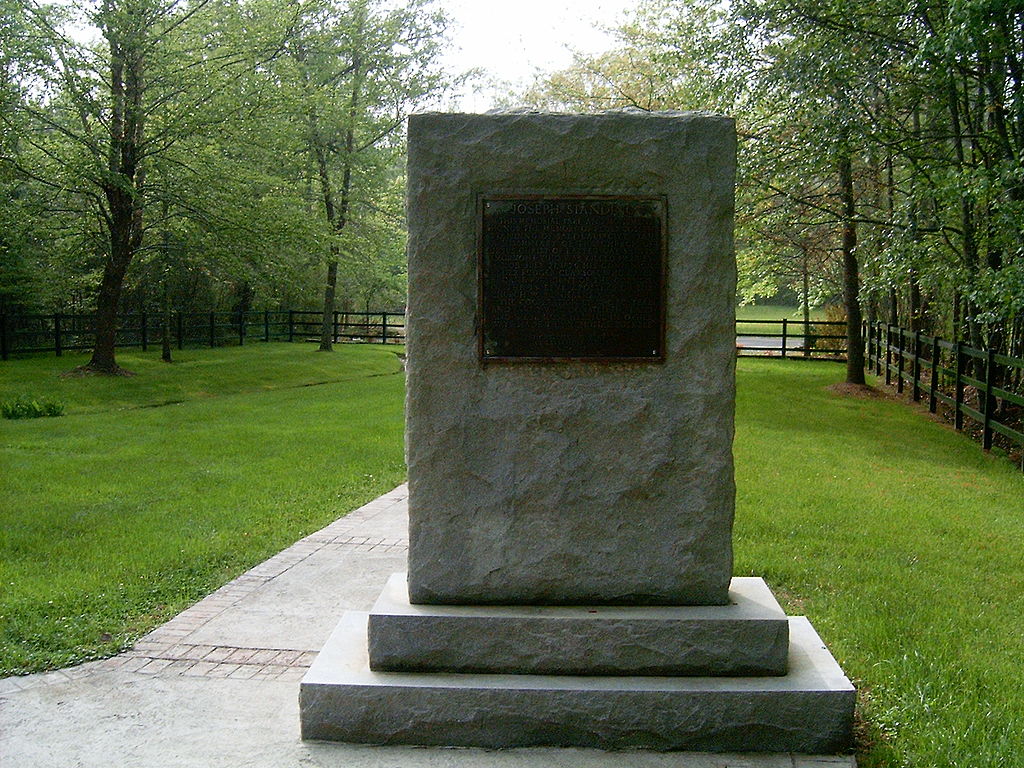 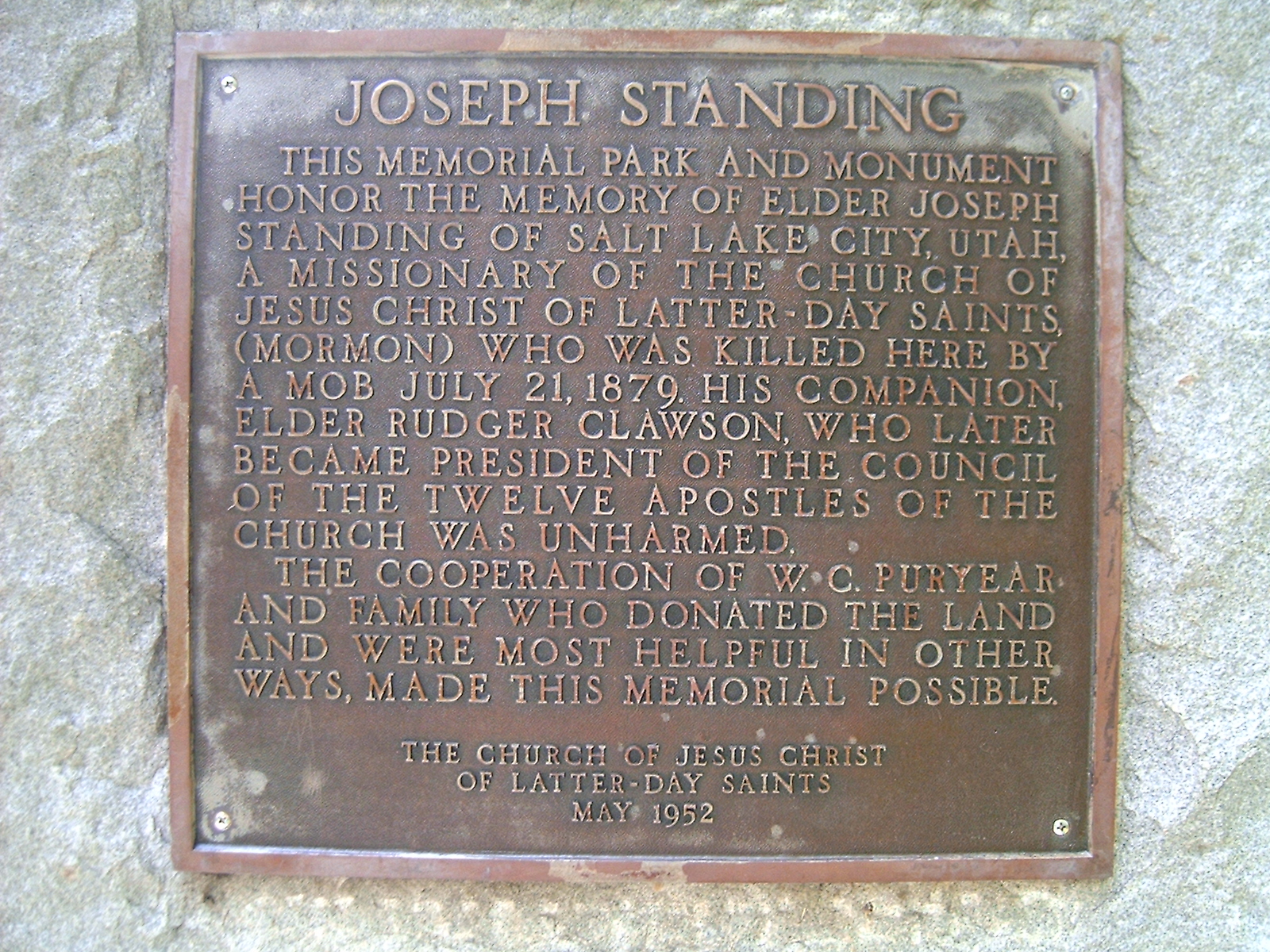 Joseph Standing was one of ten children born to British immigrants in October 5, 1854. Born in Salt Lake City, but growing up in northern Utah territory, Standing's father was a stonemason for the Nauvoo, Illinois and Logan, Utah temples. Prior to being called as a missionary for the LDS church, Joseph Standing was a fireman.

Standing's first mission call was to the then-called Eastern States Mission, where he mostly served in Illinois and Indiana from 1875-1877 and then called to a second mission in 1878 to the Southern States Mission, where he mainly served in Tennessee and Georgia. That same year, he was assigned to preside over church affairs over the state of Georgia before being joined by Rudger Clawson. At that time and during Reconstruction, the LDS church and their missionaries were seen as "spiritual carpetbaggers" whose purpose was to prey on and deceive the poor and uneducated poor folk of the South and anti-Mormon feelings ran high. Despite the opposition, Standing, Clawson and others saw great success among rural Georgians who later gathered with the church in Utah and Colorado.

Joseph Standing wrote a letter to to Georgia Gov. Alfred Colquitt in June of 1879 informing the governor of the interference to worship by mobs and death threats to members of the church. Standing asked for protection by the law and for more involvement by the state to protect the freedom of religion of the members. Colquitt replied expressing understanding and sympathy but refused any help due to no physical acts being done by anti-Mormon mobs.

In July 1879 Standing and Clawson were leaving the town of Vernall to head to Rome, Georgia. While on the road, approximately a dozen armed men on both foot and horseback accosted the two missionaries. The mob declared to the two missionaries that they were to go no further. When Standing asked with what authority the mob could stop them the mob answered with: "The government of the United States is against you, and there is no law in Georgia for Mormons."1 The mob then led the men into the woods up to a spring and informed the two missionaries that they had every intention to kill them, preferably by hanging. For the next hour, according to Clawson, the mob derided and shouted at the missionaries, pronounced them guilty, and then set to lead them to an unknown location.2

Next, Standing proceeded to pick up a gun dropped by a mob member and yelled for the mob to surrender, only to be shot in head; the mob however tried claiming to Clawson that Standing had shot himself. Clawson told the men to shoot him next, but they decided not to on account he passed out because of anxiety and awoke a moment later. Still, they decided not to shoot him after he regained consciousness; they eventually allowed him to leave, obtain help to remove the body, find a coroner and have the body sent to Utah. While obtaining help, Clawson telegraphed Gov. Colquitt to inform him of the murder, then next contacted the president in charge of the Southern States Mission. Upon returning to the body Clawson found the mob was gone. A crowd had gathered and Clawson discovered that Standing's body now had up to twenty bullet holes in him. Although the Atlanta based paper The Constitution tried claiming the LDS church now held worship services based on revenge, Clawson both denied the claim and believed that the mob action in no way reflected the sentiments of the general public. Returning the body home, funeral services were held in the Salt Lake Tabernacle on August 3rd, with Presiding Apostle John Taylor speaking and over 10,000 in attendance.

Prior to the funeral, back in Georgia, Gov. Colquitt offered $500 for the arrest of the men involved and the men, after being identified, were taken to jail. after three days of trial, all men were acquitted on the basis that the men were declared good Christian men in good standing with their community.

Rudger Clawson would go on to be called as one of the Twelve Apostles of the LDS church, which he held until his death in 1943. The murder of Standing remained with Clawson the rest of his life. This murder also had church members recalling the murders of the founder and prophet of the church, Joseph Smith and his brother Hyrum, in 1844 in Carthage, Illinois. A monument was erected at his grave in Salt Lake and in 1952, LDS President and Prophet dedicated the Joseph Standing Memorial Park, built on the spot of Standing's death. The park is maintained by the church and open to the public. A dormitory in the Missionary Training Center in Provo, Utah was named after Standing.