A life-long soldier of the military, Philip St. George Cooke had a distinguished career during the Black Hawk War, Mexican War, Bleeding Kansas, the Civil War and the Apache War. Noted for his authorship of the Army cavalry manuel, he is often refereed to as the "Father of the U.S. Calvary". In a twist of fate, he would find his son-in-law, J.E.B. Stuart opposing him during the Civil War. As one of the many commanders of the famed Mormon Battalion during the Mexican War, his friendship with Brigham Young and Cooke's defense of the LDS church during the "Utah War", it has been theorized that the southern Utah city of St. George was named in his honor. 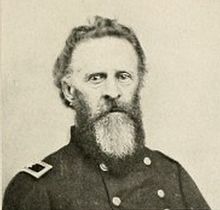 undated photo of Cooke, believed to have been taken around the time of the Mexican War, but most likely a few years before the Civil War broke out 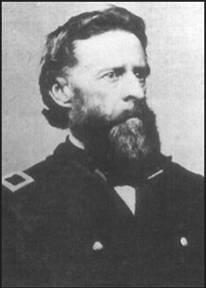 Map depicting the route of the Mormon Battalion 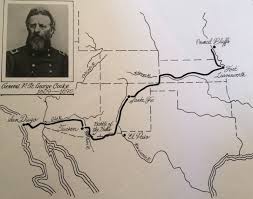 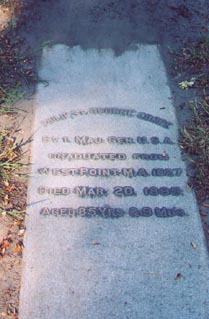 Born in Leesburg, Virginia, June 13, 1809, Cooke graduated from the U.S Military Academy with the rank of brevet 2nd Lieutenant in 1827 and sent to various posts in the West before the Black Hawk War broke out in 1832 in the Illinois and Michigan territories. When the military formally organized the first cavalry unit, also known as Dragoons, Cooke was made 1st Lieutenant in 1833. When war broke out with Mexico in 1846, he was promoted to Lieutenant Colonel and was tasked with commanding the Mormon Battalion from Santa Fe in what is now New Mexico to California (San Diego and Los Angeles areas), thus completing that units historic largest trek in American military history. Soon transferred back to the New Mexico territory after war's end, he he fought a hostile band of Apache then participated in defeating a tribe of Sioux Indians in the 1855 battle of Ash Hollow in modern day Nebraska. When rumors spread that the LDS church (Mormon) in modern day Utah was uprising against the federal government, he was with the elements that headed West. However, he became friends with the church's President and Prophet and defended the church. He stayed in Utah from 1857 to 1861 and even donated wagons and equipment to the Mormon settlers in southern Utah. When the Civil War broke out, Cooke would find one of his children joining the Army of Northern Virginia and a son-in-law, the now legendary J.E.B. Stuart commanding Confederate cavalry forces attached to the Army of Northern Virginia. While it is not largely known what happened to his relationship with his son, Cooke never corresponded again with Stuart.

Cooke's career grew during the Civil War. Made a Brigadier General November of 1861, he was initially assigned with the cavalry elements defending Washington D.C. He first experience in the Civil War was to be in reserve during the Peninsula Campaign in Virginia (March-July 1862), participating in the battles of Yorktown and Williamsburg. As Union forces were repulsed back to the sea, in what became the Seven Days battle toward the end of the Peninsula Campaign, Cooke saw action in the battle of Gaine's Mill and White Oak Swamp. However at Gaine's Mill he was led to more or less sacrifice an entire regiment of regular infantry to delay the Confederate advances. His battle command ended there, by choice, but also by the embarrassment of having his son-in-law, Stuart, beating the U.S. cavalry units attached the Army of the Potomac. Cooke was transferred to Union-occupied Baton Rouge in Louisiana, where he was in charge of recruitment and court-martial boards. He stayed there until the end of the war and in 1866 was made Major General.

From 1866 to 1873, he was in charge of different military departments: Department of the Platte (containing all of Iowa, Nebraska, Wyoming and Utah and portions of Idaho), Department of the Cumberland (essentially areas of Tennessee, Ohio, Kentucky and Georgia) and the Department of the Lakes (containing portions of Wisconsin and Minnesota). Cooke officially retired as a Brigadier General in 1873, after 50 years of service. He retired to Detroit, Michigan and died there in 1895 and was buried in the historic Elmwood Cemetery.

His friendship and charity with the LDS church and leadership over the Mormon Battalion still resonates with the LDS church today. Historians theorize, but have yet to confirm that the city of St. George, Utah, founded in 1861, was named in General Cooke's honor, my taking his middle name.