In 1889, Charles W. Worth bought property at 412 South 3rd Street in Wilmington, North Carolina. He removed the home that currently sat on the property in order to construct a Queen Anne style home. Construction of the home was complete in 1893. The C.W. Worth House remained in the Worth family's possession until 1944. In 1985 it became a bed and breakfast. The C.W. Worth House is the longest operating bed and breakfast in historic Wilmington.

Construction of the C.W. Worth House was completed in 1893. It remained in the Worth family until 1944. In 1985 the house was opened as a bed and breakfast. 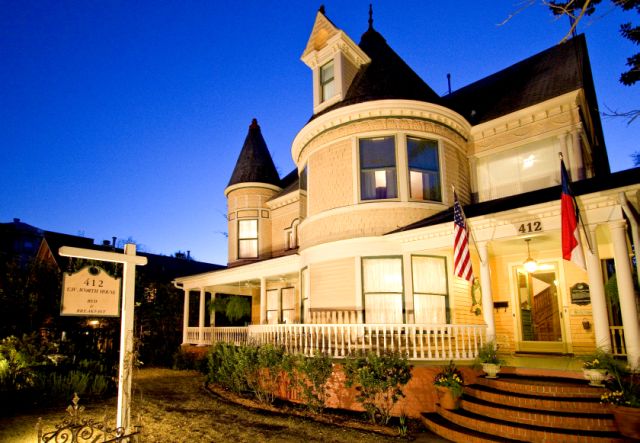 Charles W. Worth purchased the property at 412 South 3rd Street in 1889. There was an existing home here which he had moved in order to begin construction on his Queen Anne-style home, which was completed in 1893. The home remained in the Worth family until 1944. In 1985, the C.W. Worth House became a bed and breakfast. It remains the longest operating bed and breakfast in historic Wilmington.

Worth’s father, David Gatson Worth, was the only son of North Carolina Governor Jonathon Worth of Asheboro. Other Worth ancestors worth noting include Daniel Webster and Benjamin Franklin.

At the turn of the 20th century, Charles W. Worth was a wholesale grocery merchant and a commission merchant in cotton and naval stores. Before and briefly after the Civil War, these areas of commerce were the mainstays of Wilmington’s economy. After Reconstruction, Worth diversified his family business by obtaining Cape Fear Machine Works.

His father, David Gaston Worth, was the only son of North Carolina Governor Jonathan Worth of Asheboro. Among notable Worth ancestors, the family tree includes Daniel Webster and Benjamin Franklin.

A local historian in Wilmington has researched the C.W. Worth House architecture and has concluded it is quite unique. The house combines influences of French sixteenth century chateau and nineteenth-century English Queen Anne style. Locals sometimes refer to the home as the wedding cake house or Queen Anne confectionery.