The Apotheosis of St. Louis is a statue of the city's namesake (King Louis IX of France) and a replica of a plaster statue that served as one of the landmarks at the 1904 St. Louis World's Fair. This bronze version of the statue was designed after the fair and quickly became one of the symbols of the city. The statue has been located in front of the Saint Louis Art Museum in Forest Park since 1906. Prior to the completion of the Gateway Arch, the statue was the principal symbol of the city. Although supplanted by the Arch, this statue continues to serve the iconography of St. Louis for more than a century after the World's Fair.

This statue of the "Crusader King," Louis IX of France, has been one of the leading symbols of St. Louis since the 1904 World's Fair. 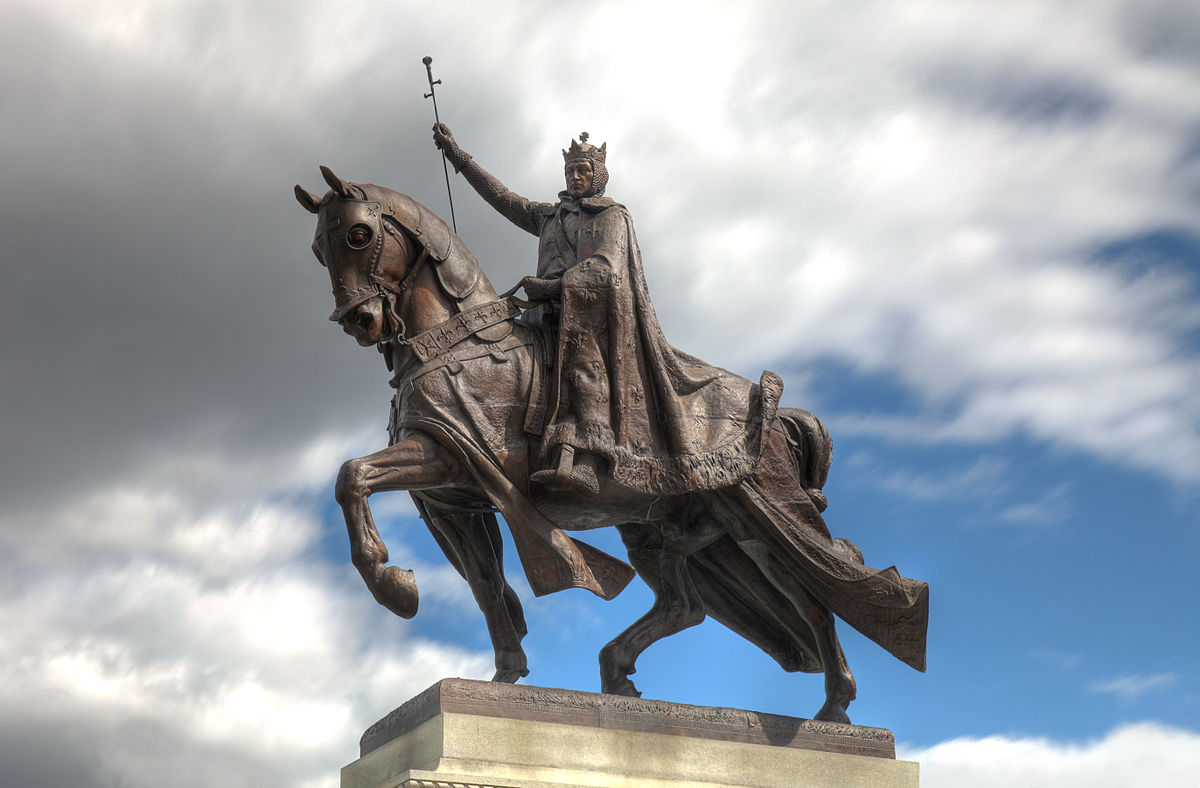 Original Apotheosis of St. Louis made of plaster at the 1904 World's Fair 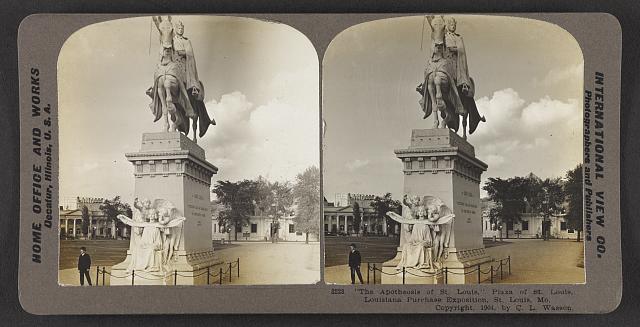 The Apotheosis of St. Louis is a statue of King Louis IX of France, also known as Saint Louis, and the original version of this monument marked the entrance to the 1904 World’s Fair. Much like the other attractions at the fair, the original statue was meant to be a temporary feature. While the numerous buildings and attractions were demolished at the conclusion of the event, the Louisiana Purchase Committee decided to have the statue recast and then donated to the city of St. Louis in 1906.

The statue was sculpted by Charles Henry Niehaus and recast in bronze by W.R. Hodges. Depicting King Louis IX as a soldier valiantly mounted on a horse, his sword is held in a way that the ninety-degree angle between the hilt and shaft resembles a cross. King Louis is dressed in a cloak with the symbol of the French monarchy, the fleur-de-lis. This statue is meant to associate the city with Christianity as well as leadership, strength, valor, and vitality.

King Louis IX ruled France from 1226 to 1270. He succeeded his father at the young age of twelve, so in his early years as king, his mother served as regent. In his time as king, Louis led the Seventh Crusade (1248-1250) in an unsuccessful attempt to regain the Holy Land. King Louis also reorganized the royal administration system, standardized coinage, and made peace with England under the Treaty of Paris (1259). Less than twenty years after King Louis’ death in 1279, he was canonized by Pope Boniface VIII in 1297.

This statue was so central to the identity of St. Louis prior to the construction of the Gateway Arch that it served as the official symbol of sports teams and militia units. For example, the image of the Apotheosis of St. Louis was incorporated into the logo of the St. Louis Browns baseball team. Today, the statue continues to serve as a symbol of the city and a reminder of the 1904 World's Fair.

Meet Me in St. Louis: The 1904 World's Fair and Olympic Games Driving Tour

Best suited for driving, this tour moves through Forrest Park and the neighborhoods west of the park to include numerous landmarks whose histories are deeply tied to 1904 when St. Louis hosted both the Olympic Games and the World's Fair. Known as the Louisiana Purchase Expedition, the 1904 World's Fair marked St. Lousi's arrival on the world stage and hosted exhibits that demonstrated scientific achievements, the growth of industry, and innovation, along with artistic and cultural exhibits. The fair also demonstrated prevailing attitudes, with exhibits such as the Old Plantation providing a comforting and nostalgic view of slavery for attendees while the Philippines Reservation celebrated colonialism. Reflecting both the best and worst aspects of America at the Turn of the Century, the St. Louis World's Fair offers a window to understanding the city and nation at this time. This event created a lasting mark on St. Louis's History and served as the inspiration for the 1944 film "Meet Me in St. Louis," staring Judy Garland.