This house is actually one of three known homes built for Lauritz Smith, the founder of Draper, Utah. A Danish convert to the LDS church, he was chosen to enter into polygamous marriage ordinance in 1867. The two other homes belonging to Lauritz Smith were set for the other wives, since by federal Edmunds Act prohibited polygamy and cohabitation with someone that was not the first wife in a marriage. The homes were built as a form of loophole to avoid persecution of the Act. It is not clear if the building of additional homes worked in Lauritz Smith's favor.

undated photo of Lauritz Smith soon after arriving in America 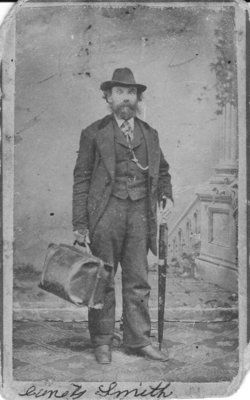 Lauritz Smith before his death in 1924. This is a cropped photo of a larger family gathering. 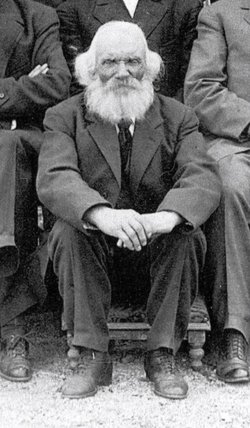 The Laurtiz Smith House as it looks today 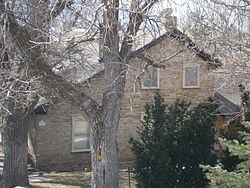 Lauritz Nicholaisen Smith or Smidt, was born on October 5, 1830, in Hjorring, Denmark, to Luthern parents Nicolai Smidt Christensen and Karen Marie Christensdatter. A blacksmith by trade, Smith joined the LDS Church in August 1851. His future wife, Maren Kirsten Mikelsen, whom he did not know at the time, joined eight months later.

After joining the church, Smith labored with the missionaries in the Hjorring area, despite a ban on church services that were not Lutheran in nature. He eventually moved on to Schleswig, then in 1854 joined an emigrant party in Holstien-Gluckstadt. The group crossed the sea to Hull, England, then traveled by rail to Liverpool to arrange trans-Atlantic passage.

The group sailed on January 3, 1854, from Liverpool, England, on the ship Jessie Munn, a Canadian-built square rig. Smith and Maren Kirsten Mikelsen, who had been baptized eight months after him, were married at sea. In addition, Smith was appointed to take care of the German church members on board. The ship arrived in New Orleans on March 22, after which the group proceeded on to the future Kansas City area by riverboat in order to outfit for the trek across the Great Plains to Utah Territory. The group suffered several cholera deaths on the Mississippi and Missouri rivers.

The Smiths arrived in Salt Lake City on October 15, 1854, and settled on 160 acres on the eastern edge of South Willow Creek, near the south end of the valley. Smith had the reputation of being "the best plow-maker in the [Salt Lake] valley." Smith began practicing plural marriage when he married Johanne Kirstine Jensen in 1867.

After dining with the Smiths one day, Brigham Young complimented Maren on her cooking, then asked her to provide food for his bodyguard, Orrin Port Rockwell, when he was in the area. She agreed to do so, and Rockwell subsequently used the Smiths' farm fields as a hideout when seeking protection from his enemies. "A child of Lauritz recounted the experience of taking a pot of stew to the pasture, leaving it, and then returning for the empty pot on a regular basis, not knowing why or who it was for."

The Lauritz Smith House in Draper, was built in c.1865. It includes Colonial Revival and Saltbox architecture.

It is "architecturally important because it represents a rare example of the New England "Saltbox" house in Utah." Saltbox architecture is relatively common in the U.S. northeast where Mormonism began, but is rare in Utah. .

According to the NRHP nomination, "The true saltbox house in New England is characterized by a massive central chimney as well as the shed-like outshut extending out to the rear from the two-story front section. As the type moved into the Midwest and then to Utah it gradually lost the central fireplace in favor of a central-hall and two gable-end chimneys.