Also known as the Free Church of Manahawkin. 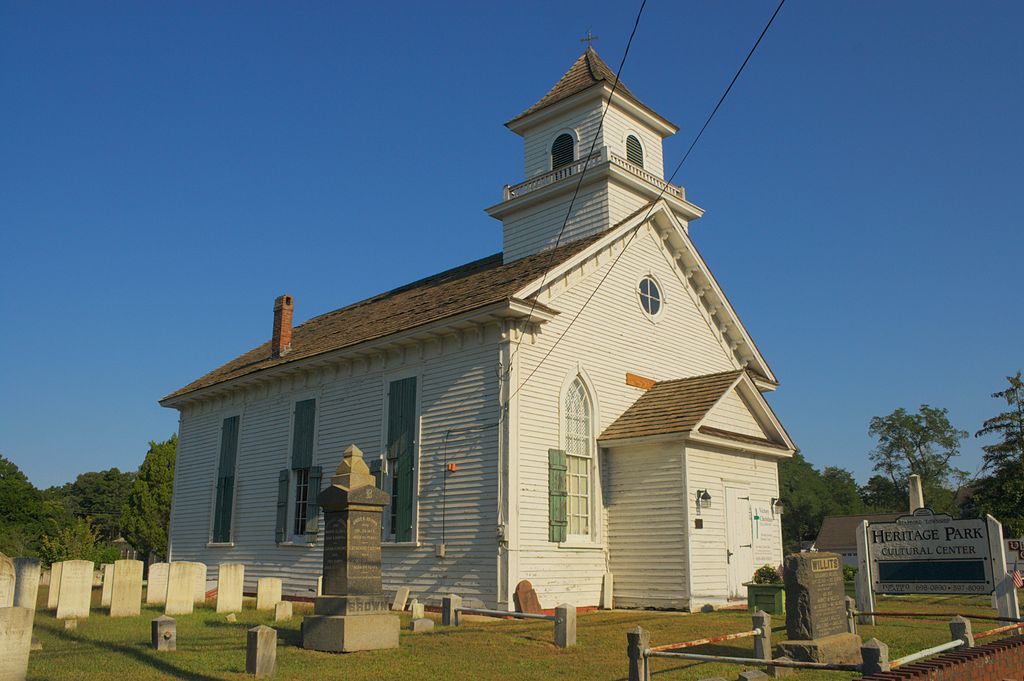 The Manahawkin Baptist Church, or the Free Church of Manahawkin as it was known in historic times, is a wood frame building in good to very good condition. The physical appearance of the building as it stands today is much the same size as it originally was when built. On February 3 1864 a committee was appointed to start remodiling or rebuilding the existing structure. The original record book shows that the walls were weakening and the church as it stands today has the original church within it (floors under floors; walls within walls). The rebuilt Church was rededicated 2nd. week of July 1867. The date of the deed is August 2l|, 1758 and from the deed it appears the Church was already built. From the best information available this church built prior to 1738 was the first church erected in what was then Lower Monmouth County (Ocean County was not formed until a later date), In later years a small addition was built on the back to house the baptismal pool and the spire, or steeple, was lowered to detract lightning after same was hit. The sides are now painted white instead of weathered. The foundation has been examined and is sound. It is built of brick and mortar. The roof was originally native cedar wood shingles. It has been replaced with asphalt shingles. It is again in need of a new roof and it is the hope of the Historical Society to restore it with native cedar shingles as close to the original as possible. The interior is in very good condition. Original wide floor board are intact, as are the wooden pews and pulpit. On the underfloor (original) there are blood stains from the soldiers of the Revolutionary War. Walls and ceiling are sound only needing a fresh coat of paint. The kerosene chandeliers of the 1861 rebuilding are stored in the attic, and will be rehung.  Windows are high and narrow with 75% of the original panes are in tact. The balance, due to breakage, have been replaced with new glass. There is a vestibule with a winding stairway to a second floor gallery (this is mentioned under December U, 1875 entry in the original record book) (showing it was there at that time) which overlooks the full sanctuary. This, too, is in sound condition. Behind the raised pulpit area, the baptismal pool is located covered with removal be floor boards and behind that are two small rooms used in the past as Sunday School rooms. The bell in the steeple is the original church bell, cast in England.

From all information obtainable this Church was the first house of worship ejected in the County. A deed for the land on which it was erected is dated August 2h, .3J58 and from the deed it appears the Church was al- ready built. The lot is described as "Beginning at a stake 265 links north- west from the meeting house." Manahawkin at that time was in 'the lower part of Monmouth County. As the early settlers found it hard to get to Shrewsbury for the town meetings, a petition was drawn up from "The South Eastern Inhabitants of Shrewsbury for a Separate Township". This was circulated and presented to Governor Belcher and on March 3, 1749 a grant was received from King George II establishing the Township of Stafford. Stafford Township was formed even before this area became Ocean County. This Church was orginally known as "The Free Church of Manahawkin 11 providing a pulpit for circuit riders of any denomination. In 1770 Captain Thomas Vebb visited the village, preached and formed or organized the Baptist Society with nine members. During the earlier years this church was the only school for the children in Stafford Township and the only materials available for their teaching was the Scripture. During the Revolutionary War, in the "skirmish at Manahawkin," the military and other wounded were treated and cared for in the Church. The blood stains are still visible on the under-floor boards. Soldiers from the Revolution are buried in the surrounding churchyard. (NOTE: The churchyard also contains the remains of all shipwreck victims from the disasters off the Coast of what is now Long Beach Island and many years ago the State of New Jersey placed a monument to all these unknown victims.) A portion of the minutes in the original record book under the entry of Tuesday Evening, September 5, 1876 reads as follows: "The corporate name was adopted by a majority of the members present. The words to wit the Baptist Church of Manahawkin, New Jersey."