In 1902 John Wanamaker of Philadelphia constructed a vacation spot for his "Wanamaker Cadets" who were cash boys and girls employed in Wanamaker department stores in New York City and Philadelphia. The Wanamaker Complex was used during World War II by the army and in 1949 the camp was purchased by the Presbyterian Church and operated as a summer camp. The Church built nine (9) sleeping cabins, a chapel and recreation hail, an infirmary, a shower building and maintenance shop and garage. The Borough subsequently purchased the property in 1975 and converted the recreation hall into the Borough Meeting Hall, the infirmary was converted into the Municipal Clerk and Tax Collector’s Office, the chapel was modified to house the Post Office and the sleeping cabins have been relocated through the town with one of them now serving as the headquarters for the Borough Police Department. The campgrounds are also used as a recreation site. 1 Island Heights Boro 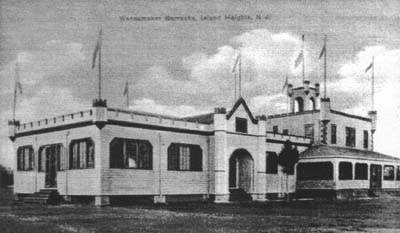 The Wanamaker Camp, located at the eastern end of Island Heights, on the former Westray Farm, was a complex of buildings built in 1900 by John Wanamaker, a Philadelphia and New York department store owner. The complex was arranged around a large open space that faced Barnegat Bay. Young employees of the Wanamaker stores were enrolled to spend two weeks at the John Wanamaker Commercial Institute, a paternalistic system providing education, outdoor activities, military training, and a drum and bugle corps.

The camp closed in 1941 when the minimum age and wage laws were passed. In 1949 it was transformed into a Presbyterian camp, at which time the small cabins to the west were built.