This three-story brick structure was built in 1872 to train black teachers for rural and urban African-American schools located throughout eastern Tennessee. A majority of those trained at the institute were employed in eastern Tennessee, while others served the rest of the state. The Freedman's Institute was phased out and the building used for Maryville Polytechnic, and then Maryville High. In 1938 the building was razed and a new one built for Maryville High School on the opposite side of the campus. 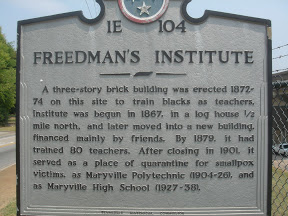 Originally located in a log building nearby, the Freedmen's institute was organized in 1867 through the combined efforts of local Quakers (both black and white), the Freedmen's Bureau and a local African-American newspaper, the Maryville Republican. The paper and the Quakers were the main funders of the Institute, while also leading fundraising efforts. A brick building was constructed between 1872-74.

Although the Institute would close down, for reasons unknown currently, in 1901, the building still played a role for the area both in terms of medicine and education.

Shortly after closing in 1901, smallpox came through the area of Maryville and the building was used as hospital for a couple years. From 1904-1926, the building then became Maryville Polytechnic, then Maryville High School from 1927-1938. Since then the building was abandoned and taken down. A marker designates its location.