The WCHS Museum and former Cadillac Public Library is one of the most historically and architecturally significant structures in Cadillac. It was built in 1905-1906 with matching funds from the Carnegie Foundation to ensure that small, rural towns such as Cadillac would have access to a tool for education. The structure is one of 1,600 Carnegie libraries built between 1886 and 1917 in the United States. Architecturally, it is an outstanding example of classical revival style, and has been recognized as one of the most expensive and elaborate of the fifty-three Carnegie libraries built in Michigan. Now it is the Wexford County Historical Society Museum (WCHS) 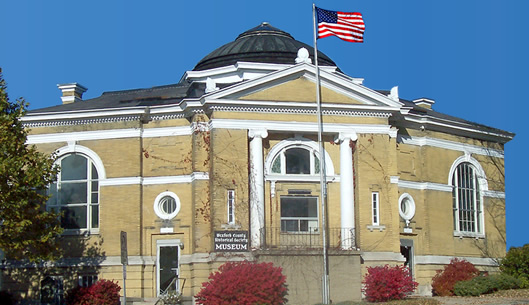 The 5,000 sq. ft. WCHS Museum is the leading source of displays relating to the history of Wexford County. It contains artifacts, photographs, maps, paintings, documents and exhibits of daily life in northern Michigan that reflect the community's history since its inception in the 1870s.

All photos and information is from the website of the Wexford County Historical Society Museum.

Hours are seasonal. Call or check the website for current hours. www.wexfordcountyhistory.org