The smallest post office in the United States is located in Ochopee, and is no bigger than a closet. This is a 7x8 foot building was previously used as an irrigation shed before a fire destroyed a general store that doubled as the town's post office. Despite its small size, this post office services citizens within 132 miles, including the five to six hundred residents of Ochopee. 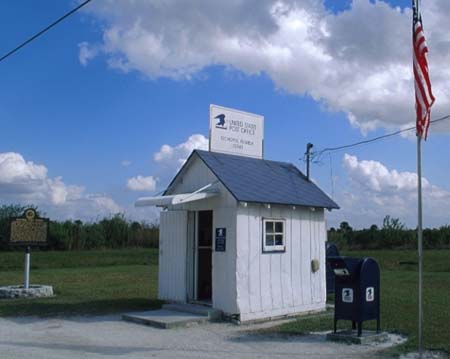 Over 50 years ago in 1953 in the small town of Ochopee, FL a small town fire burned down the general store that also held the mail. The post master in town needed a new post office quickly. They couldn't get the money for a new building fast enough so they had to use what was available. Luckily for them there was an empty shed available. They converted the shed into a post that is still in use today.
This post office is the smallest post office in the United States. It is a tiny shed that is being used as a post office instead of a storage facility. The town using the shed is a small town with a population of less than 600. When they first started using it they thought that this was temporary but 50 years later they are still using it.  It seemed to be working for them so they kept it going.
This is a must see attraction on your way to the Florida Everglades. Yes it is just a small shed but its so much more than that. You will have a new appreciation for your current working conditions as I am sure most jobs have bathrooms and fast food locations nearby for lunch. They do have air conditioning so that is a positive thing. I use the mail service often to send mail and I am very fascinated that mail can actually leave from such a small location without the big fancy machines to sort. Really neat place here and I hope you will visit when nearby in Florida