The Hermitage is a historical plantation and museum that was home to Andrew Jackson, the controversial military leader and 7th President of the United States. The site includes exhibits related to his life and the operation of the plantation, including the experiences of the 150 men, women, and children that Jackson enslaved. The grounds also include the final resting place of Andrew Jackson and his beloved wife Rachel.

The Hermitage is open daily as a museum and includes exhibits related to the life of Jackson from his early years to his Presidency. 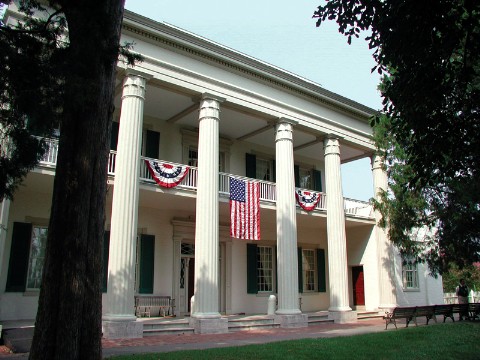 The Hermitage is open daily as a museum and includes exhibits related to the life of Jackson from his early years to his Presidency.

President Andrew Jackson’s plantation, known as the Hermitage, remains one of the premier memory sites in the United States. Although visitors will find the Hermitage interesting in its own right, the museum has taken on an added significance in recent months as President Trump has elevated the profile of Andrew Jackson in public conversations about America's past. Located near Nashville, Tennessee, Hermitage has served as a museum since 1889 and as a National Historic Landmark since 1960. Hermitage ranks alongside Mount Vernon and Monticello as one of the top five most attended presidential sites in the country and attracts 185,000 visitors a year (Hance, 2015). As a presidential museum, Hermitage is unique: it offers a rare glimpse into one of the nation’s most legendary and controversial presidents, the underappreciated post-Revolutionary/pre-Civil War historical period, and the institution of slavery.

Andrew Jackson is one of a handful of presidents who has symbolically dominated their era, giving rise to terms such as the “Age of Jackson” and “Jacksonian democracy.” Presiding over the young American nation during a transitional period where the founding generation receded from the national stage and a new generation of leaders flexed their muscles, Jackson has become synonymous with the Western frontier, martial spirit, and for many, slavery and Native American removal. The Hermitage offers many insights into both Jackson the man and Jackson the myth. In 1804, after retiring as a judge, Jackson purchased the 420-acre plot of land now known as the Hermitage to pursue “a life-style that included slaveholding, real estate speculation, cockfighting, and horse racing, especially the last” (Parsons, 2009, p. 19). Although Jackson initially kept around two-dozen slaves on site, that number would later balloon into the hundreds. For the next several decades, Jackson and his wife Rachel lived in a series of log cabins on the property, expanding their cotton operations and building what would become his iconic mansion while hosting distinguished guests such as Aaron Burr, President James Monroe and Marquis de Lafayette (Mifsud, 2017, p. 92). Jackson’s home has been said to encapsulate “Greek Revival” architecture (Brackett, 2001, p. 419), sporting large cylindrical columnns in a manner consistent with the style of the era. Although elements of the property were restructured after a fire in 1834, the Hermitage is “identically as it was when Andrew Jackson died in 1845. Nothing has been added to it; nothing has been taken away” (Horn, 1961, p. 6).

Starting in 1889, the Hermitage was converted into a museum, maintained by “the Ladies’ Hermitage Association,” which “assumed responsibility for the upkeep of the mansion and immediate surrounding area” (Battle, 2004, p. 34). The Hermitage Museum consists of the Andrew Jackson Center (which features museum exhibits, a gift shop, and auditorium amongst other things), Jackson’s personal mansion, and other various buildings and features that can be explored on the premises. The Ladies’ Hermitage Association have emphasized the multidimensionality of the Hermitage, appealing to “multiple publics . . . to broaden its appeal and distinguish itself from other sites in the region” (Battle, 2004, p. 34). Importantly, the curators have attempted to “enhance the representation of slavery” by affording slaves a prominent place in “the central narrative of the museum” and widening the focus of the museum beyond Jackson to include a more holistic account of life on the plantation (Battle, 2004, p. 33).

Hermitage has also assumed a prominent place in presidential memory, attracting presidents to its scenic acres as they seek to invoke Jackson’s complicated legacy to justify their political agendas in the present. During the depths of the Great Depression in 1934, Franklin D. Roosevelt and his wife Eleanor visited Hermitage, touting Jackson to advance the populist notion that the government ought to “belong to the people, not the wealthy” (Schuessler, 2017, Franklin Delano Roosevelt, 1934 section, para. 2). In 1967, Lyndon Johnson would also visit the Hermitage, to celebrate Jackson’s 200th birthday. Johnson linked Jackson’s memory to his own Great Society agenda, arguing that “the task Jackson set is still undone” because “we are still striving to involve the poor, the deprived, the forgotten American, white and Negro, in the future of their society” (Johnson, 1967b, paras. 24-25). Later that day while addressing the Tennessee state legislature, Johnson would invoke Jackson’s martial exploits to argue in favor of his Vietnam strategy, declaring that “in our time, as in Jackson's time, courage and vision, and the willingness to sacrifice, will sustain the cause of freedom” (Johnson, 1967a, p. 348). In 1982, Ronald Reagan would also visit the Hermitage, to make “the case for taking on what he saw as a bloated government,” emphasizing Jackson’s reputation as a Western frontiersman and political outsider to cast a favorable light on his own qualities (Schuessler, 2017, Ronald Reagan, 1982 section, para. 1).

In the spring of 2017, Hermitage was once again thrust into the political spotlight when President Donald Trump visited to commemorate Jackson’s 250th birthday. Although Presidents George H.W. Bush, Bill Clinton, George W. Bush and Barack Obama consciously avoided the Hermitage as Jackson’s legacy came under increasing scrutiny and scorn, Trump utilized his Hermitage visit to deliver a speech that explicitly linked himself to the 7th president, touting their shared outsider status and battles against political elites. Hermitage remains a highly contested space, frequently inviting protests from Native Americans and other groups who see Jackson’s key legacy as genocide and the perpetuation of white supremacy. For all these reasons and more, Hermitage remains an intriguing site for all those interested in the intersection of presidential history, slavery, and political mythology.

Johnson, L.B. (1967a). Address on U.S. Policy in Vietnam Delivered Before a Joint Session of the Tennessee State Legislature. In Public Papers of the Presidents, Lyndon B. Johnson, Containing the Public Messages, Speeches, and Statements of the President, 1967, Book I--January 1 to June 30, 1967. Washington: United States Government Printing Office. 348-354.

Johnson, L.B. (1967b). Remarks at the Hermitage at Ceremonies Marking the 200th Anniversary of the Birth of Andrew Jackson. The American Presidency Project. Retrieved from http://www.presidency.ucsb.edu/ws/?pid=28134