Built during the years of 1785-1790, the Eureka Schoolhouse is the oldest one-room schoolhouse in the state. It served students, many of which went on to Ivy league institutions, for over a century. After siting vacant for many years, a group of local citizens restored the structure and documented its historical significance. 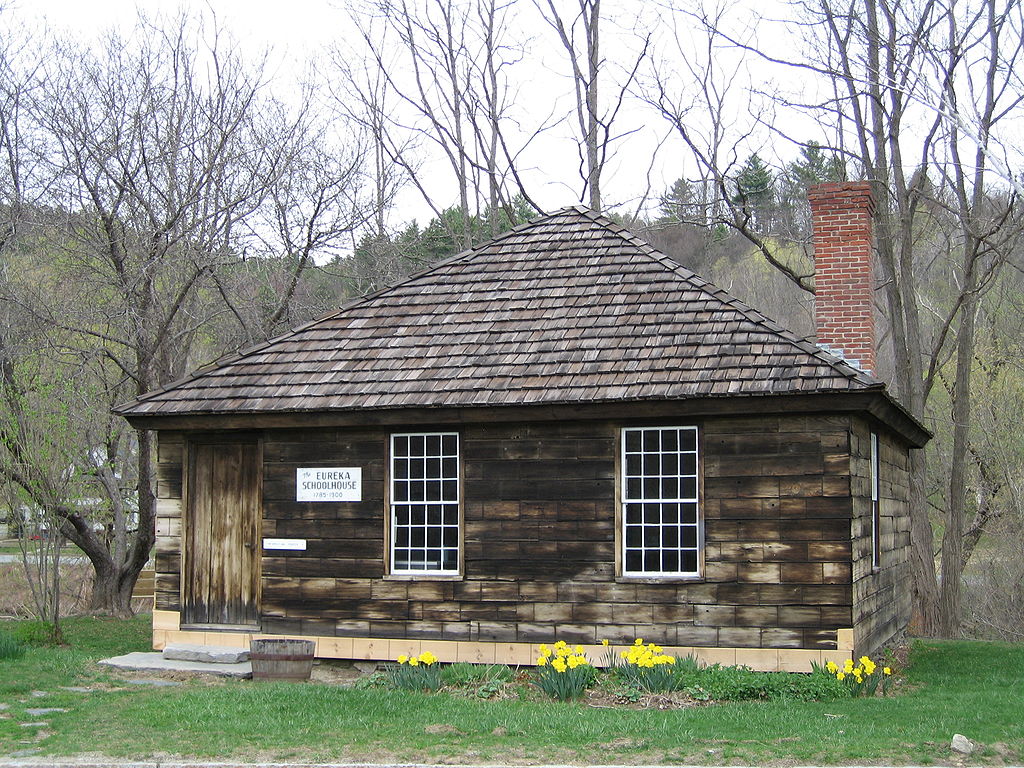 The construction of the schoolhouse was began in 1785 and completed five years later in 1790. It is comprised of pine boards that were scored in order to appear like stone blocks. It is thought that an early settler William Bettergneau built the school to serve the handful of families that were living in the newly settled region.

The alleged story of how the school received its name is that after a Yale student named David Searle graduated, he traveled north to the new frontier and when he arrived at Fort No. 4 he was told of a new school that was in need of a teacher. Searle proceeded in pursuit of the schoolhouse, and when he approached the structure, he said "Eureka!" (meaning "I've found it" in Greek). Searle became the first school teacher there.

Around 1837, the schoolhouse was relocated to across the road and remodled as well. The Ashlar siding was replaced with clapboard and the hip roof with a gable roof; additionally a 6 over 6 light sash went in place of the 6 over 6 light sash.

The community celebrated the school's centennial on October 30, 1885, but due to a decrease in population the school eventually closed down in 1900. For over fifty years, the schoolhouse stood abandoned. However in 1958, a group led by Anna Harness Beardsley put forth efforts to restore and preserve the building's historical significance. The group of citizens, known as the Eureka Schoolhouse Restoration Committee, carefully disassembled the school and reassembled it at a site where it would receive more visitor exposure. According to Vermont.gov, "[a]rchitect Andrew Titcomb planned the restoration and utilized much of the original fabric to restore the building to its original appearance. Many period antiques were donated to appropriately furnish the structure which today reflects its eighteenth century heritage while offering information to visitors." The reconstruction project was completed in 1968, and the schoolhouse was dedicated to Beardsley who passed away not long after.