Reverend George B. Hitchcock House. A minister of the Congregational Church, Hitchcock was an ardent abolitionist and an agent for the Underground Railroad.

The cellar doors at the Hitchcock House in Lewis, in western Iowa, were used by escaped slaves on the Underground Railroad to access the basement and hidden room. The house was built in 1856 by the Rev. George Hitchcock. 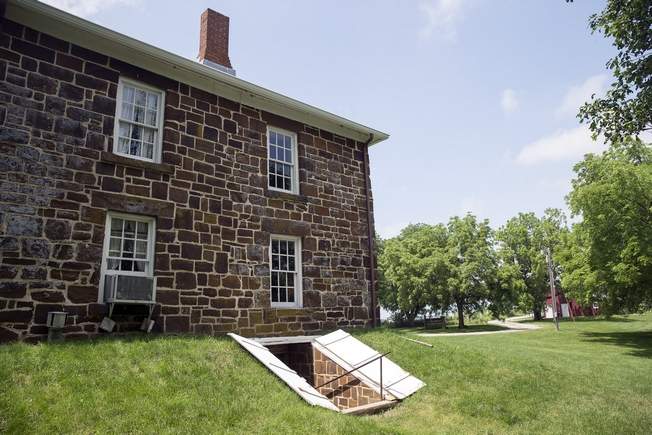 Born in Massachusetts in 1812, Hitchcock became a student of ministry, and in 1844 was ordained a minister in the Congregational Church. He worked as a traveling "circuit" preacher in the frontier country of western Iowa following his ordination. Settling in Lewis in the mid-1850s, Hitchcock built a log cabin where he lived until the completion of his stone house around 1856. It was this house that Hitchcock used to aid the Underground Railroad.

In 1865, Hitchcock was called by the Congregationalist Church to work in Missouri, where he was given the opportunity to educate and minister freed Blacks. Two years later he moved to Kansas to carry similar duties in that frontier area. His home in Iowa stands as a testament to his role in the antislavery movement and his involvement in the Underground Railroad.

The Hitchcock House, along with the farm of Oliver Mills was stop number four on The John Brown Freedom Trail.

The John Brown entourage left the Tolles Cabin and headed northeast in to a snow storm on February 13, 1859. They travelled toward Lewis, Iowa, and the farm of Brown’s cousin Oliver Mills.

Mills lived just south of Lewis, then the county seat of Cass County. Reverend George B. Hitchcock, a Congregationalist, resided about a mile due west of the Mills place (see map). Mills and Hitchcock worked together in the antislavery movement. The Hitchcock House (pictured) is a National Historic Landmark and one of the few physical reminders of the Underground Railroad remaining in the state.

Oliver Mills was born in Trumbull County, Ohio in 1821. At 29, he removed to Iowa and by 1857 he had settled near Lewis. After his involvement with the Underground Railroad, Mills continued to be active in civic life. He was elected to the Iowa General Assembly in 1872 and served twenty years with the state agricultural society. Notably, he promoted the establishment of the state agricultural college, now Iowa State University.