Also known as Castroville Nihon Gakko, this school was built in 1936. It served the Japaneses-American sharecropping families in the area. It also acted as a Buddhist temple and a community meeting hall. However, the school was only open for six years. It was closed in 1942, after the federal government ordered that all Japanese-Americans in the area be sent to internment camps. The building has been preserved and now includes a small interpretive sign that includes the history of the building and its connection to the internment of Japanese Americans, one of the most shameful episodes of American history in the mid-twentieth century. 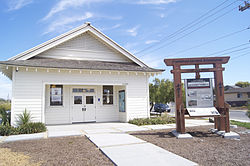 While the building is simple in design and rather unremarkable, it does reflect Japanese temple architecture. It was built by Kiezo Motokane and Kobayashi. One of the other instructors at the school was the Reverend Bunyu Fujimura. The FBI arrested Reverend Fujimura in early February of 1942.

The school building stood vacant when the Japanese community was evacuated to the Salinas Rodeo Grounds in late April of 1942. As the feelings towards Japanese-Americans during this time was very negative, the return to the Castroville was very difficult. The school was often used as a bunkhouse. Sometime following World War II, the building was acquired by the Castroville Elementary School.