Renaissance Centre as it looks today 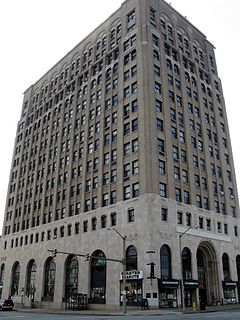 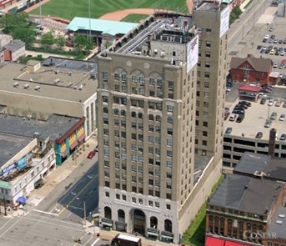 View of Erie from atop the Renaissance Centre 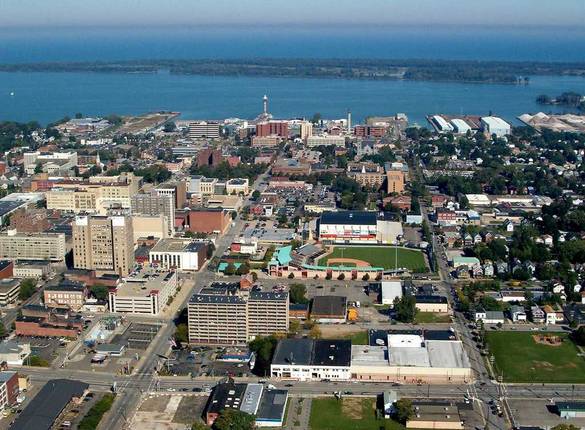 Renaissance Centre shortly after it was completed 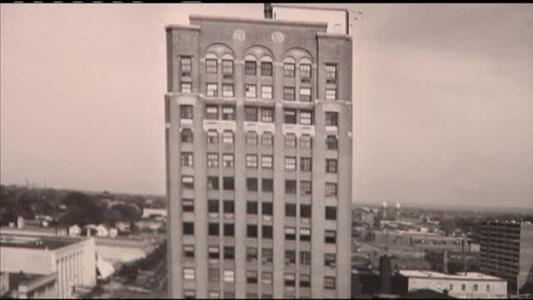 Shortly after the passage of the National Bank Act by Congress in 1864, several banks were chartered in Erie. One of these, Dime Savings and Loan, was founded in 1866; it was reorganized as the Erie Trust Company in 1902. The economic boom following World War I set off a flurry of building activity in downtown Erie, including a ten-story skyscraper at 12th and State Streets. By the mid-1920s, the Erie Trust Company had become the dominant banking institution in the city and needed space to expand. The bank hired the New York City-architectural firm Dennison and Hirons in 1925 to design its new headquarters. The Erie Trust Company Building was completed in 1928 at a cost of $2 million. A year later, the stock market crashed sparking the Great Depression, and, by 1933, the Erie Trust Company had gone bankrupt. Its remnants and that of another defunct bank were reorganized into the National Bank and Trust, which continue to occupy the building now owned by the Commonwealth of Pennsylvania.

The state auctioned off the Erie Trust Company Building in 1943 in bankruptcy court and it was acquired by the Tenth Street Building Corporation, a local real estate company, for $377,000. The building was renamed after the company's president at the time, G. Daniel Baldwin, in 1945; Baldwin died the next year. National Bank and Trust continued to lease the first floor, along with offices on the third, until it was taken over by First National Bank in 1951; First National maintained a presence in the Baldwin Building until the 1980s. Despite its owners operating a "large and profitable" business, the occupancy in the building decreased to less than 30 percent in the 1970s and 1980s.

The G. Daniel Baldwin Building was, again, put up for auction in June 1996. The Tenth Street Building Corporation donated the building to the Greater Erie Charity Golf Classic where it sold to local developer Tom Kennedy for $315,000 with the proceeds going to charity. The Baldwin Building was renamed Renaissance Centre as part of the effort to revitalize the building; a new sign, fashioned to resemble its limestone cladding, was installed over the old name. From its purchase in 1996 to late-1998, the Renaissance Centre underwent a $2.2 million restoration. The Renaissance Centre was listed on the National Register of Historic Places on August 10, 2000.

The Renaissance Centre has a total floor space of 150,000 square feet spread across its 14 floors. Originally, the first floor housed the bank lobby, but it has been divvied up into an atrium and retail spaces for businesses. Six murals by New York-painter Edward A. Turnbull depicting historical events from Erie History were located on the first floor; five remain, but were hidden by renovations. The 14th floor offers views of Presque Isle Park in Lake Erie and, on clear days, Long Point, Canada.