Blakeley Plantation was built in 1820 by John Augustine Washington II and is now privately owned and placed on the National Register of Historic Places. Generations of President George Washington's family, slaves, and prominent members of the Jefferson County community have inhabited these grounds. Historical figures such as Richard Washington, was one of the chosen to join the posse that pursued John Brown and killed one of the raiders, called Blakeley home in 1855. Roger Preston Chew, whom led Jefferson County's only Confederate artillery unit who was engaged in more skirmishes and battles than any artillery unit in the entire Confederate army, resided here from 1875-1892. Sadly not every slave's story is known; however, slaves such as Hannah Parker left behind information regarding her life and the lives of many others who born into slavery at this site. Philanthropist Raymond Funkhouser restored the home in 1943; this structure remains an example of the value of historical preservation of the symbols of America's past.

Close up of the 4 columns and portico added by Funkhouser in 1943. 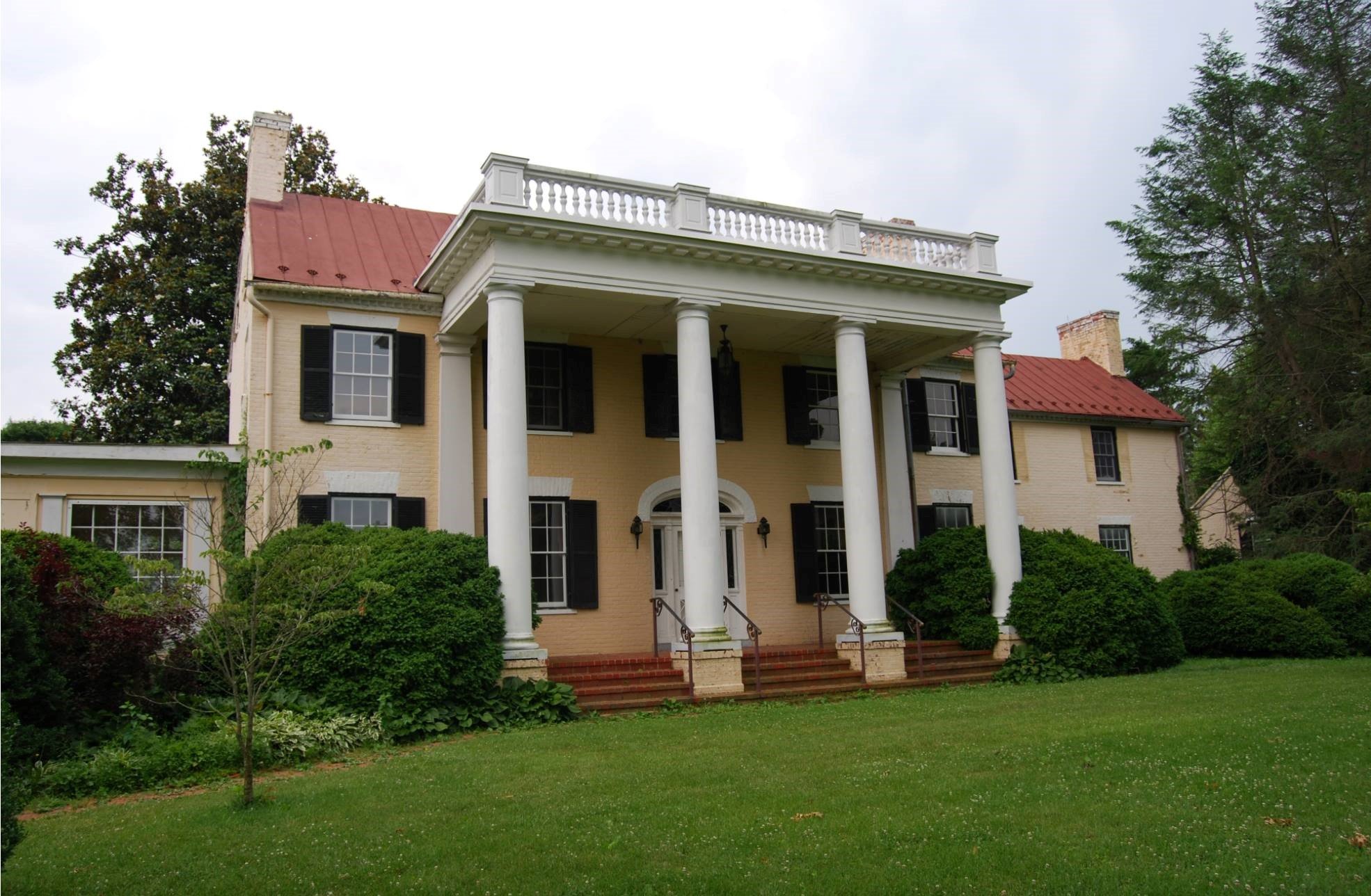 A rear view of the house and gravel drive.

This front facing photograph captures the beauty of the front facade as well as the grounds. 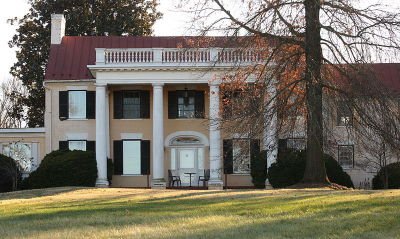 This once Federal style architecture was transformed by Funkhouser in 1943 with the addition of four columns and portico.

The rear facade and grounds of Blakeley are not as ornate as its' neighboring Washington plantation Claymont court 60 yards away, yet one can still sense the efforts to preserve this historic site.

This front facing photograph captures the beauty of the front facade as well as the grounds. 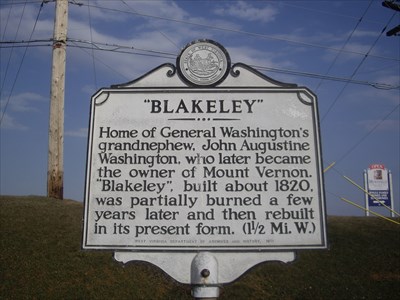 Blakeley Plantation, also known as the Washington-Chew-Funkhouser House, was built by President George Washington’s great-nephew John Augustine Washington II in 1820. Originally constructed as a two story Federal style building, the front entrance was an ordinary door surmounted by a rectangular transom. In 1864 the home suffered considerable damage by a fire which destroyed the roof and second floor. In 1943, the home, which was in a slightly run down condition, was rehabilitated by Raymond J. Funkhouser. The most extreme aspect of the restoration was the removal of the one story portico front façade to be replaced by the two story, decked three bay portico, supported by 4 Roman Doric columnns and two pilasters. Despite these alterations, this remains a period renovation and was placed on the National Register of Historic places in 1982.

Blakeley Plantation was home to several generations of Washingtons. John Augustine II, when he inherited Mount Vernon in 1829, left Blakeley to his son John Augustine III; when Augustine inherited Mount Vernon in 1832, his brother Richard Blackburn Washington took over Blakeley. Blackburn, who was one of the men chosen to go after the infamous John Brown, remained the owner of the plantation until losses from the war and expenses of repairing the house after the 1864 fire, forced him to sell to his niece Louise Fountaine W. Chew and her husband Roger Preston Chew. Chew, commander of the Confederate army's artillery unit "Chew's Battery", began the war as a captain and ended a lieutenant colonel. In 1871, Chew was a successful farmer, businessman, and served on the 1896 committee that oversaw the 1st experiment at rural free mail delivery in the U.S. Chew was elected 3 times to the W.V. house of delegates. Blakeley passed ownership again in 1892 to prominent Jefferson County citizen John Burns. In 1943, Raymond Funkhouser oversaw the restoration of the famed plantation as well as many other Washington homes.

Many generations of Washingtons were born here, but also many generations of slaves. One such slave, Hannah Parker, was born on April 4, 1826 where she spent most of her childhood at Blakeley. Hannah grew up surrounded by her brothers and sisters and also 25 of the plantation's 60 slaves in 1832 were 12 years old and under. This surplus of slaves at Blakeley answered the labor shortage at Mt. Vernon; by 1832, they had transported perhaps 5 slaves to their sister plantation. Two such slaves separated from their families were the brother and sister Jim Starks, a 27 year old field hand, and Eliza Smith, a 21 year old house servant, who were forced to leave their parents and two brothers and two sisters behind. The trusted housekeeper of Blakeley “Aunt Jenny” was severed from her husband Mingo and her 5 children until 1841, when one son Gabriel was sent to join her.

The slaves transplantation multiplied in 1841 in an attempt to revive Mt. Vernon’s household agriculture to commercial agriculture. Hannah, her sisters Julia and and Betty and her brother Edmund were part of this business deal. The cook Milly remained behind while her mother was sent 60 miles away. In 1847 Sally, along with her small child, was sent away as well; due to what Washington believed as an act of severe "misconduct", mother and child were sold for $525 to a slave dealer in Alexandria.

Blakeley Plantation has endured the test of time and remains a critical part of Jefferson County's heritage and community. The Washington-Chew-Funkhouser House is more than a house, it is a wealth of history, knowledge, and voices of the past speak to us memoirs of happiness and of misery. Digging and researching into the history of this historic site produces multitudes of well documented life experiences.