This historic one-room schoolhouse, which houses the Ovie and Jesse Cline Museum, preserves the legacy of rural education in Appalachia. The building dates back to 1888, when it served as a schoolhouse for a rural part of Cabell County. It remained open until 1955, at a time when one-room schoolhouses across the county were closed in favor of larger, consolidated school systems. After being used as a storage shed for many years, the schoolhouse was relocated to the campus of Marshall University in 1995 thanks to the efforts of Paul Lutz, a History Department faculty member. The museum was named after the parents of Phil Cline, who attended and taught in one-room schools. The interior presents a recreation of a one-room schoolhouse, with Peabody-style desks, era-appropriate books, and a pot belly stove. The museum is open by appointment. 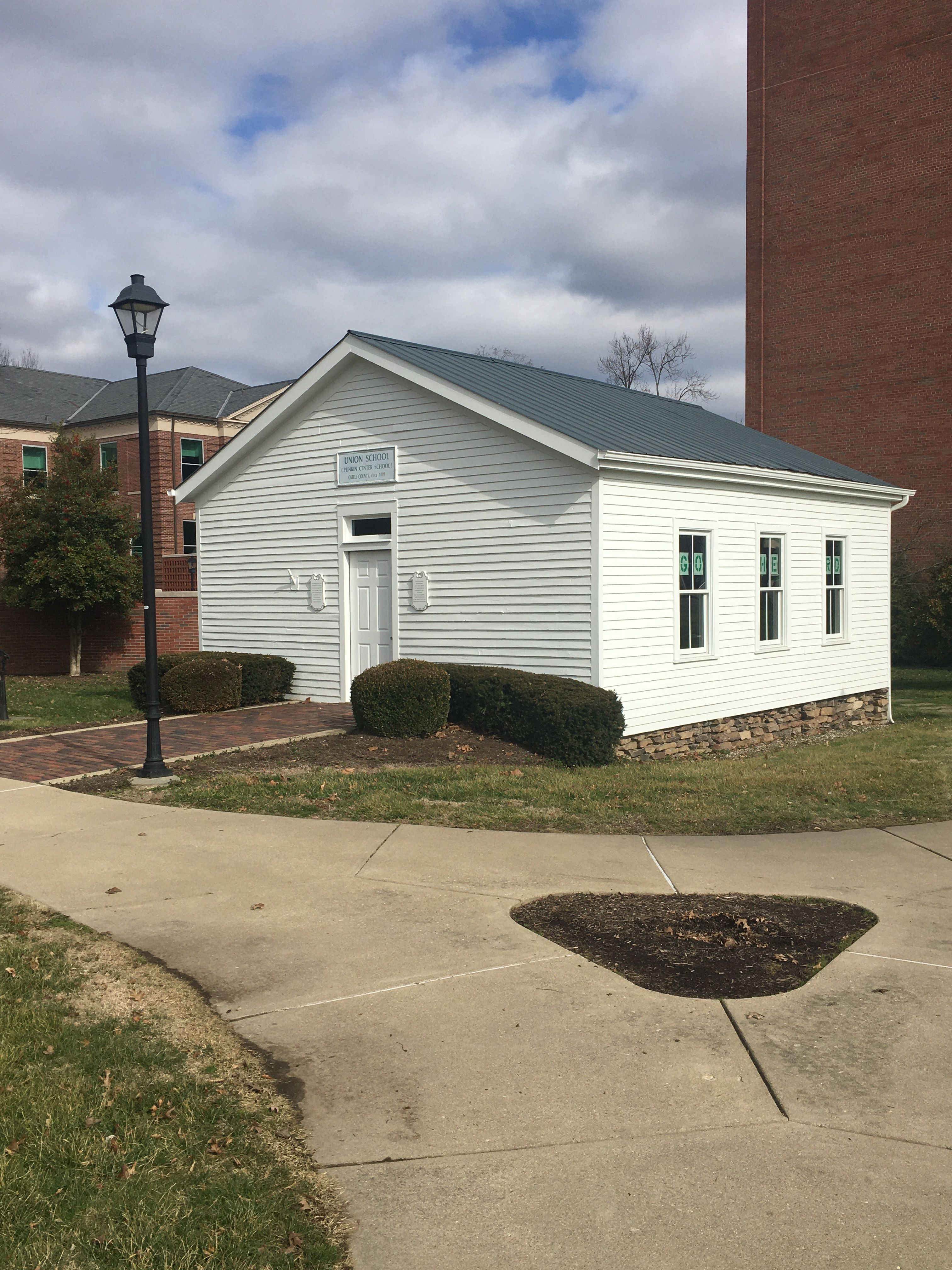 The museum's blackboard in 2016 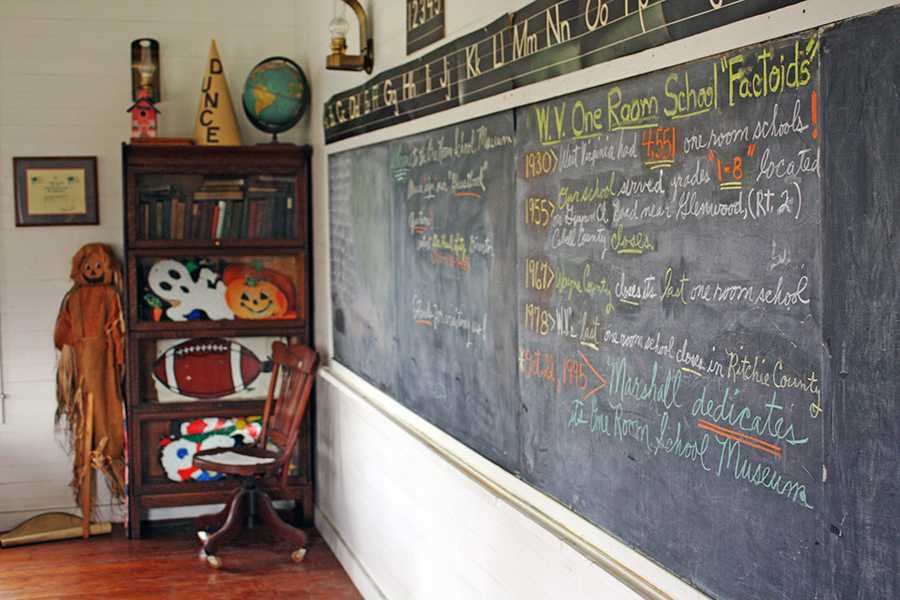 Children in a one-room school, Marion County, about 1900 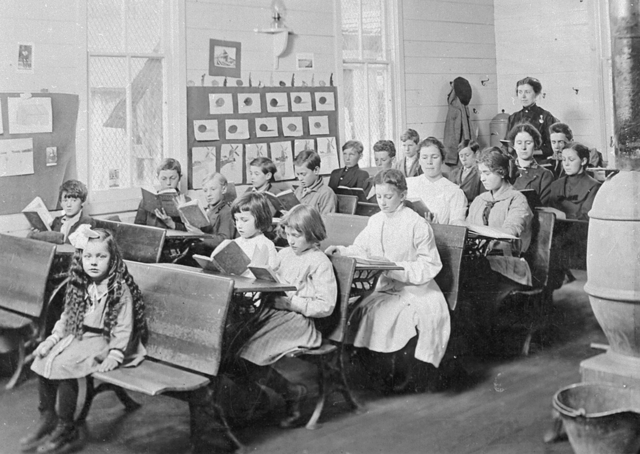 The Union School classroom, circa 1951. 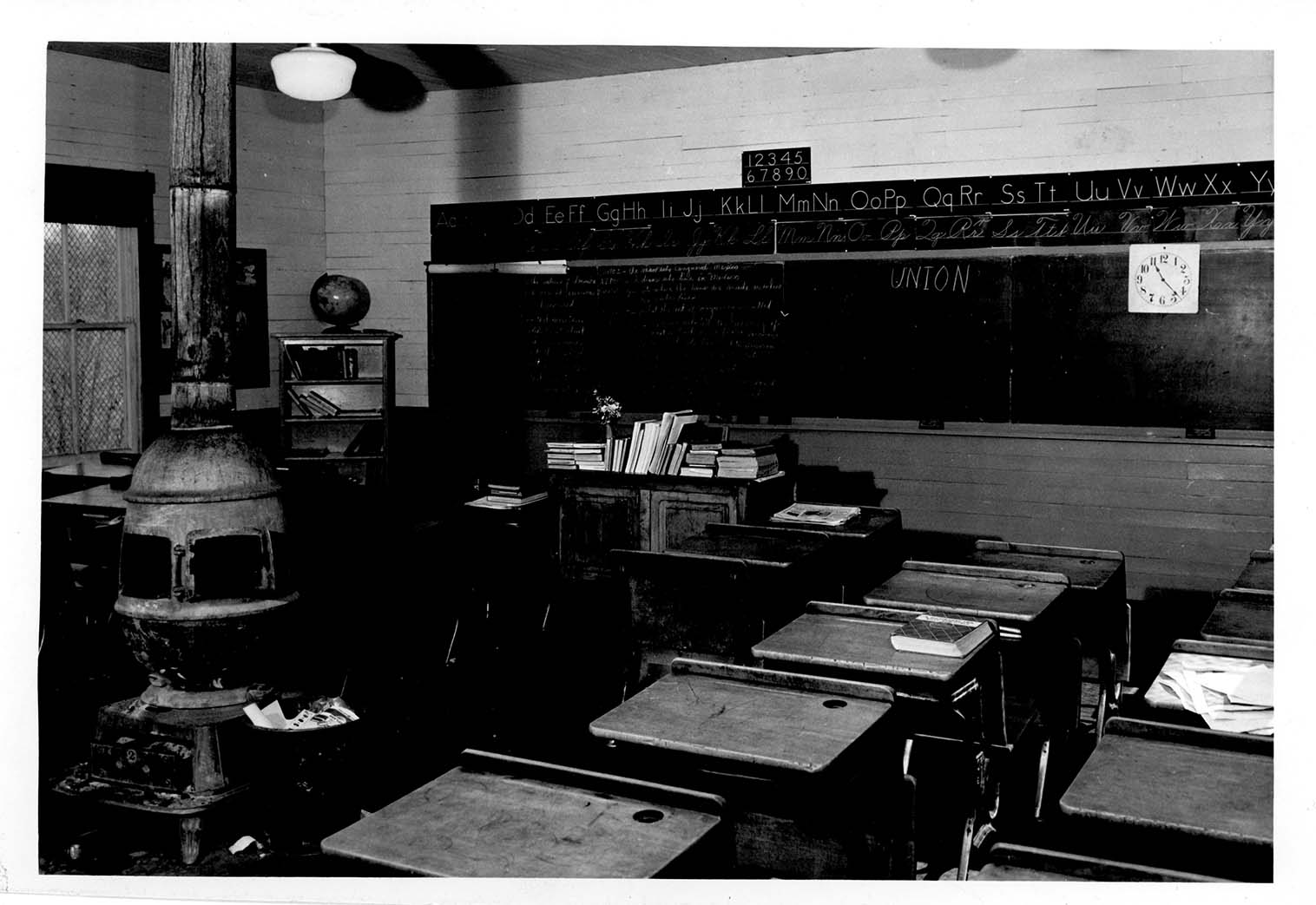 Union School at its original location in Cabell County, likely in the 1950s. 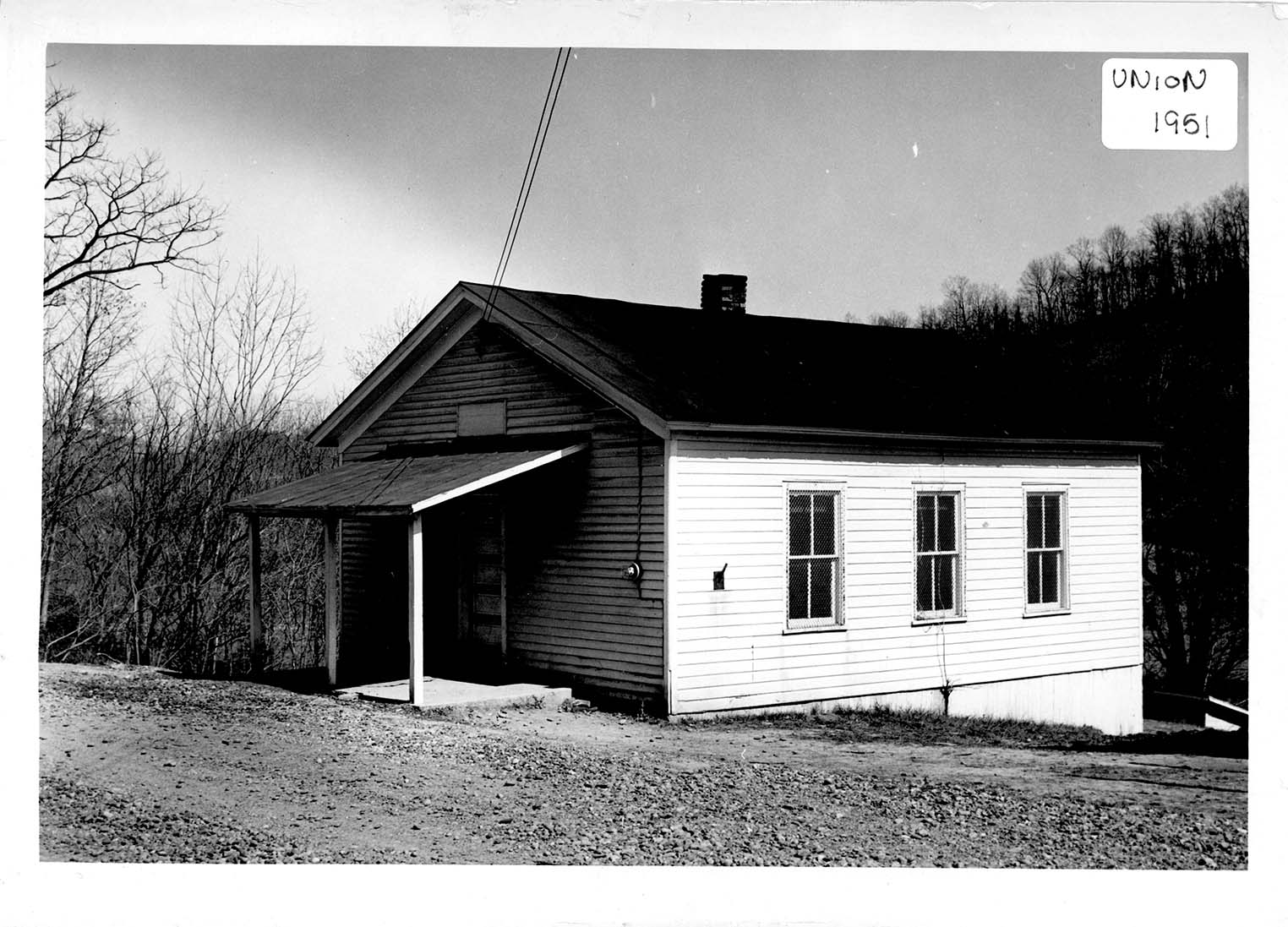 This highway historical marker was installed in 2004. 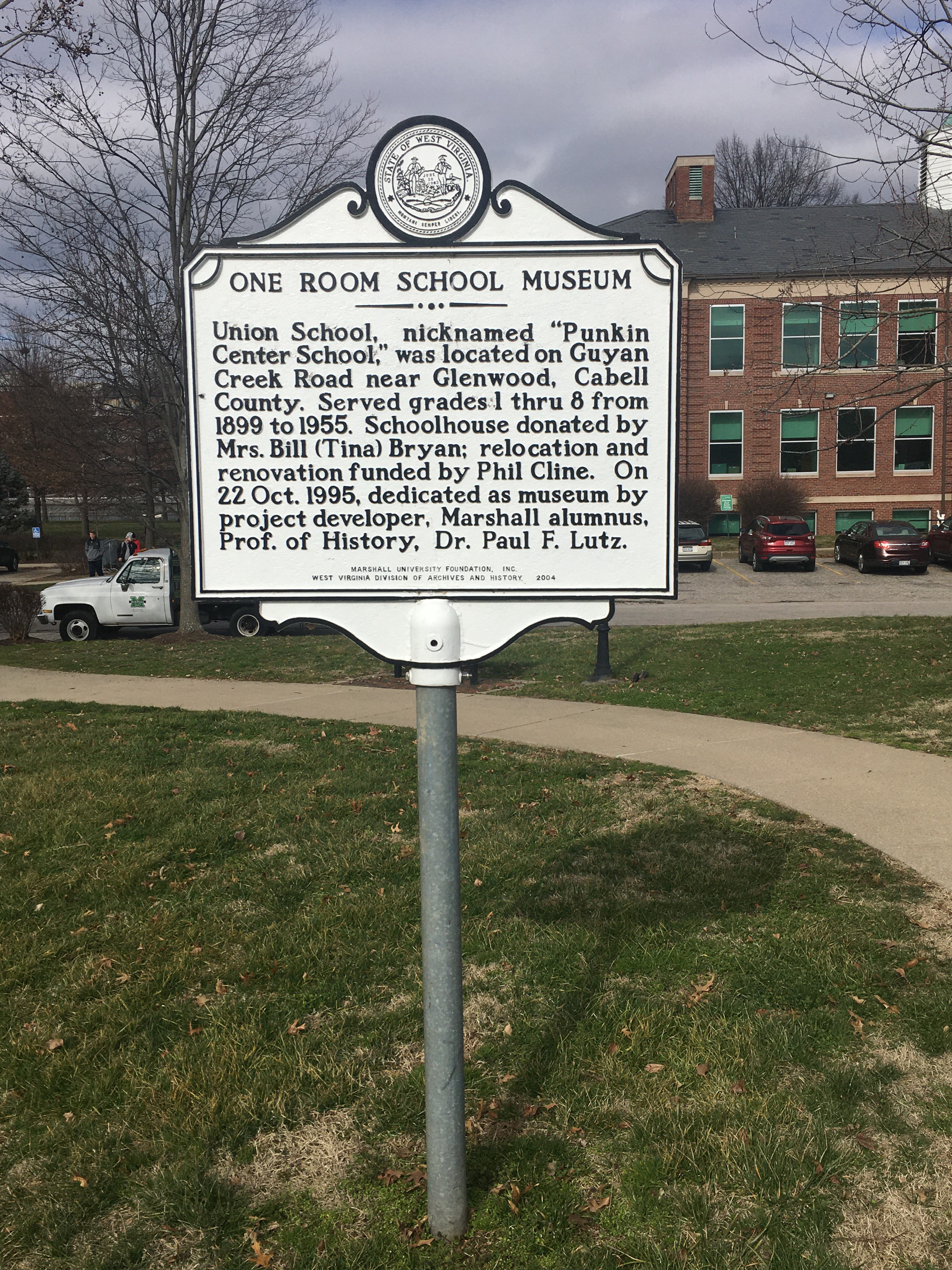 The school sits in the Philip C. Cline Plaza, named after a donor who helped fund the creation of the museum. 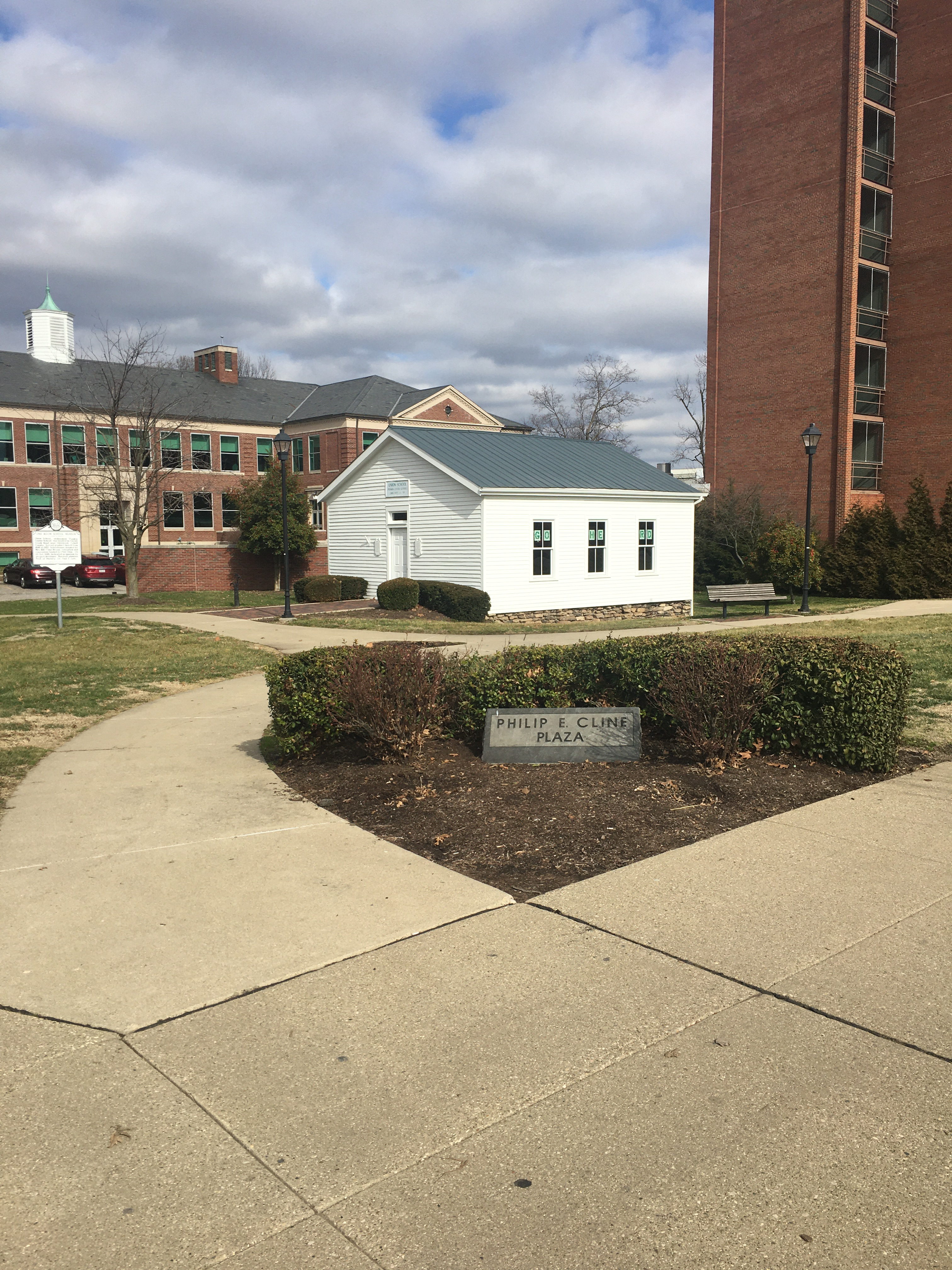 Union School, nicknamed “Punkin Center School,” was located on Guyan Creek Road near Glenwood, a rural part of Cabell County. Built around 1888, it was used as a school for the area’s students in the first through eight grades until it closed in 1955. By that time, most one-room schoolhouses were being phased out, as the educational system was consolidated and improvements in transportation made it possible for students to reach schools farther away. Union School was one of the few one-room schoolhouses that has been preserved in West Virginia. Most others, such as the Cuzzy One-Room Schoolhouse in Lincoln County, one of the state’s last one-room schoolhouses to close, were either repurposed, abandoned, or demolished.

One-room schoolhouses formed the foundation of education in Appalachia during the 1800s and early 1900s. Prior to 1933, when West Virginia introduced a school system based on county units, there were nearly five thousand one-room schoolhouses across the state. Cabell County, for instance, had over one hundred schools, and Wayne County had one for each of its seven school districts. Students typically walked to school from their homes, and some only attended during months when the weather permitted such a walk. Teachers, who were often as young as eighteen, often had to find room and board with their students’ families or face traveling for miles on horseback to get to work.

School buildings themselves were built as cheaply as possible, often with rough frames, poplar lap-siding, and tin roofs. Windows provided the schools with natural light, while potbelly stoves heated them in the winter. Students sat in the classroom according to their age, with the youngest students at the front and the oldest in the back. It was also common for boys and girls to be seated on opposite sides of the room. Textbooks were frequently passed down from family members over time, as there was little to no funding for teaching materials. Blackboards and hand-held slates were often used in place of paper, which was more costly.

The One-Room School project was initiated in 1990 by Dr. Paul F. Lutz, a Marshall University history professor. After he was inspired by a student’s idea to interview a former one-room school teacher, Lutz spent five years searching for a schoolhouse. The former Union School had been used for storage, but its owners agreed to have it relocated to Marshall’s campus, where it now sits between Holderby Hall and the Campus Christian Center. Planning grants from the Cabell County Commission and the City of Huntington, as well as donations from Tina F. Bryan, Phil Cline, Marshall alumni, and the Marshall University Foundation funded the project. The schoolhouse was formally donated to Marshall in memory of James “Bill” Bryan, husband of donor Tina Bryan. On October 22, 1995, the relocated schoolhouse was dedicated as the Ovie and Jesse Cline Museum, after two former teachers at one-room schools. The building was renovated and restored to its former appearance and furnished with antiques and replicas from the period when it was a schoolhouse. The museum features Peabody-style desks, era-appropriate books and decorations, as well as a potbelly stove. The museum is currently open by appointment, allowing those interested to step into a scene from the past.

Available by appointment only.