The memorial is located next to the tomb that holds the remains of James A. Garfield, the 20th President of the United States. Raised by a single mother from age two, Garfield had to work to support his family. He would become a lawyer and a preacher, as well as a professor and a Union General in the Civil War. He was elected to the House of Representatives and represented Ohio for eighteen consecutive years. Nominated on the 36th ballot of his party in 1880, he defeated the Democratic Party nominee, General Winfield Scott Hancock, by only 10,000 votes. On July 2nd, 1881, President Garfield was shot by Charles J. Guiteau at the Baltimore and Potomac Railroad Station, less than four months into his term, and he died on the 19th.

The James A. Garfield Memorial was erected in 1890. 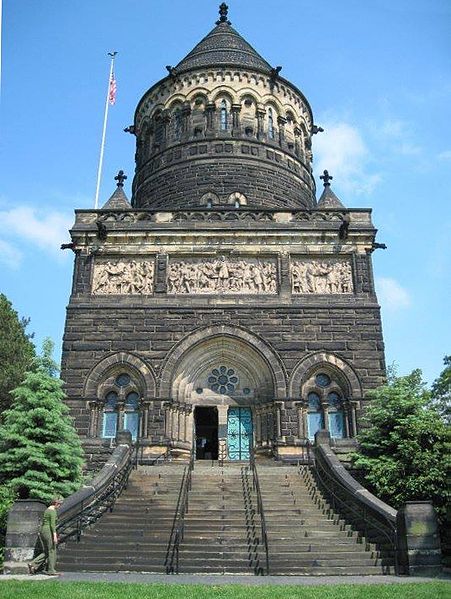 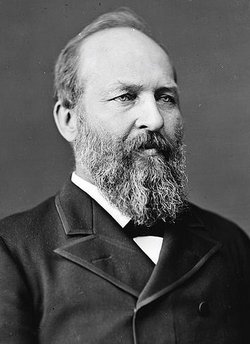 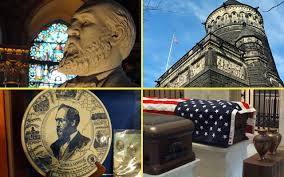 Assasin Charles Guiteau was a disgruntled former campaigner for Garfield. As a Stalwart Republican, Guiteau tried to insert himself into the campaign efforts for Garfield, but he was constantly turned down until he had opportunity to give an impassioned, inflammatory speech to a small crowd of African American voters, in which he alleged a second Civil War would be fought if Hancock, the Democratic nominee, won the presidential election. When Garfield won, Guiteau believed that he was owed compensation and began campaigning for a diplomatic post in France. He dogged the President and the rest of the Garfield administration until the Secretary of State told Guiteau once and for all: "Never bother me again about the Paris consulship so long as you live."1 In retribution, Guiteau shot the President twice, one bullet grazing Garfield's arm, and the other puncturing his vertebrae as it entered his back.

Doctor Bliss, Garfield's doctor, was charged with finding the bullet and healing him. However, doctors probed inside the wound with unsterile hands and instruments. Even Alexander Graham Bell, inventor of the telephone, with his induction balance device--a faulty metal detector of sorts-- tried unsuccessfully to locate the bullet but just exposed the President to more germs as he probed in the wound with his device, not once, but twice.3 The president's suffering would finally end when he died on September 19th from a ruptured aneurysm resulting from the gunshot wound. The autopsy report documents the cause of death as such with a note on his septic condition: "The immediate cause of death was secondary hemorrhage from one of the mesenteric arteries adjoining the track of the ball, the blood rupturing the peritoneum and nearly a pint escaping into the abdominal cavity."4 Some historians now blame the medical professionals' unsterile and unhygienic practices for contributing to Garfield's death.

Garfield is interred at Lake View Cemetery in Cleveland, Ohio. The James A. Garfield Memorial was designed by George Keller with local Berea sandstone. The design follows Gothic, Byzantine, and Romanesque architectures.5 Additional materials in the monument are marble and columns constructed from red granite. The monument was designed and constructed by George Keller and sculptor Caspar Buberl. Its construction went from 1895 to 1890, and cost $135,000. Its tower rises 180 feet high and is 50 feet wide.2 There is a large Italian marble statue of Garfield displayed inside the circular chapel that was sculpted by Alexander Doyle. Five different bas-reliefs that display more than 108 figures of Garfield in his various occupations adorn the monument. The casket of President Garfield is the only presidential casket that is on full display and is draped by an American Flag. The remains of his daughter and her husband are encased in urns beside the President's and First Lady's Caskets.