This battle, adjacent to the modern day "M" mountain in Pima Butte mountain range, north of the town of Maricopa, was the scene of the last battle to rage between two bands of American Indian allies. The mountains belong to the larger Sierra Estrellas mountain range. The battle took place June 1, 1857 and is said to be one the largest battles to take place in Arizona.

1857 of wagons stopping at Maricopa Wells, modern day Maricopa. Mountains in the background is where the battle was fought. 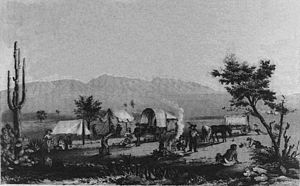 "M" mountain. Battle was fought adjacent to this mountain peak 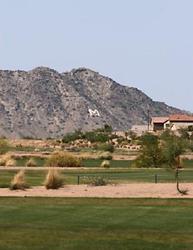 For hundreds of years prior to 1857, the Yumas and the Maricopas were enemies. On many occasions the two tribes would gather their warriors together at the peak of Berdache Mountain. There the two sides would shout insults at each other before fighting a battle. Chief Francisco of the Yuma led the combined army which numbered at least 300 men and they arrived near Secate on May 31, 1857. Francisco began his attack the following morning and captured the Maricopa village and began burning the structures. The Yumas and their allies had just walked 160 miles over the course of eight days so Francisco's men were tired and hungry. As a result, the Yumas and their allies made the deadly mistake of remaining in the burning village to rest and eat the captured Maricopa food.

When Francisco's army attacked, the surviving women and children fled for protection to Pima Butte, which was just to the south of the village. The warriors gathered as well and sent a distress call to the nearby Pima villages. The Pima sent all of their warriors in the area and a counterattack was then launched. But before the Maricopa and Pima arrived, all of the Apaches, Yavapais and most of the Mohaves fled, leaving the remaining Yumas and Mohaves outnumbered. The Maricopa and Pima forces, some mounted on horses, surrounded the attackers before annihilating them. Most of the Yumas and Mohaves were killed, including Chief Francisco. On or about September 11, traveler John B. Hilton visited the battlefield and later wrote that he observed ninety bodies in one spot, lying on the ground in every kind of position.

"....seldom equaled in Indian warfare. It is reported that 150 to 160 allied Indians, being nearly of quite the entire party, were left dead in the field."

The allies referred to the Yuma who after the Yuma War became good neighbors with the Americans on the California side of the Colorado River. In a later article, the San Diego Herald stated the following;

"....from all accounts it would appear that this battle, in which the Maricopas and their allies the Pima so bravely defended their homes, destroying nearly the whole force which came into battle against them, is the largest Indian fight in this region for years."