The Ursuline Campus of the Southwest School of Art

Established in 1851 by a group of seven Catholic nuns of the Ursuline Order, the school first served as an academy for girls. For over a century, the school hosted girls from a variety of nations. After the campus was closed, the buildings began to deteriorate; fortunately, the San Antonio Conservation Society bought some of the original campus and in 1971 began leasing it to a small art school--what would become the Southwest School of Art, now a nationally-recognized leader in arts education. The original Ursuline buildings on the Southwest School of Art campus have been continuously restored and preserved, and the site has been listed on the National Register of Historic Places. Additionally, there is a museum which focuses on the site's history and preservation located on the old Ursuline campus.

The Ursuline Academy was established in 1851 and taught girls from all over the world for over one hundred years. 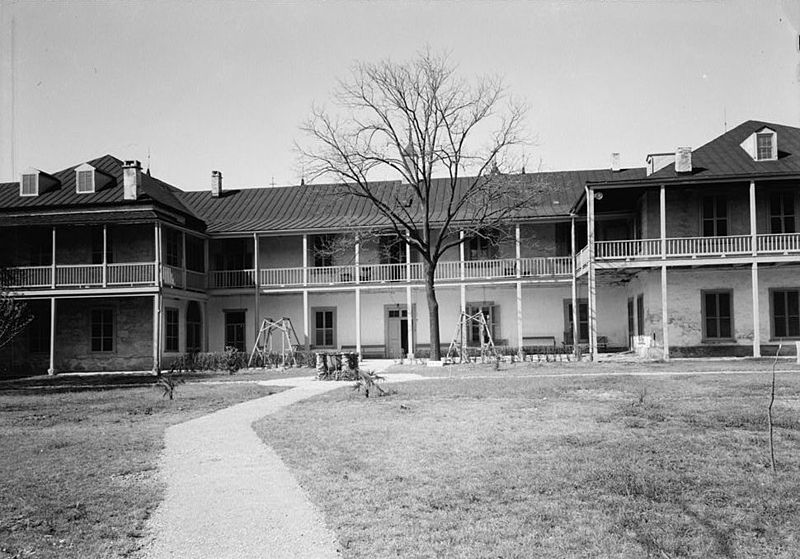 Bishop Jean-Marie Odin requested the order of French Catholic Ursuline nuns to establish a convent and school for girls in San Antonio on 10-acres he had bought from Erasmo Sguin from Ludovic Colquhoun of New Orleans. It was a struggle to construct the school since there were limited funds to work with, but nevertheless, Bishop Odin with the help of French-trained architects Francois Giraud and Jules Poinsard was able to see to it that construction of the First Academy Building was began in 1848 and completed in 1851.

It was an crude structure, but four sisters from the Ursuline’s Mother Convent in New Orleans and three from the convent in Galveston, Texas along with Father Claude Dubuis that all came to establish the school made it work.

Over the next decade, the First Academy Addition and a chapel were added to the campus, and in 1866, the construction of the Dormitory Building was began. In 1868, a larger Chapel was began, and in the 1880s, a Priest's House was added.

According to the Southwest School of Art's website, "The Ursulines remained a cloistered group until 1900, when the order was reorganized at a Papal Conference. By this time, there were 300 students, of whom 40 were boarders. In 1910, Second Academy Building was added as the final building of the original Ursuline complex. It included the Angel Arches and the Angel’s Hall.  These structures are no longer standing."

After over a century of scholarship at the school, the Ursulines relocated the academy to northwest San Antonio in 1965. After the move, the old campus began to deteriorate and rumors about plans to develop the site with high-rise buildings began to surface, so the San Antonio Conservation Society decided to purchase the remaining buildings in an attempt to save the historic property.  The Conservation Society leased the property to the art school, and as according to the online history, "[b]y 1974, the art school had purchased the Dormitory Building and the Conservation Society holdings, and had received the Cook House, (now part of a private dining club, Club Giraud) as a gift. The final purchase in 1980 of the parking lot and River buildings made it possible at last to reunite the original parcels of the old Ursuline Convent and Academy."