San Pedro Springs Park is the oldest park in Texas and the second oldest in the nation. The site became Texas Historic Landmark and listed on the National Register of Historic Places in 1979. San Pedro Springs Park has a long history that reflects the transition of San Antonio from Native American tribes to Spanish colonists and eventually American ranchers and business leaders. Archaeological exploration reveals that the Payaya Indians established a village called Yanaguana at this location. From the first hunter-gatherers to reach this part of the world to the well-established and powerful tribes that controlled this section of Texas while Spain was attempting to establish their colonial claims, the spring has been the center of human habitation for approximately 12,000 years. This location would also be the site where the original Spanish settlement of San Antonio was established in 1718. Part of this settlement, including the spring, was set aside for the use of all residents of the community, making it one of the oldest parks in the United States.

Spanish colonists set this land aside for public use shortly after establishing a mission at San Antonio. 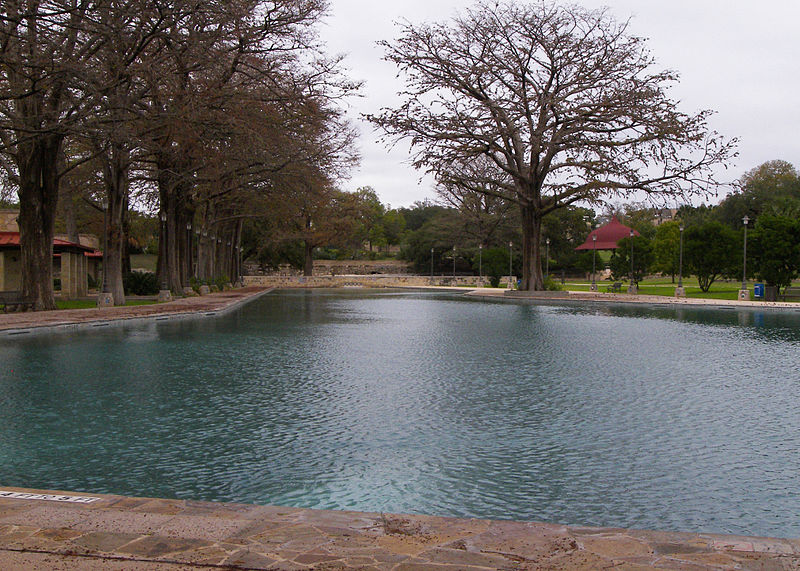 The natural springs and creek found at San Pedro Springs Park have been providing water for people for approximately 12,000 years. First the home of the Payaya Indians, a group of hunter-gathers, the ecologically rich site offered an abundance of edible plants and animals.

The springs were named Agua de San Pedro by a group of Spanish military and clergyman who discovered them in April of 1709. The Spanish established the mission of San Antonio de Valero and a fort named Presidio de Bexar at the springs in 1718. In 1729, the Spanish royal charter deemed the site public land. In 1731, the first permanent settlers relocated from the Canary Islands to San Pedro Springs, and they built canals to assist in farming the land; while most of these constructions have been filled over time, some ruins still remain visible as a testament to those first San Antonio citizens.

During the late 18th and early 19th centuries, while Mexico ruled Texas, the San Pedro Springs site was mostly vacant; however, there was a trading post located there during this time. This all changed once Texas achieved statehood in 1845, however. San Pedro Spings became a well-loved destination for the many immigrant families who lived in town, and sometime in the 1850s, a restaurant and German beer garden were added on site. In 1851, the City of San Antonio designated the original boundaries laid out in the Spanish grant as the official boundaries for San Pedro Park, and in 1864, the city hired landscape architect J. J. Dueler to develop the site. Dueler designed paths, ponds, and bridges; eventually a dance pavilion, bath house, horse racetrack and exhibition hall were constructed as well.

During the late 1800s and into the early 1900s the park transformed into somewhat of a carnival featuring ice cream parlors and concession stands, shops, and electric lighting. In 1910, a zoo was established in the park, and in 1922, the natural lake was converted into a swimming pool. In 1929, a theater and the public library were built, and in 1954, tennis courts were added as was the pool updated.