This historic Art Deco-style movie palace, which was originally called the Comerford Theater, opened August 18, 1938 and was the most luxurious theater in the region for several decades. The theater was also the first to be equipped with air conditioning. Facing possible destruction in the 1970s as downtown theaters were shuttered due to changing consumer preferences, local residents created S.T.O.P. (Save The Old Paramount, as it was once called) and raised funds to preserve the building while also securing its designation on the National Register of Historic Places. Due to their efforts, and the support of Fred M. Kirby II and other donors, the building was not only saved but re-opened as the home of the F. M. Kirby Center for the Performing Arts.

The F. M. Kirby Center for the Performing Arts was built in 1938 and is listed on the National Register of Historic Places. 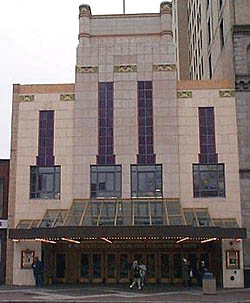