The Chue Buu Mon Buddhist Temple was established in 1980 making it the first Buddhist center in Beaumont, Texas. In 1986 the temple settled into its current location in Port Arthur, Texas. Each year the temple host an annual Lotus Garden Tour where visitors can see the temple’s garden which has become the jewel of Buu Mon Temple. 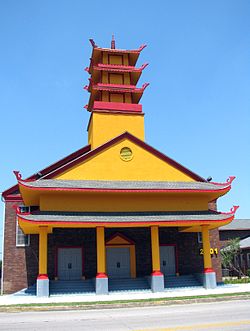 Established in 1980, the Chua Buu Mon Buddhist Temple was the first Buddhist center in Beaumont, Texas. In the beginning, the temple moved to Orange, Texas. It was not until 1986 that it settled into its current location in Port Arthur, Texas.

The building which houses the Chua Buu Mon Buddhist Temple began as a Baptist Church. Then, in 1976, it became a Vietnamese Catholic Church. When the building was obtained by Buddhist, Abbot Thich Huyen Viet and a small congregation moved in. A great deal of renovating and remodeling went on at the former church. Where there was once a steeple, the congregation built a stupa. They also installed a seven foot tall guilt bronze Buddha sitting on an alter in front of a mural displaying a Bodhi tree on a river’s shore. On August 15, 1987 a dedication ceremony was held for the temple.

Venerable Huyen Viet began a garden at the temple in 1988. The garden became the jewel of Buu Mon Temple. The garden began as a few bamboos, and a small water garden. Today, the garden is a major attraction bringing visitors from across the United States to Port Arthur for the annual Lotus Garden Tour.

The Temple’s 7th annual Lotus Garden Tour in 2005 hosted more than 1000 visitors in a single weekend. Twenty Venerables from temples across the U.S. attended as well and city, county and state officials, Catholic, Jewish and Baptist clergy, amateur and professional horticulturalists, Buddhist and Non-Buddhist.