Throughout World War II, Japanese from Oregon, Washington, and California were moved to the Heart Mountain Relocation Center in Park County, Wyoming. This act was in response to an executive order issued by President Franklin Roosevelt. The Japanese here stayed from the 12 August 1942 to 10 November 1945, two months following the closing of WWII with Japan. When the camp reached its peak, it was home to over 10,000 people. 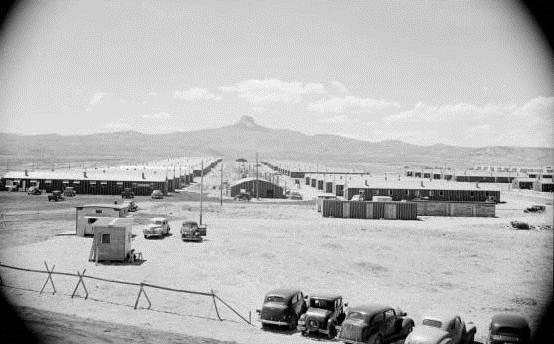 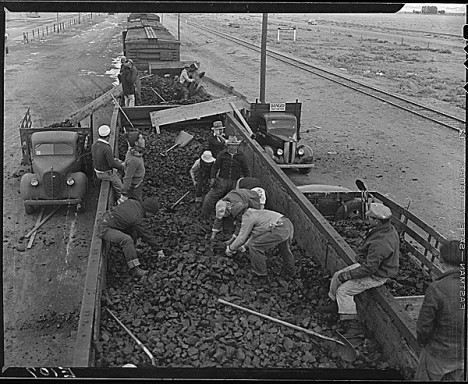 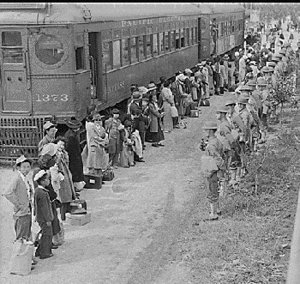 This location was one of ten ordered to isolate 120,000 Japanese Americans that, for the most part, came from the West Coast states.  In order to control the removal and confinement of a group of people of this magnitude, an agency called the War Relocation Administration (WRA) was made.  Ten locations for relocation facilities were chosen by April 1942; California, Arizona, and Arkansas were all home to 2 of these locations, and Colorado, Idaho, Utah, and Wyoming all had one of these locations.  Several people in Wyoming were not too fond of the idea of this center being in the state and instead saw it as a patriotic burden to protect the country.

The first Japanese came to Heart Mountain on 12 August 1942.  The center had 450 barracks, all of which had 6 living quarters; the biggest of these being 24 feet by 20 feet single dorms.  The most noticeable characteristic of the barracks were the tarpaper covers.  Every barrack had a potbellied stove but not a single one had restrooms and therefore the Japanese had to share restrooms.  Not one living quarter had a kitchen, and the Japanese had to eat their food in mess halls.

When the Japanese first came to the center the barbed-wire fence meant to go around the center was not finished.  The internees fought against the building of the fence leading to its building to be slowed down more; in November of 1942 they sent a petition that had 3,000 signatures to WRA Director Dillion Meyer.  Despite this, the fence was allowed to be built and was finished by December; this caused the feeling of being isolated to be intensified for the internees.  For the children living at the camp, schools were constructed; a high school was part of this construction and was finished by the fall of 1943.  The schools were for children from elementary school to high school.  About 1,500 students went to Heart Mountain High School that was made up of grades 8-12.

The internees did most of the work that was necessary to keep the camp functioning, and the WRA administrators controlled its basic operations.  The internees were paid from $12 per month to $19 per month depending on if what they were being paid for was professional or non-professional work; teachers and doctors were part of this.  The internees of this center also were employed as manual laborers on farms and ranches in Wyoming and other states close by from Nebraska to Oregon.  The WRA administrators pushed activities that promoted American civics, like scouting and adult English courses, as a way to achieve an Americanization goal.  The internees here also took part in several events like theatrical and musical events, Christmas celebrations, athletic events, and festivals.  Several of these activities, especially the ones that had Japanese roots, had to have the permission of the project director.  One common event was Obon Odori, which was a festival noticed every summer in several Japanese American neighborhoods.1